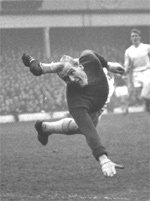 Football lovers need to be warned. They may have a problem with Catrine Clay's Trautmann's Journey, the biography of a goalkeeper whose brilliance and courage inspired a cult-like following that included Sir Bobby Charlton. Their disappointment is likely to be the same one encountered by devotees of angling when they read Moby-Dick, which really isn't about the techniques of deep-sea whaling, no more than Clay's book is about football.

However, there is a huge compensation. Clay correctly identifies an extraordinary story which sweeps far beyond the parameters of any sports field. Almost as remarkable as the fact that the author felt up to tackling both the amazing emergence of a German POW as a hero of post-war, bomb-damaged Manchester, and the growth of Nazism as a poisonous influence on the lives of a generation of young Germans, is that she managed to obtain the full co-operation of the ageing former paratrooper and Hitler Youth zealot.

It is an extremely human story but Bert Trautmann is candid enough about the many times his own humanity was strained. This is no air-brushed sports superstar and it is not hard to imagine the demons and regrets - including the abandonment of a young Lancashire woman who gave him a daughter when he inhabited a strange half-world of token imprisonment and lionisation in the local community - which were provoked when he read Clay's manuscript in his modest retirement home in Spain. 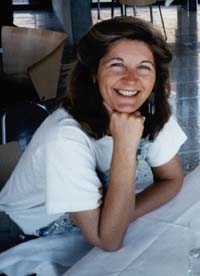 The author's ambitious project was to trace Trautmann's growth from his starry-eyed acceptance of his role as a stereotype for Hitler's concept of an Aryan master race: a tall, blond athlete who took particular delight in Volkerball, a net game which might with some modifications have gone down well in the Roman coliseum, and was an eager fighter of Russian partisans on the Eastern Front.

Clay provides a vivid picture of Trautmann's youth in Bremen, and how it was shaped so profoundly by the presence of the Hitler Youth. Her portrait of the young Bert shows a youth in which any inherent tenderness is progressively brutalised, a process inevitably accelerated by the invasion of Poland and then Russia. Still, Trautmann survived physically and with enough moral antennae to respond to the warmth he received when, after his capture by the Allies on the crumbling Western Front, he took his first halting steps outside the prison camp near Haydock Park racecourse.

The rest is football history, covered in a few glances by Clay but not without proper acknowledgement of the stunning impact of a big, brave goalkeeper. He became a special object of admiration when the Charlton brothers, Bobby and Jack, saved up their earnings as grocery delivery bows and travelled to Newcastle United, where Trautmann's Manchester City were the visitors.

"To us," recalls Sir Bobby, "Bert Trautmann was was not just a goalkeeper but a god. He seemed to be able to fly and he was so brave. Later, when I played against him, my coach Jimmy Murphy, said, 'Never look at him when you shoot on his goal. He can read your thoughts.'"

The Trautmann legend was sealed in football history when he inspired Manchester City to their FA Cup victory against Birmingham City in 1956. He was a superb last line of defence, commanding in the goal area, perceptive and unusually brave. Even City's substantial number of Jewish fans were willing to close the book on Trautmann's enthusiastic contribution to Hitler's war effort.

Clay paints as penetrating a picture of post-war Britain as she does of a Germany sliding into the madness of Nazism, and is particularly effective in describing Trautmann's dawning sense of another way of thinking. He does not travel at jet speed along his road to Damascus, but in the end he elects to stay in his adopted land, much to the pain of his devoted mother back in Bremen.

This is a poignant book which is a tribute to the depth of both Clay's research and her compassion for all those caught up, along with her hero, in the disruptions of war and totalitarianism.

Trautmann's great saves may be conspicuously absent, at least those on the football field. But his greatest achievement is impressively recorded here. It was to survive what for so long was an impossible life.