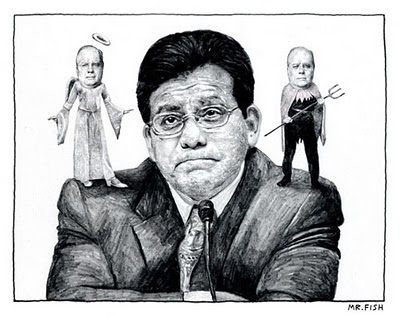 By Scott Shane and David Johnston

It is not known precisely why searching in the databases, known as data mining, raised such a furious legal debate. But such databases, compiled by American companies and stored in the United States, contain records of the phone calls and e-mail messages of millions of Americans. Though the databases do not include the content of the calls and messages, their examination by the government can raise privacy issues.

The data mining by the NSA has previously been reported. But the disclosure that concerns about it figured in the March 2004 debate helps to clarify the recent clash between Attorney General Alberto Gonzales and senators who accused him of misleading Congress and called for a perjury investigation.

The clash in 2004 culminated in a showdown in the hospital room of Attorney General John Ashcroft, where Gonzales, the White House counsel at the time, and Andrew Card Jr., the White House chief of staff, unsuccessfully tried to get the ailing Ashcroft to sign a reauthorization for the NSA program.

Gonzales insisted in testimony before the Senate earlier this month that the 2004 dispute had not involved the Terrorist Surveillance Program, which he defined as the interception of phone calls and e-mail messages in and out of the United States involving people associated with Al Qaeda. He said the fight involved "other intelligence activities."

Because the dispute chiefly involved the use of databases by the NSA, rather than eavesdropping, Gonzales's defenders may maintain that his narrowly crafted answers earlier this month and in previous testimony, while legalistic, were technically correct.

But members of the Senate Intelligence Committee, who have been briefed on the program, called the testimony deceptive.

"I've had the opportunity to review the classified matters at issue here, and I believe that his testimony was misleading at best," said Senator Russ Feingold, Democrat of Wisconsin, joining three other Democrats in calling Thursday for a perjury investigation of Gonzales. "This has gone on long enough. It is time for a special counsel to investigate whether criminal charges should be brought."

The senators' comments, along with those of other members of Congress briefed on the program, suggested that they considered the eavesdropping and data mining so closely tied that they were part of a single program. Both activities, which ordinarily require warrants, were started without court approval as the Bush administration intensified counterterrorism efforts soon after the Sept. 11, 2001, attacks.

A half-dozen officials and former officials interviewed for this article would speak only on the condition of anonymity, in part because unauthorized disclosures about the classified program are already the subject of a criminal investigation. Some of the officials said the 2004 dispute involved other issues in addition to the data mining, but they would not provide details. They would not say whether the differences were over how the databases were searched or how the resulting information was used.

Nor would they explain what modifications to the surveillance program President George W. Bush authorized to head off the threatened resignations by Justice Department officials. An agency spokesman declined to comment on the data mining issue but referred a reporter to a statement issued earlier that Gonzales had testified truthfully.

The Justice Department announced in January that eavesdropping without warrants under the Terrorist Surveillance Program had been halted, and that a special intelligence court was again overseeing the wiretapping. The NSA, the nation's largest intelligence agency, generally eavesdrops on communications in foreign countries. Since passage of the Foreign Intelligence Surveillance Act in 1978, any eavesdropping to gather intelligence on U.S. soil has required a warrant from the special court.

In addition, court approval is required for the NSA to search the databases of telephone calls or e-mail records, usually assembled by phone and Internet companies and including phone numbers or e-mail addresses, as well as the dates, times and duration of calls and messages. Sometimes called "metadata," such databases do not include the words spoken in telephone calls or written in e-mail messages.

Bush has asserted that both his constitutional powers as commander in chief and the authorization for the use of military force passed by Congress after the Sept. 11 attacks gave him legal justification for skirting the warrant requirement. Critics have called the surveillance illegal because it does not comply with the FISA law.