Four companies, led by one lawyer, have used the 'Texas two-step' to divert tens of thousands of lawsuits into bankruptcy court – without filing for Chapter 11 themselves. Now, a whistleblower is providing insight into the secretive process. 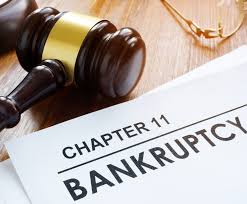 Attorney Greg Gordon sat before a packed hotel ballroom of bankruptcy lawyers who had come to hear him hold court on his pioneering strategy for companies seeking to dodge billion-dollar lawsuits: the “Texas two-step.”

The tactic has made the Jones Day partner a polarizing figure. It involves splitting a company in two, dumping the legal liability into one of the entities, and then putting that new firm into bankruptcy. Companies love it. Plaintiffs’ attorneys hate it. Judges so far seem split on it.

Gordon, grinning at his audience, made a bold claim about his maneuver, which he contends benefits both companies and plaintiffs. The two-step, he said, is “the greatest innovation in the history of bankruptcy.”

The remark prompted laughter at the April bankruptcy conference in Washington. But the two-step is no joke: Gordon’s innovation could radically reshape corporate liability law, legal scholars say, by allowing companies to easily divert any lawsuits against them into bankruptcy court – without filing for bankruptcy themselves.

Gordon has executed the maneuver for four major companies since 2017: Georgia-Pacific, Saint-Gobain, Trane Technologies and Johnson & Johnson. Each faced tens of thousands of lawsuits alleging their products caused cancer and potentially billions of dollars in liability.

And all got the suits suspended by following Gordon’s two-step playbook: First, create a subsidiary to take on liability for the cases. Second, have that subsidiary quickly file for protection under Chapter 11 of the U.S. bankruptcy code – converting the plaintiffs into creditors and forcing them to seek settlements in bankruptcy court.

The upshot for the parent companies: all the benefits of bankruptcy protection with none of the usual financial and reputational wreckage.

Gordon and all four companies he has represented said in statements to Reuters or in court filings that the two-step is legally proper and the fairest way to compensate claimants. Otherwise, they argue, plaintiffs take their chances in trial courts, with a few getting unreasonably large jury awards but many getting nothing. At the conference, Gordon called the two-step process “fair to everyone,” and a superior alternative to the broken system for mass tort claims.Plaintiffs’ lawyers have called the two-step a fraud in court actions seeking dismissals or other remedies. They argue the subsidiaries are essentially corporate shells, with no purpose beyond aiding their parent companies in abusing the bankruptcy system to escape accountability for wrongdoing.

Plaintiffs’ lawyers have called the two-step a fraud in court actions seeking dismissals or other remedies. They argue the subsidiaries are essentially corporate shells, with no purpose beyond aiding their parent companies in abusing the bankruptcy system to escape accountability for wrongdoing.

Those arguments are now gaining traction in the bankruptcy case involving Saint-Gobain. The French construction-products giant used the tactic to shield its North American business from billions of dollars in potential liability for asbestos-related cancers. Lawyers for plaintiff-vPlaintiffs’ lawyers have called the two-step a fraud in court actions seeking dismissals or other remedies. They argue the subsidiaries are essentially corporate shells, with no purpose beyond aiding their parent companies in abusing the bankruptcy system to escape accountability for wrongdoing.

creditors in the Saint-Gobain case have seized on the testimony of a whistleblower – a company attorney who helped plan the bankruptcy.

The whistleblower, Amiel Gross, alleges Saint-Gobain fired him in 2020 in retaliation for sounding an internal alarm about an unrelated health hazard: alleged contamination of drinking water by Saint-Gobain. He became a key figure in the asbestos plaintiffs’ bankruptcy case when their lawyers deposed Gross last year about the planning and purpose of the Chapter 11 maneuver.

Gross testified that Saint-Gobain repeatedly misrepresented its intent in creating the subsidiary that eventually filed for bankruptcy, calling executives’ testimony and other statements “misleading” and “not truthful.” U.S. Bankruptcy Judge Craig Whitley followed Gross’s testimony last August with factual findings that included his own blistering critique of the executives’ statements as “contrary to the evidence,” saying the company’s story “strains credibility.”

Saint-Gobain’s story closely mirrors the one told by executives at the three other companies to counter plaintiffs’ allegations. Accused of contriving a fraudulent bankruptcy as a liability shield, executives of three of the parent companies denied in depositions and filings that they ever directed the subsidiaries to file bankruptcy at all. All four parent firms said their newly created subsidiaries’ boards had decided independently to authorize their Chapter 11 filings, and only did so as a last resort to fairly compensate plaintiffs, after considering other options.

A Reuters examination of court records, deposition testimony and internal company documents casts doubt on these claims, which are central to the companies’ arguments for the legitimacy of the Texas two-step. The records, including Gross’s previously unreported deposition testimony, provide the most detailed account to date of the secretive planning that underpins the revolutionary bankruptcy strategy that experts say could upend U.S. product-liability law.

Each of the four companies launched confidential internal projects – complete with codenames – to plan their two-step bankruptcies for months, according to court records and two people familiar with the matter. Saint-Gobain dubbed its effort “Project Horizon.” Georgia-Pacific, Trane and Johnson & Johnson called their projects Blue, Omega and Plato, respectively. Gordon and the companies he represented didn’t respond to questions about why they planned their two-step bankruptcies in secret.

After creating subsidiaries using a unique Texas law, all four parent companies immediately moved the new firms to North Carolina, where bankruptcy precedents favor companies. (J&J’s case was later transferred to New Jersey). All four subsidiaries declared bankruptcy within about three months of being created. The one created by J&J filed Chapter 11 in less than three days.

Each subsidiary started with fewer than 10 employees, all on loan from the parent company, according to court filings, along with a mountain of lawsuits they couldn’t afford to settle. All the new firms have relatively few assets. The companies avoiding bankruptcy promise to eventually give the subsidiaries enough money to compensate plaintiffs – in exchange for an agreement by plaintiffs to sign away their right to sue the parent in trial courts.

Gross, the Saint-Gobain whistleblower, testified that contrary to their sworn statements, the French company’s lawyers and executives knew from the start of Project Horizon that the resulting subsidiary would seek Chapter 11 protection. And the purpose was clear: to stop the financial bleeding from lawsuits while avoiding all the downsides of a traditional bankruptcy – to “have your cake and eat it, too,” as Gross put it in his deposition.

Saint-Gobain did not answer detailed questions about its two-step bankruptcy case. But in a statement, it said the strategy was aimed at “permanently and equitably resolving all current and future asbestos-related claims through the creation of a trust to efficiently process and pay those claims.” Gross’s claims of being wrongfully terminated were without merit, the company said.

Judge Whitley is also overseeing the bankruptcy proceedings involving Trane Technologies, which declined to comment for this report.

In an August ruling in that case, the judge noted the remarkable similarities among the three Texas two-steps underway at the time in questioning those companies’ claims that they never preordained their subsidiaries’ bankruptcies.

“It is no coincidence that this exact fact pattern and the same alleged ‘options’ are found” in preceding cases, the judge wrote, noting the companies “have been represented by the same law firm.”

The maneuver has become a lucrative specialty for Jones Day. So far, it has billed the four companies for more than $70 million in fees. 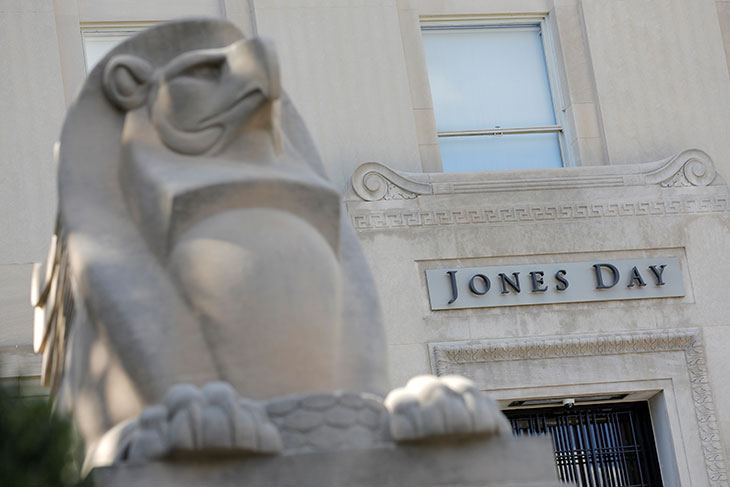 Gordon’s maneuver is called a Texas two-step because the companies use that state’s “divisional merger” law to split the legally imperiled company into two new firms: One to absorb the liability, the other to continue with business as usual.

None of Gordon’s four two-step Chapter 11 filings have received final approval from a bankruptcy judge, but all have succeeded in giving the companies leverage in settlement talks with plaintiffs by suspending their lawsuits, some legal experts say. J&J faced a hail of litigation alleging the company’s iconic Baby Powder and other talc products sickened people. The three other firms faced litigation over asbestos exposure linked to their construction products. 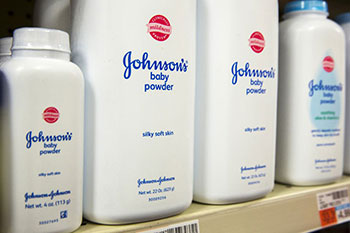 Although the judge in the Saint-Gobain case expressed deep skepticism of the tactic, the judge overseeing the Johnson & Johnson measure explicitly endorsed it. U.S. Bankruptcy Judge Michael Kaplan rejected the plaintiffs’ motion to dismiss the J&J subsidiary’s bankruptcy in February, finding “nothing inherently unlawful” about the two-step. Plaintiffs appealed the ruling.

Bankruptcy proceedings, Kaplan said, are a “preferred approach to best serve the interests of injured tort claimants and their families,” suggesting that “maybe the gates indeed should be opened” to imitators of Gordon.

One potential imitator was a fellow panelist of Gordon’s at the April conference. Jeffrey Gleit, of ArentFox Schiff LLP, said he had initially considered the strategy a fraudulent transfer intended to put corporate assets beyond the reach of plaintiff-creditors. Now he’s coming around to Gordon’s view – and considering the tactic for a client.

“My thoughts on it have evolved,” Gleit said during the panel discussion.

In an interview, he said the two-step can be legitimate if the healthy company adequately finances the subsidiary to compensate plaintiffs.

Companies have often turned to traditional bankruptcies when their finances are overwhelmed by lawsuits over defective products. But they have strong incentives to avoid it: Bankruptcies come at the cost of damage to reputations, credit ratings and relationships with suppliers, customers and employees. Gordon’s strategy offers a way out of those consequences while preserving the benefit of potentially lower legal costs and payouts to plaintiffs. The companies also avoid the reputational and financial fallout from jury verdicts that find wrongdoing and levy damages. ...