... Unlike Prescott's father, George Herbert Walker cared little for the practices that were either honorable or wise. A prime example is his involvement in a plan to extract the last measure of profit from his investment inSilesian-American Corporation, an American company partially owned by the Harrimans that operated mines in Poland.

The investment in Silesian-American was made in 1926, seven years before Hitler was declared dictator of Germany. The acquisition became a moral problem in 1935, when Hitler instituted the Nuremburg Laws that deprived German Jews of their rights to citizenship. Untroubled by morality, Silesian-American investors kept their shares. When the Nazis invaded Poland in October 1939, they seized control of the Silesian-American mines. The American company, unable to pay its bondholders because of the Nazi takeover, declared bankruptcy. Rather than absorb the $2.4 million loss of their investment, Bert Walker and Brown Brothers Harriman decided to do business with the Nazi government.

Since the United States allowed no direct commerce with the Nazis, Bert devised a scheme for a Swiss bank. fronting tje Berman of Silesian-American to buy the shares of the American owners and pay the bondholders. Unfortunately, the Swiss government would come from ores mined in Poland with cooperation of the Nazis. Still, Bert and Brown Brothers Harriman hoped their convoluted plan would appear benign enough to get U.S. approval.

In a confidential memo, Ray Morris of Brown Brothers Harriman wrote to Roland Harriman. "We had the Silesian-Americcan and Silesian Holding company meetings this morning an Bert Walker came through all right, so that there was a unanimous vote in favor of accepting the proposition from the Swiss company and taking the necessary steps to put it into effect."

The U.S, government blocked the plan under Roosevelt's executive orders banning foreign transactions that might aid the Nazis. The pile-driving deal maker reconfigured the scheme for resubmission, but again it was rejected. Undeterred, Bert tried a third, and final, time; the U.S. Treasury once more slammed the door. It was against U.S. policy for the companies to have any dealing with Hitler's Germany after the invasion of Poland.

The willingness of George Herbert Walker and Brown Brothers Harriman to do business with Germany was not unique in those times. Like BBH, quite a few American firms had opened offices in Berlin after WWI and were reluctant to terminate the stream of income. Others, like Sullivan and Cromwell, the New York City law firm of John Foster Dulles, who later became Secretary of State under Eisenhower, took a stand on principle.

Some time after 1935, when the Nazi persecution of Jews could no longer be denied, Dulles was confronted with a partners' revolt. As Townsend Hoopes reported in his book "The Devil and John Foster Dulles," Dulles's law partners informed him they were prepared to resign en bloc rather than continue to do business with Hitler's Germany. Dulles protested vigorously, citing the huge loss of profits that would be incurred by giving up German transactions. The partners remained adamant. Dulles finally capitulated "in tears."

No such tearful meeting ever occurred at Brown Brothers Harriman, Where Knight Woolley and Prescott Bush were the managing partners. In fact, their involvement in Union Banking Corporation from 1924 to 1942 makes them vulnerable to charges of dealing with the enemy. 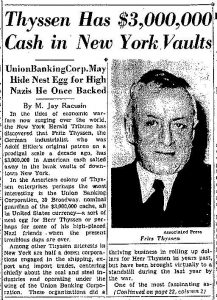 Union Banking Corporation existed solely for the benefit of Fritz Thyssen, a German industrialist who had inherited an empire of steel factories, mines and banks. He met Averell Harriman, the scion of the railroad magnate E.H. Harriman, during the 1920s when both were traveling in Europe. Thyssen told Harriman he was starting a bank in New York to look after his Amerian finanial interests, and he asked Harriman to serve on the board. Harriman turned the matter over to his brother, Roland, who who agreed to join the directorate with a few of his partners. Thyssen's US Bank, a subsidiary of the Dutch bank in Rotterdam, was founded in 1924 and operated out of the Brown Brothers Harriman offices at 29 Broadway in New York. The bank, UBC, opened  an investment account  with Brown Brothers Harriman, which Prescott managed, and Thyssen's bank paid investment fees to BBH. All of this was perfectly legal and quite profitable for both Thyssen and Brown Brothers Harriman for a deade. Hitler rose to power and Thyssen, an early supporter of the Third Reich, became known as Hitler's Angel.