Monsanto Versus the People

Many farmers have decided to forego growing corn and soybeans due to the "inevitable contamination that will result". 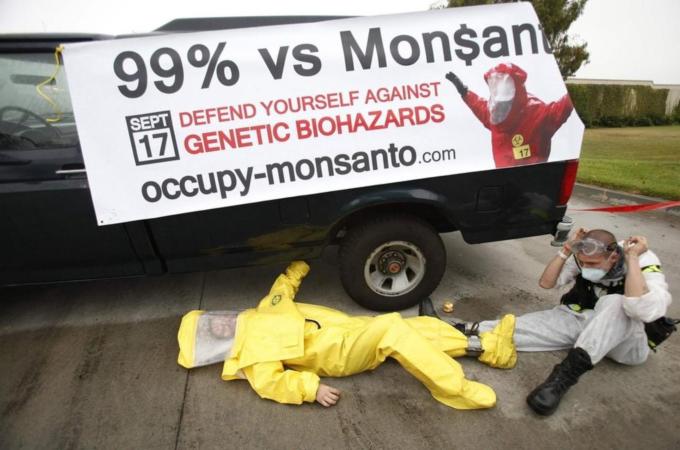 Last week Monsanto announced staggering profits from 2012 to celebratory shareholders while American farmers filed into Washington, DC to challenge the Biotech giant’s right to sue farmers whose fields have become contaminated with Monsanto’s seeds. On January 10 oral arguments began before the U.S. Court of Appeals to decide whether to reverse the cases' dismissal last February.

Monsanto's earnings nearly doubled analysts' projections and its total revenue reached $2.94bn at the end of 2012. The increased price of Roundup herbicide, continued market domination in the United States and, perhaps most significant, expanded markets in Latin America are all contributing factors to Monsanto's booming business.

Exploiting their patent on transgenic corn, soybean and cotton, Monsanto asserts an insidious control of those agricultural industries in the US, effectively squeezing out conventional farmers (those using non-transgenic seeds) and eliminating their capacity to viably participate and compete on the market. (Until the end of 2012, Monsanto was under investigation by the Department of Justice for violating anti-trust laws by practicing anticompetitive activities towards other biotech companies, but that investigation was quietly closed before the year's end.)

The seemingly modest objective of the current lawsuit, OSGATA et al v Monsanto, originally filed in March 2011, is to acquire legal protection for organic and conventional farmers from Monsanto's aggressive prosecution of inadvertent patent infringements. But the implications of the suit are momentous. If the DC Court of Appeal reverses the dismissal, a process of discovery will be instigated that could unveil a reservoir of information, access to which Monsanto has withheld from public knowledge - both by not disclosing it and preventing independent research.

Between 1997 and 2010, Monsanto filed 144 lawsuits against family farmers and settled 700 cases out of court. Furthermore, food groups estimate that Monsanto investigates hundreds of farmers each year as potential culprits of patent infringement.

Victims of Monsanto's predatory lawsuits include farmers who used Monsanto seed but violated the licensing agreement, as well as those farmers who never had any intention of growing GE plants. OSGATA et al v Monsanto deals with the latter group and represents 31 farms and farmers, 13 seed-selling businesses, and 31 agricultural organisations that represent more than 300,000 individuals and 4,500 farms or farmers.

Plaintiffs requested a declaratory judgment that would ensure Monsanto was not entitled to sue the plaintiffs for patent infringement.

Jim Gerritson, president of OSGATA (Organic Seed Growers and Trade Association) and lead plaintiff in the case, explained to me that organic and non-GMO farmers are a "Classic example of why Congress passed the Declaratory Judgment Act: if you have a group that fears being bullied by a large company, they can petition for protection from claims of patent infringement."

But the federal courts have always protected Monsanto's rights to profit via a patenting system that increasingly impinges on individual and market freedom, allowing Monsanto to abuse its patent rights. In a natural alliance, OSGATA is represented by attorney Dan Ravicher and Public Patent Foundation, an organisation dedicated to creating a just patent system that balances individual freedom and the ethical issuing of patents.

Monsanto has established a conveniently intimidating reputation as a ruthless prosecutor of non-GMO farmers whose fields have been contaminated by their neighbours' genetically engineered corn - either through cross-pollination or accidental seed mixing during harvest.

With these terrifying exemplars in mind, farmers have taken on the burden of preventing contamination by setting up buffer zones, conducting genetic testing and in some cases, giving up on planting the crop altogether.

By detailing how many conventional farmers have given up trying to grow certain crops, OSGATA's motion to appeal emphasises the monopolisation that has resulted from Monsanto's aggressive pursuit of patent infringement cases. It is estimated that 88 percent of corn and 93 percent of soybeans are genetically modified, most of them by Monsanto. Bryce Stephens, an organic farmer in the northwest of Kansas, is one of those farmers who have decided to forego growing corn and soybeans due to the inevitable contamination that will result.

"My fear of contamination by transgenic corn and soybeans and the resulting risk of being accused of patent infringement prevent me from growing corn and soybeans on my farm. There is no other reason why I do not grow those crops, and I would very much like to do so."

As Gerritson described to me, "Farmers have suffered economic loss because they've abandoned growing corn and soybeans because they are certain they will be contaminated. They cannot put their farms and families at risk of being sued for patent infringement."

Monsanto knows that consumers won't voluntarily buy their products - a lesson they learned in Europe when GE foods there were required to be labelled as such. In America, the company and its allies have spent millions to defeat local labelling initiatives, most recently in California. But if the company successfully crowds out conventional farmers, Americans won't have a choice - with or without a label.

In spite of the creation of this dangerous monopoly, in February 2012, Judge Naomi Reice Buchwald granted Monsanto's request and dismissed the initial suit, casting the farmers' concerns as "overstated"; urging the plaintiffs to trust Monsanto's (non-legally binding) promises to not exercise their patent rights over inadvertent acquisition of traces of GE plants; and insisting that farmers have created "a controversy where none exists".

If the farmers' case is allowed to go forward, the very least that will happen is of supreme importance: that is, through the process of discovery the public will gain access to a trove of information that Monsanto has successfully stashed away. Ravicher believes that it can then be established that the products Monsanto peddles are not healthy and, hence, are not for the good of society. Quoting a 150-year-old case, Ravicher reminds us that "an invention to poison the people is not patentable".

It's clear that the movement to defeat Monsanto is growing. Win or lose this round, the people are not giving up on taking down this monster.

Charlotte Silver is a journalist based in San Francisco and the West Bank. She is a graduate of Stanford University.