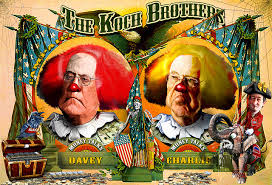 From Sourcewatch: Cause of Action, formerly known as Freedom Through Justice Foundation, according to its website, is a non-profit organization claiming to use “public advocacy and legal reform tools to ensure greater transparency in government, protect taxpayer interests and promote economic freedom.” In June 2013, the organization altered its website to add that it “uses investigative, legal and communications tools” to achieve this mission. It received just shy of a million dollars in funding from the Franklin Center for Government and Public Integrity, a national journalism organization, earmarked “for journalism,” in 2011.

The Executive Director, Dan Epstein, assisted in the investigations of Association of Community Organizations for Reform Now (ACORN), the Service Employees International Union (SEIU), the National Labor Relations Board (NLRB), and the National Mediation Board as Counsel for Oversight and Investigations at the Committee on Oversight and Government Reform for the U.S. House of Representatives. Epstein is an alumnus of the Koch Associates Program run at the time by the Charles G. Koch Charitable Institute and later by the Charles Koch Institute. …

Koch-Backed Group with Ties to Liberal Causes? Critics Call it a Charade

When a small green-energy firm in Connecticut feared that entrenched competitors would box it out of the electricity business, it turned to a surprising, some might say shocking, ally — a nonprofit legal group with ties to the conservative Koch brothers.

It is an unusual alliance. Fuel Cell Energy, the maker of a costly next-generation technology that converts hydrogen into power, depends on the very government subsidies and price supports against which Charles and David Koch and their network of allied groups typically campaign.

But Cause of Action, a small group of lawyers funded by the Koch network, has taken up the green-energy firm’s case free of charge.

The fuel cell company is not the only one. The litigants on whose side Cause of Action has gone to court — all pro bono — include a wind farm in Oregon, a marine conservation activist on the Monterey coast and a Northern California lesbian couple eager to give birth through artificial insemination.

One thing those cases have in common is that the legal challenges oppose policies pushed by the Obama administration: government involvement in energy markets in the cases of Fuel Cell Energy and the wind farm, strict enforcement of wildlife protections in the Monterey dispute, and robust medical-safety regulations by the Food and Drug Administration challenged by the couple.

The clients are “the little guys who are hobbled more than helped by certain agency decision making,” the group’s 31-year-old executive director, Daniel Epstein, wrote in an email. “If taxpayer dollars are going to be spent, they should be spent in a merit-based, transparent and competitive manner that does not reward political cronies.”

Critics of the group call it a sophisticated charade, saying the lawyers trawl for clients like Fuel Cell, whose cases enable them to pursue a Koch brothers agenda in the guise of helping individuals or small firms that liberals might find sympathetic.

“It is an intentional effort to camouflage the actual force behind” the lawsuits, said Karen Skelton, an advisor to California-based Bloom Energy, a dominant firm in the hydrogen energy industry on the opposite side in the Fuel Cell case. “It is designed to be misleading,” she said.

“It is important that clients are sympathetic. Part of the battle is in the court of public opinion.” – Daniel Epstein, Cause of Action executive director

Fuel Cell’s suit, which a judge last year ruled should go to trial, seeks to invalidate a pact between Bloom and the state of Delaware. That agreement set up the country’s first industrial-scale production of electricity from hydrogen fuel cells, using a factory the state subsidizes. Fuel Cell calls the arrangement a corrupt insider deal.

Big oil, gas and coal firms more often associated with the Koch network also have an interest in the outcome. Large renewable-energy firms, like Bloom, have potential to drain customers away from them. They also compete for a limited pool of available subsidies for energy.

The litigation leaves a cloud of uncertainty over efforts to promote hydrogen-generated electricity, industry analysts said. That could discourage venture capitalists from investing and other states from launching programs like Delaware’s.

“For those interests defending the market share of coal and petroleum products, this is a very low-cost stealth effort to disrupt the development of potential competitors,” said Skelton, a former political director to former Vice President Al Gore. (Skelton is the daughter of Times columnist George Skelton.)

Epstein takes exception. “If we win,” he said, Fuel Cell, “a green-energy company in Connecticut, gets to apply for taxpayer money.”

“That doesn’t help the people who are anti-renewable. We take these cases because we want fairness.”

Epstein previously worked as an attorney for the Charles Koch Foundation as well as the House Oversight and Government Reform Committee when it was chaired by Rep. Darrell Issa, the Vista Republican known for relentlessly attacking President Obama. He does not deny the group is strategic in choosing clients to represent.

“It is important that clients are sympathetic,” Epstein said. “Part of the battle is in the court of public opinion.”

That thinking also led Cause of Action to launch a crusade in California on behalf of the would-be manufacturer of an inflatable car.

The firm’s client, XP Vehicles,argued that it could build a cheaper, more practical, hyper-efficient vehicle than California-based Tesla Motors Inc. Energy Department attorneys dismissed that claim, calling the idea of a blow-up car ludicrous. But the litigation is proving potentially embarrassing to the administration and its allies as it scrutinizes major Obama campaign supporters whose companies got the grant money the inflatable-car project did not.

Like most groups funded by the Koch network, the specific sources of Cause of Action’s money are not disclosed. Tax records show that by 2013, its operations were mostly funded by $4.35 million from Donors Trust, a nonprofit group through which the Kochs and their allies distribute tens of millions of dollars without needing to disclose the sources of the funds.

Asked why the donors want to be anonymous, Epstein invoked a precept of the medieval Jewish philosopher Maimonides, who wrote that the highest form of charity is help given “without the expectation of public acknowledgment for one’s good deeds.”

“I suspect this sentiment motivates a lot of our donors,” Epstein wrote.

California Common Cause suspects otherwise. It opposed Cause of Action’s work on behalf of a small oyster farm located in Northern California’s Point Reyes National Seashore. The farm’s owner attracted potent political liberal and Democratic supporters, including Sen. Dianne Feinstein, when the government decided not to renew its lease.

Cause of Action’s involvement “was about big money pushing to privatize public lands,” said Helen Grieco, an organizer with California Common Cause. “This was not just about a tiny oyster farm.”

Whatever its goals, Cause of Action’s tactics in that fight ultimately made some of its allies uncomfortable. The oyster farm dropped its affiliation with the group after the lawyers demanded to see unused footage from an unflattering PBS news report about the dispute.

But that fracas has not deterred the group from pursuing high-visibility cases. Nor will the insinuations by opponents that it works as a stalking horse for the Koch brothers’ broader political agenda, said Epstein.

“We do not litigate to end government spending or end all regulation,” he wrote. “We litigate to protect the process.”