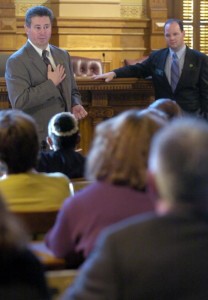 ATLANTA (AP) - A strategist and spokesman for a Republican running for Congress in southwest Georgia has resigned following his indictment in a vote-buying case in Alabama.

Jay Walker resigned Monday as a consultant for Republican Mike Keown who is running against Democratic Rep. Sanford Bishop. Walker was a strategist and spokesman for the Republican candidate.

Walker was among nearly a dozen defendants charged in an indictment announced Monday. It accuses the owner of Alabama's largest casino, four state senators and several lobbyists of conspiring to buy and sell votes to get electronic bingo legalized.