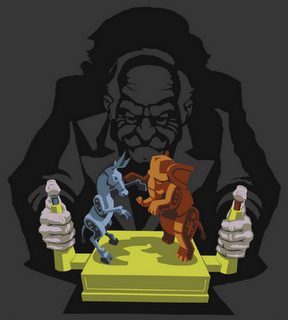 Some ACORN dude registered Mickey Mouse to vote, which is so much worse than this:

A former [Pennsylvania] House speaker, an ex-lawmaker and eight aides Thursday became the latest — and the first Republicans — to be charged in a three-year-old investigation into the diversion of public resources and employees to legislative campaigns.

Attorney General Tom Corbett said that individuals within the House GOP caucus spent millions of taxpayer dollars on computer technology to gain an upper hand in campaigns, and that investigators can prove that some high-ranking officials and their employees tried to cover up their part.
AG Corbett, by the way, is a Republican.

The charges of theft, conspiracy, conflict of interest and obstruction of justice, and an accompanying 188-page grand jury report, were released Thursday, and the defendants were scheduled to turn themselves in today at a Dauphin County district judge’s office.

The most prominent defendant is state Rep. John M. Perzel, R-Philadelphia, who served as speaker for nearly four years and as majority leader for nearly a decade before that.
How much did these Republicans steal from the public for their own nefarious purposes?

The grand jury calculated that the House Republican caucus spent more than $20 million between 2000 and 2007 to help its candidates prevail.

The state should make the Pennsylvania GOP pay this money back.