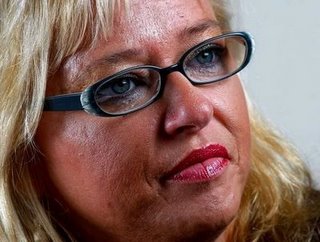 Thanks in part to the double murder charges filed in Arizona against ex-Seattle prostitute Shawna Forde, one of the country’s largest Minutemen border-patrol groups is killing itself off. Unfortunately, thanks in great deal to Barack Obama living up to a campaign promise approved by a majority of Americans, smaller factions of the armed militant group will refocus their protests on health care and other “socialist programs” (though not, apparently, Medicare, Social Security, VA hospitals, education and public safety, to name a few).

“The cause is still securing the border, enforcing the law,” said Carmen Mercer, president of the 12,000-member Minuteman Civil Defense Corps based in Arizona. “The movement itself, the organization itself, is not going to go away, [it’s] just the dissolving of the corporation.”

She told KOLD-TV of Tucson some members want to “pursue outrage against healthcare and other government policies,” but any new, stand-alone chapters would be responsible for their members’ conduct, adding, “It only takes one bad person to destroy everything we’ve built in the last eight years.”

A person such as Forde, for example.

The former Everett beautician and city council candidate is accused of leading a lethal home invasion in a town south of Tuscon last year, leaving a man and his daughter dead. Forde, along with Gunny Bush of Wenatchee – who faces murder charges in at least two other Washington slayings – and a third accomplice, are in jail awaiting trial and could face the death penalty.

Kat Rodriguez, a coordinator for human rights organization Derechos Humanos, says the Minutemen, despite attempts to portray members as merely patriotic “retired folks who come out with their binoculars and floppy hats to patrol the border, ” have attracted an element that is dangerous, Forde among them.

But, says Minutemen leader Mercer, her group expelled Forde prior to the killings, and the border patrol members were simply “the greatest patriots” she ever worked with, “and I get goose bumps just talking about them.”

Look for them now at a Tea Party near you – party rallies are already listed on Mercer’s home page.