“Republicans are Becoming Irrational and Dangerous” 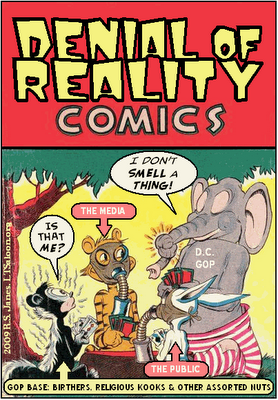 GOP politics are being reduced to a terrifying absurdity. Republicans are praising right wing terrorists. Republicans are joking about Obama Tags and political assassination while longing for a great white hope. The sky is turning grey and Republicans are losing their collective mind.

Rex Rammell, GOP candidate in the 2010 Idaho governor’s race, recently made a joke about hunting and killing President Obama.

Rammell’s ‘joke’ was made to a local Republican group about the state’s wolf hunt, for which hunters must pay for “wolf tags.” An audience member shouted out a question about “Obama tags.”

“Obama tags? We’d buy some of those,” Rammell responded.

Rammell said he won’t apologize for the comments

According to news reports, at a recent town hall meeting at Simpson University in Redding, Ca., 67-year-old Bert Stead rose and declared himself a “proud right-wing terrorist.” U.S. Rep. Wally Herger (R-Calif.) replied. “Amen, God bless you. There is a great American.”

Wally refuses to offer an apology.

Jenkins, to her credit, did offer an apology.

Republicans are becoming irrational and dangerous. Showing up armed at town hall meetings, claiming Obama is not an American, comparing Obama to Hitler, all speak to a disturbing disconnect from reality, a disconnection with decidedly violent tendencies.

So far Republicans have tried to make light of these episodes, to write them off as being harmless, minor slips of the tongue with no real consequence. They are wrong. Their denial is dangerous.

Words have power. Jokes about assassination, claims that Obama is not a true American, praise for self identified right wing terrorists, thoughtless racism, all contribute to an air ripe for an unspeakable violence.