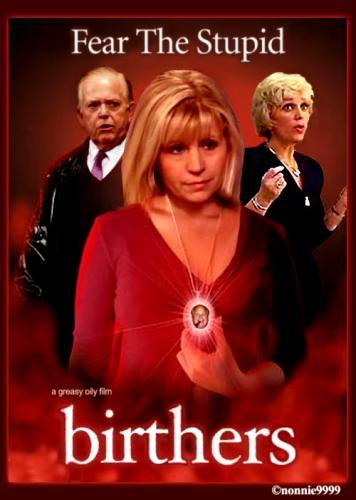 The Birthers are back.

They never really went away, actually -- in all likelihood, unfortunately, they never will -- but the people who believe President Obama doesn't meet the Constitution's eligibility requirements for his office have at least faded from the news lately. Now, some are working to change that, and they have a new figurehead to rally behind.

Last week, the American Patriot Foundation announced that Army Lt. Col Terrence Lakin, a flight surgeon, has decided that he'll refuse to obey any and all orders because of his concerns over the circumstances of Obama's birth and birth certificate.

"I am today compelled to make the distasteful choice to invite my own court martial, in pursuit of the truth about the president's eligibility under the constitution to hold office," Lakin said in a release. (He's also spoken in a YouTube video about his decision; it can be viewed at the bottom of this post.)

Lakin isn't the first member of the military to become a Birther cause celebre. The case that brought the now-infamous Orly Taitz her first real mainstream media attention involved another one.

In the past, the impetus for including military men and women in lawsuits had to do with the fact that to bring suit successfully a plaintiff must have what's known as standing; at minimum, they have to show some sort of particularized injury. In other words, the average person can't get much past the courtroom door if they sue Obama for his records, saying they're entitled to them as a voter -- there has to be some way in which they'd be more directly affected if he were in fact ineligible. So the various Birther attorneys came up with a plan: Members of the military have to take orders from the president in his capacity as commander-in-chief, so, the theory went, they should have standing. It was at least creative, but it's also proven unsuccessful for reasons including and beyond the standing issue. Taitz's behavior in one of the cases even brought her a $20,000 sanction from one federal judge fed up with her antics.

This time, though, there's no lawsuit on the horizon, Margaret Hemenway, a spokeswoman for the American Patriot Foundation, told Salon. Instead, Lakin appears content to wait for a court-martial, possibly with the hope that if the Army did try him, he could seek Obama's birth certificate as part of the case. The foundation is working to raise money for Lakin's defense in the event he is brought up on charges, and Hemenway says he has a legal advisor, though she declined to name him. (Hemenway did say she'd pass on a message to the advisor in case he wanted to talk to Salon, but as of this post, there's been no word back.)

The Army is aware of Lakin's pledge, spokesman George Wright said Thursday. But so far, there's no word on whether the lieutenant colonel will get the disciplinary action he seems to welcome.

"I can say that Lt. Col. Lakin has stated his intent to violate articles 87 and 92 of Uniform Code of Military Justice, but he has not done so," Wright said, adding that it will be up to Lakin's chain of command to decide whether his actions thus far violate any regulations. Asked whether, if Lakin follows through on his vow, he'd be likely to face court-martial, Wright would say only, "I can't speak to that case, but I can say that for soldiers who refuse to follow orders, in particular soldiers who refuse to deploy under combat, there are possible consequences for those actions."

Hemenway herself has something of a pedigree in the Birther movement. Her father-in-law, John D. Hemenway, faced sanctions for his role as local counsel in a suit brought by the original Birther lawyer, Philip Berg, on behalf of a retired Air Force colonel. The judge ended up opting not to fine her father-in-law, butt that experience is part of what prompted Margaret Hemenway to get involved with the cause generally and this case specifically.

A former Congressional and Pentagon staffer, Hemenway currently writes for outlets such as Family Security Matters, a Web site affiliated with the Center for Security Policy, run by influential neo-conservative Frank Gaffney. (Gaffney himself has expressed some solidarity with the Birthers, and wrote an op-ed for the Washington Times in which he pronounced Obama our first Muslim president.)

One of the members of Congress Hemenway worked for is former Sen. Bob Smith, R-N.H., who served two terms before losing a reelection bid in 2002. Smith, who'd flirted with a run for Senate in his new Florida home recently but dropped out of the race, also happens to be the founder of the American Patriot Foundation. As a result, at least one blogger had suggested the former senator might somehow be involved in the foundation's efforts on Lakin's behalf. Reached at home last week, however, Smith told Salon he no longer controls the group, which had essentially been dormant since its founding in 2003 -- he handed it over to a friend. (Hemenway confirmed this.)

Asked whether he supported his former foundation's work for Lakin, Smith said, "I'm just gonna stay out of that right now, I think that my personal belief is that when an officer has a constitutional question I don't have a problem with that being answered, that's his legal right to have that answered, but I'm not involved in it."

This whole thing can ultimately be traced back to the same misinformation that has animated other elements of the Birther movement from the very beginning. In speaking with Salon, for instance, Hemenway repeatedly said Obama hadn't released the same birth certificate Lakin would have to show the military -- but the certification of live birth the president made public during his campaign is the official copy that Hawaii now provides everyone who requests their own records. The foundation's Web site also cites myths like one about Obama's step-grandmother confirming that he was born in Kenya; in fact, after an initial miscommunication -- or mistranslation -- during the conversation in question, she and Obama's other Kenyan family members all repeatedly emphasized that he was born in Hawaii.

Decorated Army flight surgeon Lt. Col. Terrence Lakin says he will not comply with orders to deploy to Afghanistan until President Obama releases his birth certificate.

“I am today compelled to make the distasteful choice to invite my own court-martial, in pursuit of the truth about the president’s eligibility under the constitution to hold office,” Lakin said in a YouTube video being circulated by Safeguard Our Constitution, an organization raising money for Lakin’s legal defense.

“If he is ineligible, I believe my orders and all orders are illegal,” said Lakin, 45. “Any reasonable person looking at the evidence in the public domain would have questions about President Obama’s claim to be a natural-born citizen.”

Lakin has been in the Army 18 years, is assigned to an Army health clinic at the Pentagon, and he is a recipient of the Bronze Star and various service medals.

As of April 2, the Army had not taken action against Lakin. Army spokesman George Wright noted Lakin has only expressed an intent to violate Uniform Code of Military Justice articles related to missing movement and disobeying orders.

“Lieutenant Colonel Lakin is free to express his personal views. The Army has no comment on his concerns, nor the views that he espoused,” Wright said. “Whether his actions to date violate any law or policy is for his chain of command to determine.”

The American Patriot Foundation, an organization that questions whether Obama was born in the United States, is championing Lakin. Margaret Hemenway, a spokeswoman for the group, said although the Army has not taken action against Lakin, he has nevertheless retained an attorney.

Hemenway said Lakin, who is due to be promoted to colonel, was risking his career for his principles.

“I think he’d like the president to say, ‘I need everyone to deploy and I’ll release my records,’” Hemenway said.

He is not the first soldier to refuse to deploy overseas citing questions over Obama’s presidential legitimacy. Two soldiers represented by California attorney Orly Taitz, who has lodged a well-publicized campaign to challenge the president’s citizenship, have made similar claims.

In July, Maj. Stefan Frederick Cook, a reserve soldier who sought a temporary restraining order and status as a conscientious objector by the same justification, had his deployment orders revoked.

The issue was largely relegated to fringe groups after Obama released a copy of his Certification of Live Birth from the state of Hawaii in 2008. It said he was born in Honolulu in 1961, two years after Hawaii became a state.