Last September Mark Williams, a tour partner with the Tea Party Express, referred to President Obama as "our half white, racist president." 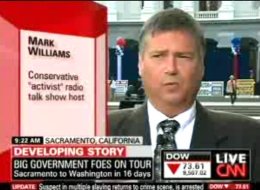 In a September email obtained by Talking Points Memo, Williams angrily responded to what he calls a "false allegation" by CNN that he called President Obama a Nazi. In an apparent attempt to demonstrate he is not racist, Williams claimed to have a strong record on civil rights. He spoke of "marching for civil rights while asshole southern sheriffs were swinging nail-studded bats at blacks's heads..." On September 14, 2009, Mark Williams admitted to CNN's Anderson Cooper that he referred to "Mubarak Hussein Obama" as a Nazi:

COOPER: But wait Mark, you're actually the one who called President Obama Nazi.WILLIAMS: I didn't call Barack Obama a Nazi.

COOPER: Yes, he's on your list, on your Web site of like 21st century Nazis. You have his name.

WILLIAMS: We've got the philosophy of fascism and national socialism at work here. Of course we do.

COOPER: No, no but you have the president's name, although it's a derivation that's not his actually name, it's a name it's kind of a negative.

COOPER: Right, that's what's you call him on your Website. You're the one who's using the term Nazi.

Tea Party Express, a series of nationwide anti-Obama bus tours, is frequently decried as "astroturf", or fake grassroots, by other aspects of the Tea Party movement, notably the Tea Party Patriots, due to its associations with Our Country Deserves Better PAC, which is run out of the Republican strategy firm Russo Marsh.

Williams acts as a spokesman for Tea Party Express.

Robin Stublen, a leader of the Tea Party Patriots, told HuffPost in an email, "Mark Williams is not someone I would want being my spokesman. He comes off as an arrogant, self promoting, egotistical jerk. In politics, people like Mark Williams are a dime a dozen, even when you factor in inflation."

Williams concluded his September email by inexplicably refusing to defend himself:

I will defend my record on race to no one (sic), under any circumstances and, I will call out any racist, any time without regard to who they are ... and that includes our half white, racist president.