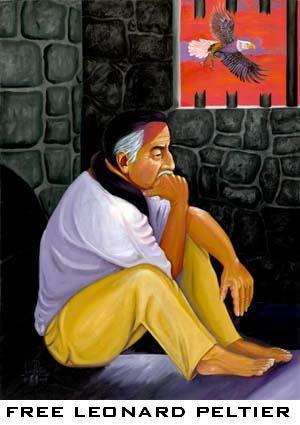 Leonard Peltier is now starting his 35th year in prison.

He is 65, and more than half his life has been spent as a prisoner.

Impassioned supporters who argued for justice and his freedom in the past, have grown silent.

Bored, frustrated, exhausted, they have died, or become involved in other causes.

Peltier has faded in memories.

These include Amnesty International, for whom Peltier is still a political prisoner of conscience.

His defenders include Nelson Mandela, the Dalai Lama, Archbishop Tutu, the archbishop of Canterbury, members of the European Parliament, some 50 Canadian MPs, Hollywood mogul David Geffen, and various Leonard Peltier defence committees around the world.

Most have dropped by the wayside.

Robert Redford made a movie about him: Incident at Oglala. The Belgian and Italian parliaments espoused his freedom. They’ve joined the ranks of the silent — not because anything has changed, but because Washington wouldn’t listen. Somewhat sheepishly, I admit, to having been sidetracked to other issues over the past 15 years.

At each, he was jumped, beaten, threatened with death by so-called native inmates when in general population. Provocateurs? Who knows?

Peltier insists his only enemies are the system and justice department.

In the past I (and others) argued that the case against Peltier was not only flawed, but grotesquely dishonest, unfair and unjust, replete with admittedly perjured testimony and fraudulent evidence by the FBI.

No longer should guilt be an issue — Peltier is not a conventional criminal or felon.

Even if one believes he was guilty, he has served enough time and deserves to be free. But no — that’s not the American way in his case.

Peltier was found guilty in the 1975 shooting deaths of two FBI agents — Ron Williams and Jack Coler — during a range war on the Lakota-Sioux reserve at Pine Ridge, S.D., near Wounded Knee where, in 1973, there was a highly publicized 71-day siege.

The Pine Ridge range war was between traditional, back-to-our-roots Indians, and “progressive” mixed-blood Indians who favoured the mining of uranium on Indian land.  The militant American Indian Movement (AIM) sided with the traditionalists, while the FBI, Bureau of Indian Affairs (BIA) and authorities backed the progressives. The FBI had labeled AIM a terrorist organization, trained and financed by Castro and the Soviet Union — phony charges, evolving from Cold War paranoia of the day. AIM was (is) an Indian advocacy group.

In a three-year period at Pine Ridge, over 60 murders occurred, not one of which was ever investigated, much less solved.

On the day Coler and Williams died — chasing a “red pickup truck” into the Jumping Bull community, allegedly driven by Jimmy Eagle who was believed to have stolen some cowboy boots — another young Indian, Joe Stutnz, was shot and killed. No investigation was ever held.

Shots were fired and returned. Some 125 bullet holes were found in the two FBI cars. Peltier was one of four Indians charged with murder, but he fled to Alberta where eventually he was turned over to the RCMP.  The other three went on trial, where one had charges against him dismissed.

The other two, Bob Robideau (since deceased) and Dino Butler, were found not guilty, having fired in self-defence.

The prosecution’s circumstantial evidence against them was too thin to get a conviction.

At Peltier’s extradition hearing in Vancouver, the FBI produced affidavits by one Mabel Poor Bear, claiming she was Peltier’s girlfriend, and had witnessed him shooting the FBI agents at close range. It subsequently turned out Poor Bear was a mental case, had never met Peltier, and was nowhere near the murder scene.

She later tried to recant, claiming she didn’t even know what Peltier looked like, and claimed the FBI threatened to take away her child if she didn’t sign the affidavit.  The trial court judge refused to hear her testimony. But her fabricated affidavit got Peltier extradited. (Canada’s solicitor general at the time was Liberal MP Warren Allmand, who supported the extradition, but later became one of the strongest advocates on behalf of Peltier, urging the U.S. to review his case.)

At a parole hearing in 1995 Crooks said if there was a retrial “the government could not re-convict.”  Parole was rejected because Peltier was the only one they had, even though the court ruled that the FBI’s suppression of evidence “cast strong doubts” on the government’s case. The jury heard none of this.

Radical left-wing lawyer William Kunstler (now deceased) represented Peltier at his appeal — and mishandled key evidence which the 8th circuit appeal judge, Gerald Heaney (since deceased), later said would probably have gotten Peltier freed, or a new trial if he, the judge, had known the facts. Kunstler apologized, and urged the judge not to penalize Peltier for his mistake.

I interviewed Judge Heaney who said he had urged then-president Bill Clinton through Hawaii Sen. Daniel Inouye, to have Peltier granted clemency. Clinton had indicated he’d grant executive clemency to Peltier, but changed his mind when some 500 FBI agents, retirees and families demonstrated outside the White House. Instead, Clinton pardoned Marc Rich who was indicted for illegal oil deals with Iran, and tax evasion.

In their book Game Change, authors John Heileman and Mark Halperin note that billionaire David Geffen had lobbied Clinton to pardon Peltier whom he felt was innocent. When Clinton pardoned Rich, Geffen saw this “as a sign of corrupted values,” and backed Obama for the presidency instead of Hillary Clinton.

In prison, Peltier has had a rough time. At Leavenworth his jaw was atrophying without medical attention — until publicity got him treatment.  He is going blind from diabetes, has kidney failure and is susceptible to strokes. He feels occasional beatings by inmates are stage-managed, but says what cannot be taken from him are “my dignity and self-respect ... even if I die here.”

The law, in 1976, was that inmates with a good record after 30 years should get mandatory release. When Peltier’s 30-year parole hearings came up, he says “five FBI and government witnesses hammered me for over five hours that I should not be released ... so the parole board gave me another 15-year sentence” (His next parole hearing is in 2024).

Peltier’s appeal of the parole board decision, has already been rejected , despite acknowledgement of his unblemished prison record.  Prior to rejection he wrote me: “I am waiting for them to destroy my appeal. I can’t see these same parole commissioners changing their minds, so I know what I’ll get. Next I will file in the federal courts, as we have some strong expert issues to file on. I have no doubt we can kick some butt in court, but even if I win, it will take five or 10 years before all the appeal processes take place, so you can consider the 15-year hit as a death (a slow-one) sentence.”

What stands out in Peltier’s case is the vindictiveness of the FBI and the justice system.  With the absence of clear proof who shot the agents in 1975, the FBI is determined that someone — anyone — must be held responsible. Had Peltier not escaped to Canada, and had he gone on trial with Robideau and Butler, he, too, would have been acquitted.

Flaws in the case include the FBI changing the “red pickup truck” to a “red and white van” — owned by Peltier, three prosecution witnesses recanted and claimed intimidation forced their compliance, the jury heard nothing of the FBI’s suppression of evidence or its being rebuked by the court, fraudulent ballistic evidence withheld from the jury and the FBI’s later admission that “we do not know who killed the agents.”

Author Peter Matthiessen’s book on Peltier’s case, In the spirit of Crazy Horse, was delayed seven years to 1992 because of FBI legal suits against its publication.  In it, Matthiessen interviews a “Mr. X” who alleges he was the one who fired the fatal shots into the FBI agents. I became convinced that Mr. X was Bob Robideau, whom I phoned in Spain and questioned him. He equivocated.

When I phoned Judge Heaney, of the 8th circuit appeal court, he also implied Robideau might have been the shooter.

If so, “he had already been found not guilty of murder and could not be tried again,” Heaney said.

After 34 years in prison, and considering the political and social unrest at the time of the 1975 Pine Ridge Indian wars, Peltier’s guilt or innocence is irrelevant. Simple justice and compassion dictate he should be freed.

Recently, a new generation of Peltier defenders have emerged — one of whom — Kathi Robinson in Manitoba — Peltier has encouraged.

Peltier’s eventual release may hinge on clemency from President Barack Obama — presuming Obama has the courage to reject the FBI’s continuing thirst to punish a man they helped frame for murder.