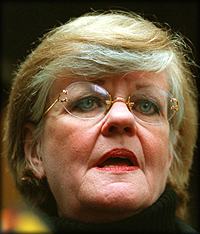 "For anybody willing to find it, and write about it, and explain it, is this vast right-wing conspiracy that has been conspiring against my husband since the day he announced for President. A few journalists have kind of caught on to it and explained it, but it has not yet been fully revealed to the American public. And actually, you know, in a bizarre sort of way, this may do it." -- Hillary Clinton on NBC's Today, Jan 27, 1998

In an otherwise low-key question-and-answer session, Hillary Clinton was at her most intense when asked whether she favored curbs on the Internet, on which news services have several times made headlines themselves with their coverage of the president's purported affair with a White House intern. "We are all going to have to rethink how we deal with this, because there are all these competing values.... Without any kind of editing function or gatekeeping function, what does it mean to have the right to defend your reputation?" she said. -- Reuters, Feb 11, 1998

Here is a circumstantial chain of connections, available for desperate Clintonistas to seize on, in their anticipated efforts to suggest that their wonderful leader was set up:

WASHINGTON -- Linda Tripp is a professional handler of secrets. Lucianne S. Goldberg makes a living selling them. They made an incendiary match....

White House officials wondering how a trusted aide came to create such a potentially deadly political weapon may look to Tripp's experience working for highly classified Army intelligence and commando units in the 1980s. As an aide to the Delta Force, she knew that keeping and maintaining secret records is crucial in a crisis, she said in sworn testimony four years ago.... "I've worked on the covert side of the Department of Defense," she testified before a House committee investigating the [Vince Foster] suicide....

The third operation belonged to Murray Chotiner. It was a sequel to a similar scheme he had directed in 1968. Chotiner hired two writers to pose as reporters with the Democratic campaigns and send back reports to him under the code name "Mr. Chapman's Friends." ... The first of Mr. Chapman's Friends was Seymour K. Freidin, a veteran journalist then working as a free-lance writer. Freiden had supplied intelligence on the Humphrey campaign for Chotiner in 1968. In March 1971 Chotiner hired Freidin again -- at $1000 a month -- and he reported on the Muskie campaign and others intermittently until August 1972.... In August 1972 he was replaced by another writer, Lucianne Goldberg, who reported on the McGovern campaign that fall. "They were looking for really dirty stuff," she says. "Who was sleeping with whom, what the Secret Service men were doing with the stewardesses, who was smoking pot on the plane -- that sort of thing."

In August, 1973, it was learned that a free-lance writer, Lucy Goldberg was paid $1,000 a week by the Republican Party during the 1972 presidential election campaign to keep tabs on the Democratic Party's candidates. Miss Goldberg is said to have received a total of more than $10,000 plus expenses. Another free-lance journalist, Seymour Freidin was paid over $10,000 by the Republicans for similar services. Then Jack Anderson wrote in his column that Seymour Freidin was a CIA agent. Freidin apparently realized that Anderson had the proof, so, when other wire service corespondents asked him whether this was true or not, he did not deny it. "I gave my word to Dick Helms," he said, meaning Richard Helms, CIA director 1966-1973.

It was a remarkable operation, and it ran on information. According to Strachan, it was common knowledge in the Nixon camp that they were getting information from Senator Muskie's driver. "Fat Jack" (John Buckley) covered Muskie's Washington headquarters. "Chapman's Friends" (Seymour Freidin and Lucy Goldberg) posed as reporters on the campaign planes, and "Sedan Chair II" (Michael W. McMinoway) posed as a volunteer security guard at the Democratic convention. It was "Sedan Chair II" who reportedly overheard Mankiewicz discuss the health problems of Senator Thomas Eagleton.

In 1972, Goldberg told the McGovern campaign that she worked for the North American Newspaper Alliance and later for Women's News Service. The addresses she listed for both agencies then is the same as her current residence on the Upper West Side of Manhattan.

Comment:  Alongside Goldberg's possible acquaintance with confirmed CIA agent Seymour Freidin, her 1972 claim to be affiliated with the North American Newspaper Alliance takes on additional significance. NANA actually existed, but it was infested with CIA connections, as JFK assassination researchers eventually discovered. Priscilla Johnson McMillan, who had numerous CIA and State Department links, was working for NANA when she interviewed Lee Harvey Oswald in Moscow in 1959. Another NANA reporter, Virginia Prewett, was an anti-Castro activist recruited by NANA founder Ernest Cuneo, a high-ranking OSS veteran. In the mid-1960s, NANA was acquired by a partnership between Leonard Marks, Drew Pearson, and Fortune Pope. In 1952, Fortune Pope's brother, Generoso Pope, Jr., bought the National Enquirer. The previous year Generoso was a CIA officer (according to Generoso's listing in Who's Who in America, 1984-85). Marks and Pearson were also friendly with the CIA.

Information received from an Internet reader:

"Although Luci is usually identified as having worked for NANA, she was actually a reporter for a subservice called the Women's News Service. ... Her husband Sidney Goldberg, was ... at NANA."

Her husband is in Who's Who in America, 1984-85 (note the extensive, high-level association with NANA):

From an article by Frank Greve and Ron Hutcheson, Knight-Ridder/Tribune Information Services, February 6, 1998:

Goldberg came to share her husband's conservative views, and his close friendship with Victor Lasky, a stridently anti-Kennedy, anti-Communist columnist that Mr. Goldberg's syndicate published. In 1972, Lasky introduced Mrs. Goldberg to Murray Chotiner, Richard Nixon's first dirty trickster. He'd directed Nixon's 1946 smear campaign against Rep. Helen Gahagan Douglas, claiming she was a "pink lady" - a communist sympathizer. Chotiner recruited Goldberg to spy on McGovern. To gain press credentials, she said she was writing for the Women's News Service, edited by her husband, to which she had sometimes sold freelance stories. After the caper was exposed, both Goldbergs offered to sever their ties to the wire service. Mrs. Goldberg's offer was accepted. Her husband's wasn't.

Comment:  Victor Lasky, who died on February 22, 1990, was more than a simple right-wing columnist. From 1956-1960 he was a public relations executive for Radio Liberty, which was one of the CIA's two largest propaganda operations at the time (the other was Radio Free Europe). Starting just two years later and continuing until 1980, the North American Newspaper Alliance distributed his syndicated column. It was revealed during Watergate testimony that Lasky was secretly paid $20,000 by Nixon's Committee to Re-elect the President while he was writing his column. CREEP included a number of CIA operatives. In the mid-1980s, Lasky was close to CIA director William Casey.

Lucianne and Sid's 28-year-old son Jonah Goldberg has been helping mom with her project. He is employed by Ben Wattenberg, a think-tank activist who was intimately involved with CIA-linked contra support activities during the 1980s. Wattenberg was also vice-chairman of the Board for International Broadcasting, which was created by Congress in 1973 in an attempt to remove Radio Free Europe and Radio Liberty from the taint of direct CIA control. His son Daniel Wattenberg, a conservative writer who has helped expose the Clintons, was a special assistant to convicted Iran-contra figure Elliott Abrams.

Richard Mellon Scaife, who funded numerous conservative groups in the 1980s, some of which evolved into anti-Clinton efforts over the past five years, was entangled with a major CIA propaganda effort based in London during the 1970s. It began as Forum World Features in the 1960s, which then spun off the Institute for the Study of Conflict in 1970. Both were funded jointly by Scaife and the CIA.  ...

None of which, it should be added, excuses Bill Clinton.

Sidney Blumenthal, fearless defender of the Clintons, co-edited a conspiracy book in 1976 titled Government by Gunplay. This book is hard to find today. It included chapters on the 1960s assassinations (JFK, RFK, MLK, the shooting of George Wallace), as well as one on unsolved Watergate breakins, and another on Nixon and organized crime (by Jeff Gerth before he joined the NYT). It's a classic of its day.

No fewer than four of the current advisory board members at Public Information Research contributed to this 1976 book: Robert Fink, Peter Dale Scott, Carl Oglesby, and L. Fletcher Prouty. Jeff Cohen, who at one time was a colleague of mine in Los Angeles, and is now the head of FAIR, a media organization in New York, contributed another chapter. Another friend of mine, Philip Agee, wrote the introduction.

Blumenthal Friday accused Starr of pursuing an imaginary plot of obstruction of justice involving him and other defenders of the president. "It's a lunatic plot being pursued by crazy prosecutors who think the White House is a mafia family," Blumenthal said. "They just don't understand democracy."

It would be more accurate if Blumenthal had complained that these crazy prosecutors understand the White House the same way that Blumenthal himself did 22 years ago. On the very day that Blumenthal made this statement, ABC News reported that Kathleen Willey has claimed that Nathan Landow encouraged her to change her story.

Landow, a real estate developer in the DC area with connections to organized crime, is a long-time Democratic fundraiser and contributor. More interestingly, he is the father-in-law of Clinton's lawyer Michael H. Cardozo, who is involved with all of the White House secrets -- from Vince Foster, to Webster Hubbell, to Charlie Trie. Three days before Foster's death, Hubbell met with Foster and Cardozo at Landow's estate in Easton, Maryland. That very morning, Hubbell had fired FBI director William Sessions. Foster reportedly was depressed after his visit.

Perhaps it's time for Kenneth Starr to bite the bullet.

Perjury and obstruction of justice over Bill Clinton's skirt-chasing is one thing, but Starr might think about using the Racketeer-Influenced and Corrupt Organizations (RICO) Act of 1970, which criminalizes patterns of illegal activity, and might theoretically allow him to sweep the White House with a broader broom.

The only problem is that when it comes to racketeering, no one holds a candle to Congress (unless it's Wall Street). Starr probably knows that he can't take on more enemies than he already has.

"They just don't understand democracy." On second thought, Blumenthal's statement might have been tongue-in-cheek. Is it possible that he still understands democracy the way he used to, and that he merely switched sides? He certainly is wearing some nice threads these days, and hanging out with a different class of people.

Guy says that Vincent Foster committed suicied; I don’t believe it. His killing would be part of a rightwing set-up, but wait, the Clintons really are rightwingers in drag. They cut the great society programs that worked so good for america, and put us back on the inadequate nonprofit donation crap.