CIA Documents: Since 1951 There has been a Pro-Fascist Network in the Ukraine - The Constantine Report
0 SHARES

Media » CIA Documents: Since 1951 There has been a Pro-Fascist Network in the Ukraine

(Translated from the German text)

The fascist phenomenon in the Ukraine has existed since the Orange Revolution. But these networks have been built and supported by the West for more than 50 years. The CIA has posted documents on its website that confirm it.

Fascists in the Ukraine are hardly mentioned by our media, or miscast as freedom fighters. On WikiLeaks one can read documents from the US embassy, ​​indicating that the United States looked on the local phenomenon with favor, while Russia has followed this development with concern. Finally, we have gained from videos and eyewitness accounts some insight into fascist activities in the Ukraine. To all appearances, these developments have been planned well in advance.

The American journalist Novak Zak, who writes for the Novorossia portal, has appearned in the CIA documents, which have now been made public. It ia clear that the secret CIA project AERODYNAMIC supported the anti-Soviet forces in Ukraine against Russia.

Then as now, the US is allied with these fascist and nationalist forces. Documents about the collaboration can be read on the CIA website and downloaded. Another CIA project was QR-Dynamic, which promoted the spread of right-wing propaganda in the Ukraine toward an anti-communist intellectual movement.

However, the project relates not only to the Ukraine. Also in the Baltic states, tthe CIA tried to strike an alliance with anti-communist forces. Today, the states of Estonia, Latvia and Lithuania are in the EU and NATO. SS veterans hold their parades in these countries. There, Soviet symbols like the hammer and sickle are  illegal, as they are in the Ukraine.

American collusion with Nazis has been practiced outside eastern Europe. Even in Germany, the US tapped former officers of the Waffen SS and Wehrmacht to defeat communism. One prominent example was the former major general of the Wehrmacht, Reinhard Gehlen. Under the Nazi regime, Gehlen was the head of the intelligence service Foreign Armies East. 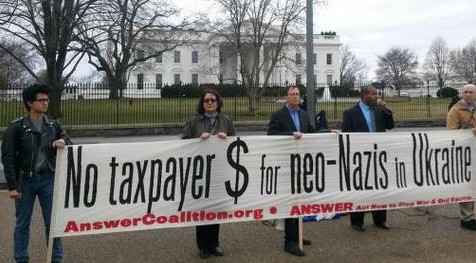 After the Second World War, he offered his services to the Americans, and became the first leader of the German Federal Intelligence Service (BND). In this capacity the "Faceless Man" coordinated inter alia the pro-fascist, stay-behind agents of NATO,  a co-project of the British secret service MI6 and the CIA. The best known, the Gladio project in Italy, is reported to have launched several false-flag terror attacks in the 1980s.

The article of the New Yorker journalist Novak is available on Novorossia Today in English. Numerous ambassadorial cables of US diplomats from the entire Soviet bloc are on this page - also in English.

The History of Wall Street’s Unspoken Relationship to Nazi Germany: Dragon Teeth to Be Planted All Over Europe Again