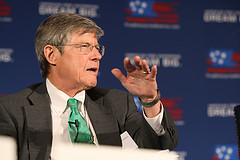 Mort Kondracke's Wikipedia biography perpetuates the myth: "... After college [1960], Kondracke joined the U.S. Army and served in Washington, D.C. in the Counter Intelligence Corps while pursuing graduate work at Georgetown University and working part time for the Washington Star. ... " - http://en.wikipedia.org/wiki/Mort_Kondracke

Beltway Boy Kondracke says that he served " in the Counter-Intelligence Corps."  Details of this "CIC assignment" would make interesting reading, I'm sure. Kokcracke says that he left the Army CIC in 1963 - the problem with this account: Counter-intelligence became a function of Army Intelligence two years before. CIC became DIA.

Wikipedia explains: "The Counter Intelligence Corps (CIC) was a World War II and early Cold War intelligence agency within the United States Army. Its role was taken over by the U.S. Army Intelligence Corps in 1961." At this time,  "the proliferation of intelligence agencies had meant needless duplication of effort and disputes over responsibility, so in 1961 the CIC ceased to exist as an independent organisation, as it and its Navy and Air Force equivalents were combined into the Defense Intelligence Agency."

Mort Kondracke was with the DIA, intelligence. This  is confirmed by a bio attached to his personal papers at Dartmouth, where he was an undergraduate:

No CIC claim here. Because it didn't actually exist independently - it was a DIA division.

Kondracke joined the CIC in 1960,  as it was folded into the DIA.  He knew this when he subsequently claimed a military assignment to the  CIC, not Intelligence, a  spin that makes him a Cold War hero and not a snitch.

He didn't protect his country. He spied on it.

And Kondracke was a DIA spook WHILE pursuing graduate work at Georgetown University AND working part time for the Washington Star. ...  juggled all of this without dropping a bowling pin, mind you - full military service, Ivy League grad school studies - and he still had two, three days in the week left over for a part-time writing job.

And what did he do exactly as an active intelligence agent in the District of Columbia?

Kondracke: " ... When I was in the Army Counterintelligence Corps (sic), there was a category of people called 'disaffected,' and we conducted security investigations on these people. ... "
http://newsbusters.org/blogs/brad-wilmouth/2009/11/17/olbermann-kristol-spitting-ft-hood-dead-hits-oreilly-calling-terroris#ixzz13yqkbVXf

Kondracke pursued graduate studies in Washington, D.C., admittedly spying on the "disaffected." (In the context of his statement, he was referring to American soldiers who exhibited signs of losing it and turning violent, like "fraggers" in Vietnam or Fort Hood's Nidal Hasan, but there is likely as much truth to this as there is to his claim that his mission was "counter-intelligence," because the DIA had a political mission in the early '60s - surveillance and disruption of the CIVIL RIGHTS movement.)

He signed a secrecy oath if he followed DIA dictate. It's not as though he could actially talk about his assignments on national cable.

But he acknowledges that he spied on "disaffected people," a vague but politically revealing phrase. Disaffected ... from ... ?

Questions: Who classified them as disaffected and assigned Kondracke to spy on them? Could disaffected include political opposition to US military or political or racial objectives at the time, perhaps on campus? Was his job at the Star cover for intelligence gathering in D.C.? As it happens, in the early '60s the DIA was a political spying unit, specifically targeting racial integrationists on campus (cf. pages 238- 39 of  Army Surveillance in America, 1775-198o, by Joan M. Jensen). This may explain what he was doing at Georgetown while assigned to the DIA - spying on the civil rights movement.

This is beginning to sound a bit more like right-wing propagandist Kondracke's bailiwick than the James Bond intrigues suggested by the  "Counter-Intelligence Corps" agent of Cold War fame.

"Almost all had serious reservations" about the transition. laments Doug Lamborne, Washington Times sports editor and former Star copy editor. "You'd have to be a brick not to go though some sort of moral convulsions. I lost five pounds the first week. We all had these twitchy sort of feelings: 'Is what we're doing right?' ... "

The Star's editorial policy had always been considered conservative. But there were limits ...

TV Propaganda Ties: The Washington Star also gave us right-wing propagandist James J. Kilpatrick of 60 Minutes fame. Fred Barnes, currently executive editor of the far-right Weekly Standard and a fixture on cable, covered the Supreme Court and the White House for the Star before moving to the Baltimore Sun in 1979. 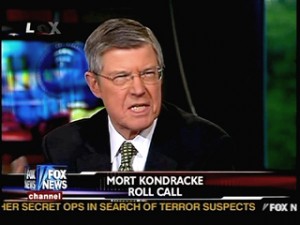 The Star's decline began in the 1950s because "the paper's general manager was perceived as anti-Semitic, which led to the loss of advertising revenue. ... " http://everything2.com/title/The+Washington+Star

The average racist, "conservative," pro-military corporate publisher would have no problem providing journalistic cover to a young DIA agent.... Lord knows how many of the "disaffected" Kondracke spied on as a "part-time reporter."

Years later, as I documented in a previous post:

In Iraq“thinkprogress.org — Fox News contributor Mort Kondracke writes today that if President Bush ’s escalation policy doesn’t work, his Plan B should be ‘winning dirty,’ which will likely involve ‘ethnic cleansing, atrocities against civilians and massive refugee flows.’ … ‘No one has publicly advocated this Plan B, and I know of only one Member of Congress who backs it — and he wants to stay anonymous. But he argues persuasively that it’s the best alternative available if Bush’s surge fails.’ … ”

“Kondracke says it’s understandable that Sunnis suffer because ‘so far they’ve refused to accept that they’re a minority. They will have to do so eventually, one way or another.’ … ”

Kondracke is also a Member of Freedom House, a CFR Front

“The abuse of Iraqi prisoners that is now coming to light was without a doubt despicable, abhorrent and illegal. But on the basis of known facts, these events do not justify the ouster of Defense Secretary Donald Rumsfeld or the political frenzy it has caused in Washington. … ”

Kondracke Denies that Waterboarding is Torture

“Watching Mort Kondracke defend Republicans and predict gloom and doom for Democrats tonight it was impossible to guess that he had the slightest connection with the Democratic Party. … Kondracke claimed that the ethics charges involving DeLay and Frist would turn out to be nothing. … Then he reminded viewers that the Republicans are in power and the Bush poll numbers have risen to a 45% approval. Adding that this is only 2005, he hinted that the Party would recover by 2008 and there was little chance that Democrats could gain control in 2006. Fred Barnes chuckled and congratulated Kondracke with ‘an excellent job on your homework.’ … ”

From The Nation: ” … On The Beltway Boys, Morton Kondracke likened Nevada Democrats to Communist propagandists. … ”

” … Fox’s Morton Kondracke (Beltway Boys, 6/24/07) warned of a slippery slope from single-payer care to a socialist dictatorship, saying that “Moore basically wants socialized everything and the movie neglects to tell you that Cuba is a dictatorship and an economic basket case.” (That “basket case” grew at a rate of 9.5 percent in 2006, according to the CIA World Factbook.) … ”

Noam Chomsky on Kondracke’s “enthusiasm for terrorist violence and illegal economic warfare”: “The March 15 [NY Times Book Review] carries Morton Kondracke’s review of Paul Hollander’s Anti-Americanism; the author and reviewer are loyal apologists for atrocities by the US government and its clients. Kondracke applauds this worthy exposure of the crime of anti-Americanism, though he feels Hollander may go too far in citing benefits for the handicapped as an illustration of the leftist deviation of Congress. …

“Kondracke agrees that ‘the left gets more respect and attention in the news media than its ideas merit,’ and is ‘strongly influential’ in colleges and the church. But all is not lost: ‘there is not a single Marxist or “anti-American” major daily newspaper (or even major newspaper columnist) in the country,’ and the dangerous ‘mainline churches’ are losing membership. Fortunately, those with ‘a generally critical disposition toward existing social arrangements’ are almost entirely barred, though we must keep up our guard in case the heresy finds a tiny outlet. … ”

“Kondracke is particularly outraged that even though ‘the Communist alternative has collapsed,’ the anti-Americans (by implication, pro Communists) maintain their ‘permanently adversarial culture’ and continue to ‘hate their nation.’ They ‘have not recanted,’ even though they have been proven ‘disastrously wrong’ in their wild claims that the Sandinistas and other evil-doers ‘represented a bright future for mankind’ – or, to replace raving by reality, that the Sandinistas might have offered hope for Nicaraguans. The criminals in this case include the World Bank, Central American Jesuits, the leading figure of Central American democracy, Jose Figueres, a great enthusiast for US corporations and the CIA, indeed, a rather broad range. But that just shows how awesome the anti-American conspiracy is. … ”

“During the ‘All-Star Panel” segment on the June 6 edition of Fox News Special Report with Brit Hume, Roll Call executive editor Morton Kondracke asserted that during the GOP presidential debates, Sen. John McCain ‘was the truth-teller about the war in Iraq.’ (sic) … ”

” … ‘Fox News’ Special Report with Brit Hume showed an edited video clip of Rev. Joseph Lowery’s remarks at Coretta Scott King’s funeral, during which he mentioned the failure to find weapons of mass destruction in Iraq. Lowery’s remarks were greeted with 23 seconds of applause and a standing ovation, but the clip Fox News aired presented nine seconds of applause and little hint of the standing ovation without noting that the clip had been doctored. After seeing the clip, Roll Call‘s Morton Kondracke concluded that the audience “wasn’t exactly uproarious in its response” to Lowery.’ … ”

•••
Punchline: Kondracke is Fox News’ Idea of a “Liberal”

” … So-called liberal contributors, who are at best centrists, include NPR’s Juan Williams and Mara Liasson and Roll Call’s Morton Kondracke. … ”

… but most of us view him as a conservative:

“John McLaughlin’s The McLaughlin Group, which went on the air in 1981, is sponsored by a private corporation, General Electric, with two liberal journalists facing off against … two conservatives such as Fred Barnes, Morton Kondracke or Pat Buchanon. … ” – Laurence Jarvic, PBS: Behind the Screen (Forum Books, 1997).