" ... A cache of 14,400 emails reveal how ex-police and intelligence officers within a secret NDS unit called Operational Security engaged hackers and encouraged piracy against competitors in an aggressive multimillion-dollar battle for the Australian market. ... The Australian Financial Review aligned the NDS scandal to Murdoch senior, saying it was 'particularly sensitive because Operational Security … operates in an area which historically has had close supervision by the office of the chairman, Rupert Murdoch.' ... "

BY MELISSA FYFE AND SHANE GREEN
The Ararat Advertiser, Mar, 29, 2012 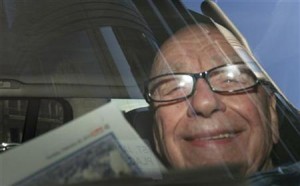 The fresh scandal engulfing Rupert Murdoch turns on something small and slim. This is not about tabloid-style phone hacking, but the smartcards pay television customers use to operate set-top boxes. Sounds mundane but, it turns out, the pay TV world is much murkier than one would suspect.

By 1999, Australia had a big problem with pay TV smartcard piracy. An underground market of 50,000 dodgy cards - sold over the internet, from car boots and in flea markets - was flourishing, and hackers found a lucrative trade in breaking the smartcard encryption codes so customers could get free pay TV. For the television companies and the then Murdoch-owned NDS, a global maker of smartcards, this was devastating for business.

Yesterday's revelations in The Australian Financial Review lifted the veil on how NDS protected its own technology in Australia, while attacking the technology of its rivals - actions it insists were not illegal. A cache of 14,400 emails reveal how ex-police and intelligence officers within a secret NDS unit called Operational Security engaged hackers and encouraged piracy against competitors in an aggressive multimillion-dollar battle for the Australian market.

The Australian Financial Review's  investigation is an explosive local version of allegations well-aired elsewhere, particularly through courts across the globe, as competitors accused NDS - unsuccessfully - of ruining their businesses by promoting hacking. Concerns over NDS' operations were raised by The Guardian in 2002 and most recently by the BBC program Panorama.

Panorama revealed that NDS funded a hacker website, The House of Ill-Compute, that encouraged the hacking and publishing of smartcard codes. Hacker Lee Gibling ran the site and told the BBC that NDS wanted people to freely update the hacked cards of News Corp's BSkyB rival ONdigital, ''flogging it until it broke''.  In 2002, OnDigital did break, although insiders say piracy was just one reason it went bust.

Less clear is how commercially damaging NDS' alleged behaviour was in Australia. The Financial Review puts the cost of piracy at $50 million a year to pay TV companies and points out that Foxtel's rival and eventual takeover target Austar wrote off $600 milllion in losses in 2003. Yesterday, News Limited, which partly owns Foxtel, said the notion that NDS would undermine Austar so that Foxtel could bid for it 13 years later were  ''so far-fetched as to be laughable''.

Why does the story matter? First, two commercial deals may be affected. The competition watchdog is yet to approve Foxtel's $1.9 billion takeover of Austar. And some commentators are questioning whether News Corp can hold on to its massive profit from the $US5 billion ($A4.75 billion) sale of NDS, announced two weeks ago.

For the Murdochs, the controversy follows the damaging phone hacking scandal. James will find it difficult to escape the Pay TV controversy as he is currently a director of NDS, as was Lachlan between 2002 and 2005. Panorama said there was no evidence James Murdoch knew of the events it reported.

UK communications regulator Ofcom is examining whether James Murdoch and News Corporation are ''fit and proper'' people to be in control of BSkyB, the company that runs Sky TV. News Corporation owns 39 per cent of BSkyB.

The Australian Financial Review aligned the NDS scandal to Murdoch senior, saying it was ''particularly sensitive because Operational Security … operates in an area which historically has had close supervision by the office of the chairman, Rupert Murdoch''.

A key person in the pay TV scandal was Avigail Gutman, the Asia-Pacific head for Operational Security.  In the emails obtained by The Financial Review, Ms Gutman wrote in 1999 that they needed to eliminate alleged hacker David Cottle as a threat to NDS ''without disturbing his other hacking activities … We do not want Cottle in jail until he has a successor for the [rival] Irdeto hack.''

DAVID COTTLE Alleged Sydney-based hacker who, according to The Australian Financial Review's cache of emails, appears to have been used by Gutman to hack NDS' rival technology Irdeto.