A marketing campaign was undertaken to isolate German Jews from the community. Children were targeted for media saturation of anti-Jewish propaganda. 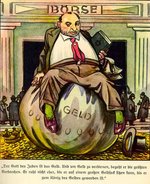 “If international finance Jewry within Europe and abroad should succeed once more in plunging the peoples into a world war,” warned Hitler in a speech to the Reichtag on January 30, 1939, “then the consequences will not be the Bolshevization of the world and therewith a victory of Jewry, but…the destruction of the Jewish race in Europe.”

The campaign against the Jews began in earnest with the establishment of Goebbels’ Ministry of Public Enlightenment and Propaganda in 1933. Each and every segment of the German population was exposed to anti-Jewish propaganda from that point onward. School children–the most impressionable segment of German society–were bombarded with anti-Semitic mass media in school and at home.

According to Frank Chalk in his paper, “Radio Propaganda and Genocide,” mass media served three distinct functions in genocide: “demonizing the intended victims; undermining support for the victims among members of the dominant group; and encouraging mass participation and acquiescence in the genocide.”

Targeting school children with the “message” about the Jews 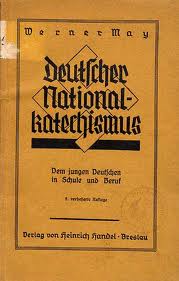 Published in 1934, a Nazi pamphlet called The German National Catechism was used to instruct young German children on the 25 points of the Nazi party. It is the section on race that discusses the Jews. The pamphlet asks, what race must the Nazi “race” battle? We are told the Jewish “race.”

Later the Catechism asks how the Jew has “subjugated the peoples?” We are told that it is with money. “He lent them money and made them pay interest. Thousands and thousands of Germans have been made wretched by the Jews and been reduced to poverty.” The book asks “What is racial defilement?” It is explained that it is a “careless disregard of our nature and a contempt for our blood. No German…may marry a Jew.” The book tells the children that Germans who marry Jews are no longer part of the Volksgemeinschaft (people’s community).

Jews: the “poisonous mushrooms of mankind”

Julius Streicher, the publisher of the anti-Semitic newspaper, Der Stuermer, ran the publishing house that released Der Giftpilz (The Poisonous Mushroom). Deep in the German forest, a young boy and his mother are picking mushrooms. After finding some poisonous ones, his mother says that there are both good and bad mushrooms. She says that they have to be on their guard against bad people–just like they must watch out for poisonous mushrooms. “And do you know who these bad men are, these poisonous mushrooms of mankind?”

Beaming with pride, he declares, “Of course I know, mother! They are the Jews! Our teacher has often told us about them.” The mother says that just one bad mushroom can kill a family, “so a solitary Jew can destroy a whole village, a whole city, even an entire Volk.” The mother goes on to tell her son that millions of non-Jews don’t know the truth about the Jews, that they need to be “enlightened”–especially the young people. Just as these poisonous mushrooms usually lead to something terrible, continues the mother, the same is true of the Jew. 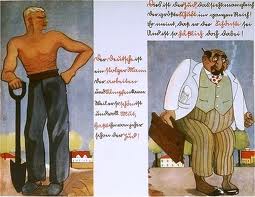 A teacher’s guide, Heredity and Racial Science for Elementary and Secondary Schools, was used to prepare teachers for grades 4 through 8 students in “racial” science classes. A large section of this publication is devoted to Jews and the German people. The guide prepares the teachers by telling them, “The genetic, physical, and spiritual characteristics of the Jew are so foreign and different to us that any association with a Jew must be rejected…[especially] by the smallest, simplest child.”

A recurring theme is that the Jew does not belonging to the “community” of Germans. “As soon as the Jew was recognized as a bloodsucker and parasite among the people,” says the teacher’s guide, “he was expelled from the people’s community.”

Examples are given of Jews in the Middle Ages living in ghettos and wearing pointed hats. Jews are blamed for having complete power over Germany’s economic life after the November revolution of 1918. They are also blamed for poisoning German cultural life with their “filthy” dramas and “dirty” movies, especially children. Jews have lost their citizenship in Nazi Germany, which draws a line between Germans and Jews.

Previous Article
Coalition Sues California Over Approval of Cancer-Causing Strawberry Pesticide .
Next Article
Re – The Biggest Political Scandal of the Past Decade: CIA Delayed Breakup of Khan Network for Decades