Six British passport holders dressed in tennis clothes and wearing false beards and wigs were involved in the assassination of a senior Hamas commander in Dubai, police in the Gulf state have claimed.

By Adrian Blomfield, in Jerusalem and Andrew Hough 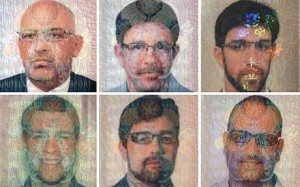 Officers said the group, who may have used either stolen or forged documents, were allegedly part of an 11-man hit squad that murdered Mahmoud al-Mabhouh.

Mr Mabhouh, a senior figure in the military wing of Hamas, was found dead in a hotel room on Jan 20. According to one report he was killed by a female assassin who entered his room by posing as a member of hotel staff, injected him with a drug that induced a heart attack and hung a “Do Not Disturb” sign on the door.

But other officers said he was strangled, probably after receiving an electric shock.

But video footage and a series of passport photographs released by the Dubai police last night suggested a much more convoluted and bizarre operation than is normally associated with Mossad, which has a reputation for ruthless professionalism.

Most of the individuals appeared to be of Middle Eastern origin, even though they carried passports with European-sounding names.

Six of the suspects carried British passports, three others had Irish passports, while the other two had French and German documents.

The woman had Irish papers and was named as Gail Folliard. The other Irish were named as Kevin Daveron and Evan Dennings.

British government sources told The Daily Telegraph there was no "corroboration" within Whitehall of any British involvement in the assassination plot.

Government sources also said that officials do not believe any Irish nationals were involved but were Mossad agents using Irish passports.

Gen Tamim also released CCTV footage that showed the woman wearing a wig and sporting a large hat and sunglasses in an apparent attempt to blend in with tourists.

Other suspects were wearing tennis clothes and false beards and carried tennis rackets. They were shown entering and exiting the al-Bustan Rotana hotel, where the victim stayed. Four of the group are then shown using an electronic device to open the door of a hotel room.

Despite appearances to the contrary, Gen Tamim said the operation was highly professional. None of the suspects was in Dubai for more than 19 hours, while Mr Mabhouh was killed just five hours after he arrived in the Gulf state.

Beyond saying it was possible that '“leaders of certain countries gave orders to their intelligence agents”, Gen Tamim made no direct accusation against Israel, which has declined to comment.

He said: “We do not rule out Mossad, but when we arrest those suspects we will know who the mastermind is.”

Although he hinted that the suspects may have used stolen passports, the police chief called on Britain to co-operate with the investigation.

A Foreign Office spokesman said officials were “seeking further information” and were aware a request had been made to Interpol for arrest warrants.

Asked if any of the names had been registered with British officials or if any had reported passports being stolen, a spokeswoman for the Home Office declined to comment.

A spokesman for the Irish Department of Foreign Affairs said: “The Irish embassy in Abu Dhabi is in constant touch with the emirate on a daily basis, but have received no official confirmation on any Irish nationals being involved.”

Scotland Yard sources also had no knowledge of any British involvement in the plot.