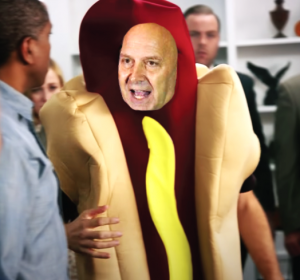 If Democrats needed another reason to focus on the Pennsylvania governor’s race this year, they just got it. Last week, the US Supreme Court reversed Roe v. Wade, the landmark case recognizing abortion rights under the US Constitution. As a result, individual states will now decide whether and when a woman can seek an abortion. In Pennsylvania, the Republican candidate for governor, state Sen. Doug Mastriano (a retired colonel), has vowed to ban abortion outright.

No exceptions. Not even the life of the mother.

But there is another reason to fear Mastriano’s potential ascent to the governorship if he should defeat Democrat Josh Shapiro in November. Mastriano, who spread one of the most blatant lies about the 2020 election, would get to choose the state’s top election official, the secretary of state, if elected in November. This has enormous implications for the 2024 presidential election because Pennsylvania carries a whopping 19 electoral votes. (It had 20 in 2020, but lost one in the census.) The only swing state with more electoral votes is Florida.

Beyond the issues of abortion, public education, and party affiliation, the prospect of Mastriano as governor should alarm everyone who cares about election integrity. Mastriano, a close ally of former President Trump, posted a tweet on November 27, 2020, that swapped primary and general election data, creating the false impression that more mail ballots had been counted than were sent out in Pennsylvania.

“That was one of the big ones,” Barr has said of this false claim, explaining that Mastriano had taken “the number of applications for the Republican primary and … compared it to the number of absentee votes cast in the general election,” but if you looked at the numbers “apples to apples there’s no discrepancy.”

And yet, as noted by Twitter researcher Pamela Edwards, Mastriano has never deleted or apologized for the tweet.

As of this week, Mastriano’s tweet remains online and active. It has been retweeted more than 30,000 times.

On November 25, 2020, (two days before Mastriano posted the bogus tweet), Mastriano had presided over a supposed “election integrity” event with two members of Trump’s Pennsylvania legal team, Rudy Giuliani and Jenna Ellis. Mike Flynn, a retired general and convicted perjurer, had dispatched his close associate, Phil Waldron, a retired colonel and psychological warfare specialist, to bestow his military gravitas upon the event. Trump, who phoned into the hearing to declare without proof that the election was “rigged,” pardoned Flynn that day.

The event was misleadingly promoted as a “hearing,” even though it was held in a hotel ballroom where the rules of evidence and the threat of perjury obviously did not apply. Adding to the false impression of legitimacy, this non-hearing was conducted in the historic town of Gettysburg, PA, which is surrounded by Mastriano’s district. Witnesses were not “sworn in” before “testifying.” There were no affidavits. Just claims.

During the event, Giuliani made the same false mail-ballot claim later circulated by Mastriano. Lancaster Online, for instance, has carefully debunked this and other falsehoods and distortions from the event.

“Honestly, the Trump legal team was not exactly stellar at PA’s hearing,” Diamond wrote. “[They] failed to provide the affidavits of their witnesses and made a glaring error by purporting that more ballots had been returned than mailed out.”

Tellingly, in his subsequent Pennsylvania court filing, Giuliani omitted the falsehoods from the fake hearing, conceding that “this is not a fraud case.” Subsequent disciplinary proceedings against Giuliani, whose law license has been suspended in New York and DC, cited the false mail-ballot claim. In response, Giuliani “did not deny” that the claim was false, as observed by journalist Kurt Eichenwald.

Like Giuliani, Mastriano was a key ally in Trump’s effort to steal Pennsylvania’s electoral votes. In addition to organizing the fake hearing, he met with Trump in the White House on November 25, 2020, (immediately after the fake hearing), tried to persuade Pennsylvania lawmakers to submit their own slate of electors (under Pennsylvania law, only the secretary of state can do this), declared publicly on November 27 (the day he sent his bogus tweet) that Joe Biden had won Pennsylvania only because Democrats “cheated,” and submitted a resolution to state lawmakers on that same day to vacate the certification of Biden’s victory. The Philadelphia Inquirer has an excellent timeline of these and Mastriano’s other actions to try to steal the election from Biden.

The lies spread by Mastriano and Giuliani did not fall on deaf ears. Rachel Powell, a Pennsylvania mother, was filmed storming the Capitol on January 6 using a makeshift crowbar to smash windows and a bull horn to bark instructions at other rioters. Powell later told journalist Ronan Farrow (writing for The New Yorker) that she had been influenced by Giuliani’s remarks during Mastriano’s fake hearing.

Curiously, in 2020, both Mastriano and Powell had attended a 4th of July occupation of Gettysburg by various militias and other right-wing extremists, as reported by The Daily Beast. Mastriano is wearing maroon in the photo below. I do not know if the men next to him are “boogaloo,” but the Confederate flag stands out.

The catalyst (or pretext) for the occupation was a false claim that anti-fascists (“antifa”) were plotting to desecrate the battlefield and burn the American Flag, as reported by The Washington Post. The false claim had been spread by The Gateway Pundit in an article written by Jacob Engels, a close associate of the pro-Trump gang called the Proud Boys. Engels is a protégé of Roger Stone, a convicted perjurer whose sentence would be commuted by Trump on July 10. Stone, who had courted the Proud Boys for years, would soon become a key architect of the 2020 “Stop the Steal” campaign, per his co-architect Ali Alexander. Stone had previously coined the phrase “Stop the Steal” in 2016 and taken credit for orchestrating an election riot (known as the “Brooks Brothers riot”) in 2000.

Since 2016, Stone had also extensively mentored Jack Posobiec, a far-right operative with Pennsylvania roots who had worked closely with the Oath Keepers and amplified a similar hoax about “antifa” invading Gettysburg in 2017. In 2018, Mastriano tweeted at Posobiec, seeking his endorsement. After Trump lost the 2020 election, Posobiec promoted Mastriano’s bogus November hearing to his massive Twitter audience, which currently exceeds 1.8 million followers.

Sam Lazar of Lancaster, PA, attended this sham hearing in person. On January 6, Lazar allegedly threw bicycle racks, tore down barricades, and maced police. At one point, he shouted, “Hang the motherf#ckers!,” as reported in The New Yorker. Before he was identified, he was known on Twitter as #facepaintblowhard.

After the Proud Boys breached a barricade outside the Capitol, Lazar was caught on video running alongside Zach Rehl, the president of the Philadelphia Proud Boys chapter, as discovered by Twitter researcher @R5Philly. Rehl has since been indicted for seditious conspiracy, along with four other Proud Boys leaders.

At some point on January 6, Mastriano and his wife walked through a breached barricade on the east side of the Capitol.

Mastriano has implied that he doesn’t know Lazar, despite many photos of them together and a video of Lazar and his family strolling next to Mastriano during what appears to be the “Million MAGA March” in DC on December 12, 2020.

On May 15, 2021, Lazar attended a Mastriano fundraiser hosted by Giuliani. There, Lazar was photographed with Mastriano and Teddy Daniels, who was endorsed by Mastriano in the Pennsylvania lieutenant governor’s race, but lost in the primary. Daniels is a brute who challenged local journalist Chris Kelley to a face-to-face confrontation last October.

After HuffPost exposed Lazar’s presence at the fundraiser, Mastriano told the publication that he condemned Lazar’s actions. Lazar was arrested on Capitol riot charges in July 2021.

Like Lazar, Pennsylvanian Sandy Weyer attended multiple Mastriano events before the insurrection. She also appears in the video mentioned above with Lazar and Mastriano. During the insurrection, Weyer allegedly filmed a violent attack on a female New York Times photographer and encouraged more violence against the photographer by yelling, “get her out, mace her!”

As for Mastriano, his assault on election integrity has also extended to the state’s voting equipment. In December 2020 and February 2021, he reportedly facilitated an unauthorized and secretive review of voting system data in Fulton County, PA, a county that Trump had won by a large margin. Upon learning of the review, the state decertified the equipment due to concerns about the broken chain of custody and potential tampering.

More recently, on March 19, 2022, Mastriano held a so-called “election integrity” conference — again in Gettysburg — featuring a special appearance by Steve Bannon, a convicted fraudster pardoned by Trump who once said that the way to handle the media is to “flood the zone with shit.”

In March 2022, Mastriano also endorsed Dasha Pruett, a MAGA candidate who ran for Congress in Pennsylvania’s First District. The Bucks County Beacon and Levittown Now  reported in April that Pruett’s campaign had submitted forged signatures on a petition to qualify Pruett for the ballot. The forgeries had come to light after a registered Republican had filed an objection to the petition on March 22. Pruett withdrew from the race as soon as the objection was filed. Mastriano has said nothing about the scandal.

Nor has he publicly identified his pick for secretary of state, although there is reason to worry that it may be Ivan Raiklin, a retired colonel and lawyer who promoted the discredited theory that Pence had authority to reject Biden electors (the so-called “Pence card”). As reported by columnist Will Bunch, Raiklin filmed a “Primary Night video with Mastriano in which he claimed the candidate’s success would mean ‘20 electoral votes!’” Before the insurrection, Raiklin also was included on a membership list for a “Friends of [Roger] Stone” group chat, along with Ali Alexander, Jacob Engels, Oath Keepers leader Stewart Rhodes, and former Proud Boys leader Enrique Tarrio. Rhodes and Tarrio have since been indicted for seditious conspiracy relating to January 6.

Adding insult to injury, Mastriano has hired attorney Jenna Ellis, Giuliani’s sidekick from the “not-so-stellar” sham hearing in Gettysburg, as a senior legal advisor. Chief counsel for the Republican National Committee has called Ellis’s fraud claims about the 2020 election “a joke.” Like Giuliani, a disciplinary complaint has been filed against her. Ironically, before joining Trump’s legal team, Ellis herself had called out Trump and his supporters for constantly lying.

On May 31, 2021, in a since-deleted tweet, Giuliani posted a meme of himself, Mastriano, and Ellis with a large Confederate flag in the background, Mastriano’s name misspelled, and the caption: “Witness History. Gettysburg.” The meme riffs an actual promotion from the Hollywood movie Gettysburg. 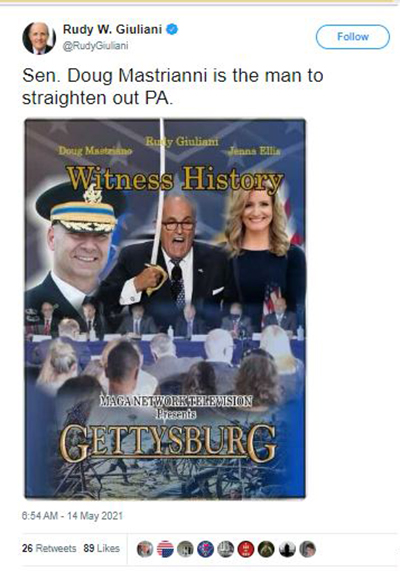 It was, of course, the battle of Gettysburg that turned the tide of the Civil War against the Confederate Army in 1863. The Confederates had claimed that states should possess the right to enslave people, just as Mastriano now claims that states should have the right to deny abortion access (even to save the mother’s life), ban LGBTQ+ rights, and reject results of a presidential election.

Gettysburg has long symbolized the quest for equality and freedom in America. But if Mastriano wins the Pennsylvania governorship, it may instead come to symbolize the country’s demise.