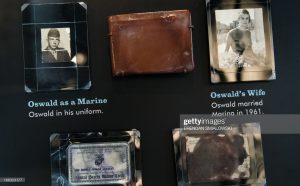 Lee Harvey Oswald missed his calling. Obviously. There he was bouncing around the planet from one self-incriminating situation to another, when destiny might have led him to certain fame as a Las Vegas stage magician. He was capable of appearing in two places at the same time, mentally altering huis appearance at will, casting shadows at impossible angles, teleporting across town to evade police, firing off shots that zig-zag in mid-air -- and then there are the baffling wallet tricks.

Jack White, whose collection of John Kennedy assassination photos is archived at the University of Texas Arlington, had the billfold mystery called to his attention by Jim Marrs, author of Rule by Secrecy and Crossfire: The Plot that Killed Kennedy. In the course of a phone call, Marrs told him to compare page 15 of the Warren Report with page 181.

White: "Quoting from page 15, 'On the dresser in their [the Oswalds] room he left his wedding ring which he had never done before. His wallet containing $170 was left intact in a dresser-drawer.'"

"What's the deal? Did he leave his wallet at home with $170 in it, or did he leave it at the Texas Theater with $14 in it plus Hidell documents? Did he have two wallets? Or did a police officer produce the billfold with the forged documents after bringing Oswald in? Sgt. Gerald Hill, who claimed to have discovered the billfold on Oswald in the police car enroute to downtown, and officers Rose, Adamcik and Stovall, who found the Oswald wallet at the Paine house, had to get together and decide which is the real story."

The staff at WFAA-8, a Dallas TV station, have also scratched their heads over Oswald's skills as an illusionist.

"Oswald's wallet has been a persistent mystery in recent years," they note in a collective web posting.  "The mysterious billfold first appeared on WFAA in the afternoon of November 22, 1963.WFAA program director Jay Watson, anchoring live coverage of the assassination, asked Channel 8 photographer Ron Reiland to join him on set and discuss film that Reiland just shot on the Oak Cliff street where Tippit was slain."

On air, Watson said, "Let's roll the film and we'll narrate as we go."

'Let's roll the film and we'll narrate it as we go,' Watson said on air.

Reiland improvised a narration, described the murder scenen. He speculated that the wallet caught on film belonged to Tippit,

But "'there is absolutely no doubt in my mind that this is Oswald's wallet,'" opined Farris Rookstool III, a JFK historian and former FBI analyst, in a Channel 8 interview.

"So, Rookstool set out to prove it.

"He compared the Channel 8 black-and-white film to Oswald's actual wallet in the National Archives. On each of them, circular snaps are visible, along with metal strips and perhaps the biggest similarity zipper over the cash compartment.

"Oswald's wallet is a different color and has different characteristics than Tippit's.

"This month, for the first time, Marie Tippit shared her late husband's wallet with WFAA. Tippit's is black, has a different style snap no metal bar like Oswald's and does not have a zipper over the cash compartment.

"A half hour east of Birmingham, Alabama is the only man alive today who saw Oswald's wallet at Tippit's murder scene.

"'As I walked up, I happened to not knowingly step in a puddle of blood, which was Tippit's blood,' retired FBI Special Agent Bob Barrett recalled. 'I thought, 'Oh God, what have I done?'

"He spent 27 years in the FBI and was asked to go to the Tippit murder scene that day by his friend, Dallas County Sheriff Bill Decker.

"After arriving at 10th and Patton in North Oak Cliff, Barrett said, he recognized a Dallas police captain thumbing through a billfold.

"'He said, 'Bob, you know all the crooks in town, all the hoodlums, etc. You ever heard of a Lee Harvey Oswald?' I said, 'No, I never have.' He said 'How about an Alec Hiddell?' I said, 'No. I never have heard of him either,'' Barrett explained. 'Why would they be asking me questions about Oswald and Hiddell if it wasn't in that wallet?'

"In addition, the first Dallas cop on the Tippit crime scene said he actually recovered the wallet.

"Sgt. Kenneth Croy, a reserve officer at the time, put it in writing on an 8' x 10' picture for Rookstool.

"'First on the scene, recovered Oswald's wallet there, too,' Croy wrote on an image of Tippit's patrol car."

So Oswald's wallet was found at the Paine residence, but also in the police car following Oswald's arrest, and at the scene of Officer Tippit's murder. Most men only own one wallet at a time, and it manages to stay in one place, not three simultaneously. But Oswald was no ordinary mortal patsy.

"But officially, Dallas police told a different story. The department said it got Oswald's wallet from Oswald himself after his arrest a short time later at the Texas Theatre.

Barrett and Rookstool believe police made that up for the official report because too many officers handled the crucial piece of evidence at the shooting scene.

'They said they took the wallet out of his pocket in the car? That's so much hogwash,' Barrett said. 'That wallet was in [Captain] Westbrook's hand.'

"'Bob's in Alabama. Kenneth Croy is in Hamilton, Texas,' Rookstool said. 'They had no relationship with each other than the fate of history put them at the scene of a crime.'

"Rookstool says the testimony of Barrett and Croy, Tippit's billfold, and the WFAA film prove that Oswald's wallet was at the scene of the policeman's murder."

The WFAA staff concludes that the wallet was "the first hard evidence placing Oswald there on that day."

This is a bit of an overreach. It only proves that a wallet was very conveniently dropped at the murder scene by someone for police to recover, that's all. Presidential assassins don't ordinarily leave an ID behind when bumping off cops explicitly to cover their tracks. The execution of Kennedy took meticulous planning, but Oswald went on the lam with chump change in his pocket?

"Too many officers handled the crucial piece of evidence," Rookstool said. So, he acknowledges with a shrug, they lied -- about "crucial evidence" related to the murder of a fellow officer, because their fingerprints were all over it? That is damning, but their motive for lying is too important to be left to the idle speculation of a former FBI analyst. The police might also lie about the wallet if it was dropped at the murder scene to frame Oswald and tie him to an alias. Either way, they have been caught in a cover story concerning one of the most consequential murder cases in the last century. Oswald may have been a magician, but he didn't control minds. The police conspired to deceive the Warren Commission. Why they did it remains to be determined concretely.

(Thanks to John Bevilaqua for sending the White anecdote.)