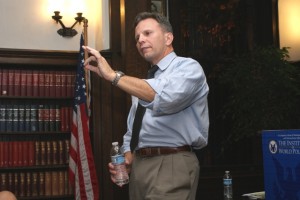 On Thursday evening, May 12, join Lt. Col. Tony Shaffer at the International Spy Museum as he discusses his book “Operation Dark Heart” and the controversy it stirred up. Shaffer was a Defense Intelligence Agency senior intelligence officer who returned to active duty after the 9/11 attacks in 2001. During that 30 month period, Shaffer commanded a DIA operating base and conducted two successful undercover combat tours in Afghanistan. The objective of those tours? Searching for senior al-Qaeda leadership figures by recruiting informants and gathering intel.

His appearance at ISM so shortly after the events on May 1 is purely coincidental but timely.

Shaffer wrote about his experiences in Afghanistan in his book Operation Dark Heart. The book was submitted to the US Army in 2003 for review and approval, with 100 advanced copies going out after the modestly censored version was returned.

After the first printing had gone out, both the DIA and NSA viewed the book and insisted on censoring further passages. The initial 10,000 print run was bought and destroyed by the Pentagon, with the second printing, now heavily censored, hitting the shelves in September 2010. With so many advanced copies already out there, the censored material was “known” and attracted more attention as to why it was suddenly flagged for removal.

As a result, the book has received quite a bit of attention, being the focus of Wikileaks, the New York Times, and other media.

Lt. Col. Shaffer will discuss his personal experiences in Afghanistan, share his thoughts about the current situation, and provide commentary on the controversy surrounding his book.

The program begins at 6:30 p.m. Tickets, $15 per person, may be purchased through the International Spy Museum’s box office (202-393-7798) or website. The ISM is located at 800 F Street, NW, near the Gallery Place/Chinatown Metro Stop on the Yellow, Green, and Red lines.