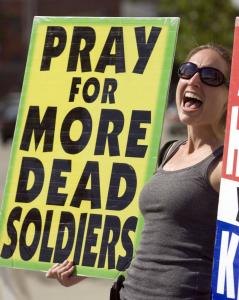 (CNN) -- The father of a Marine whose funeral was picketed by the Westboro Baptist Church says an order to pay the protesters' legal costs in a civil claim is nothing less than a "slap in the face."

"By the court making this decision, they're not only telling me that they're taking their side, but I have to pay them money to do this to more soldiers and their families," said Albert Snyder, whose son, Lance Cpl. Matthew Snyder, was killed in action in Iraq in 2006.

Members of the fundamentalist church based in Topeka, Kansas, appeared outside Snyder's funeral in 2006 in Westminster, Maryland, carrying signs reading "You're going to hell," "God hates you" and "Thank God for dead soldiers."

Among the teachings of the church, which was founded in 1955 by pastor Fred Phelps, is the belief that God is punishing the United States for "the sin of homosexuality" through events such as soldiers' deaths. 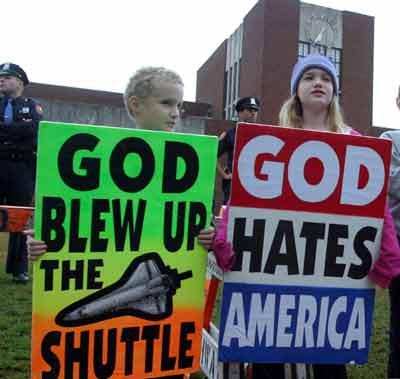 "Mr. Snyder and his attorneys have engaged the legal system; there are some rules to that legal engagement," said Phelps, a member of Westboro who says she has participated in more than 150 protests of military funerals.

"They wanted to shut down the picketing so now they're going to finance it," she said.

The 4th Circuit Court of Appeals on Friday ordered that Snyder pay more than $16,000 in costs requested by Westboro for copies of motions, briefs and appendices, according to court documents.

In a motion filed in October, Snyder's lawyer, who is representing him for free, asked the court to dismiss the bill of costs, or, alternatively, reduce the 50-cent fee per page or charge Snyder only for copies that were necessary to make their arguments on appeal.

"We objected based upon ability to pay and the fairness of the situation," Sean Summers said.

The mostly pro-forma ruling is the latest chapter in an ongoing legal saga that pits privacy rights of grieving families against the free speech rights of demonstrators, however disturbing and provocative their message.

Snyder's family sued the church and went to trial in 2007 alleging privacy invasion, intentional infliction of emotional distress and civil conspiracy. A jury awarded the family $2.9 million in compensatory damages plus $8 million in punitive damages, which were reduced to $5 million.

Westboro in 2008 appealed the case to the 4th District, which reversed the judgments a year later, siding with the church's claims that its First Amendment rights had been violated.

"The protest was confined to a public area under supervision and regulation of local law enforcement and did not disrupt the church service," the circuit court opinion said. "Although reasonable people may disagree about the appropriateness of the Phelps' protest, this conduct simply does not satisfy the heavy burden required for the tort of intentional infliction of emotional distress under Maryland law."

The U.S. Supreme Court has agreed to hear the case to address issues of laws designed to protect the "sanctity and dignity of memorial and funeral services" as well as the privacy of family and friends of the deceased.

The justices will be asked to address how far states and private entities such as cemeteries and churches can go to justify picket-free zones and the use of "floating buffers" to silence or restrict speech or movements of demonstrators exercising their constitutional rights in a funeral setting.

Both Phelps and Snyder's attorney said they were surprised that the 4th District chose to weigh in on the issue of legal costs when they could have waited until after the Supreme Court hearing.

Phelps believes the ruling bodes well for her side.

"It is a good harbinger of the fact that the Supreme Court will remind this nation that you don't have mob rule. The fact that so many people hate these words does not mean you can silence or penalize them. That's supposed to be the great liberty that we congratulate ourselves on protecting in this nation. We strut all around the world forcing people to give all the liberties we supposedly have," she said.

Phelps anticipated that a Supreme Court ruling in the church's favor would be unpopular, but she said Westboro's members viewed the potential outcome in Biblical terms.

"When the Supreme Court unanimously upholds the 4th Circuit, it's going to put this country in a rage, and we will be expelled," she said. "But whenever it was time for an epic event in the Bible, the thing that happened right before is the prophets were removed from the land, and that's what's going to happen to us. ... We're going to sprint to the end of this race."

Snyder claims he is unable to pay any legal costs in the case and is attempting to raise funds on his son's site, http://www.matthewsnyder.org/. He is equally optimistic that he will prevail before the Supreme Court.

"The American people keep my spirits lifted a lot and give me hope. I think most of the country is on my side on this issue," he said. "Too many people have died to protect our rights and freedoms to have them degraded and spit upon like this church does."

these ppl and this church give me mixed feelings. i want to go up to them, punch all of them out, burn there homes, tie them up and leave them in the woods for the animals. they go and protest at memorials for fallen marines/sailors/soldiers/airman. the same ppl who fight, and die for there right to even say the things they say!!! the disrespect is just.. wow. i have seen marines die in combat.. right in front of me. and God has nothing to do with that. now i am straight, i love woman. but if guys are gay, so what? that means more woman for us straight guys. and woman are gay? well it is awsome to watch. who agrees with me? these ppl should know how it feels. when someone dies of them. ima go and make a sign that says thank god for dead crazy mental fu*ks! you see it is ppl like this and this church, that make the world hate the USA. and also make ppl look down on christians

What is the FBI doing about shutting down this hate group?