The Essential Mae Brussell: Investigations of Fascism in America

Mae Brussell has been called “the intellectual forbear of the study of parapolitics” by conspiracy writer Kenn Thomas and “the Queen of Conspiracy” by others. This book of articles, interviews and radio transcripts from Brussell’s prolific career, however, shows a complex, compassionate woman whose work challenges and compels.

Mae Brussell was born May 29, 1922, in Beverly Hills, her father Rabbi Edgar Magnin of the Wilshire Boulevard Temple, the man who blessed President Richard Nixon at the White House. Magnin’s close connections to Hollywood earned him a nickname: Rabbi of the Stars. Brussell grew up in an affluent, mostly conservative family. She married and had five children. In a 1974 interview with Playgirl, she described years of studying the world through a traditional lens:

I went to Stanford University and got married a few weeks before graduation. I majored in philosophy. We studied Plato, Nietzsche, Emerson, and Thoreau – yet the professors didn’t seem to understand anything about real life. Those were the war years, 1940 to 1943. Hitler was raising a holocaust all over Europe – but we were upper middle-class children, so we studied medieval history … It was as if the world outside didn’t exist.

The age of innocence for Brussell ended with rifle shots in Dallas and the assassination of President John F. Kennedy on November 22, 1963. In the wake of that event, Brussell purchased all 26 volumes of the Warren Commission Reportand painstakingly cross-referenced every detail in the report, a task that took eight tedious years and resulted in 27,000 pages of textual analysis. She found an abundance of contradictions, omissions and distortions, casting doubt on the validity of the official investigation into Kennedy’s death. She used this work, she says, as her “Rosetta Stone.”

“It unlocked every other conspiracy,” Brussell told the San Francisco Chronicle in 1981.

Brussell channeled her revelations on the radio broadcast Dialogue: Conspiracy 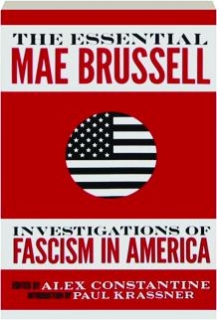 (later called World Watchers International) on KLRB, an FM station in Carmel, California. In 1983, she moved her hour-long program to KAZU-FM in nearby Pacific Grove. She produced 851 broadcasts for a devoted legion of listeners, engaging supporters and detractors for 17 years until she died of cancer in 1988 at age 66. She holds the distinction of teaching the first accredited college course in conspiracy, “American Assassinations,” this at Monterey Peninsula College.

Before the Internet, Brussell collected her trove of research using old-school techniques. She lined the walls of her home with dozens of bookshelves and 39 four-drawer filing cabinets filled with newspaper clippings, magazines, underground zines, unpublished manuscripts, declassified government documents and other materials. She used these to cross-reference items and talking points she found in mainstream press.

“There are ways to counteract the evil being purposely planned,” Brussell said. “Study history. Separate fears and prejudices from facts. Recognize facts from propaganda. Invest energy in fighting for what you believe in. Analyze harder where we are going and what you are doing about it. What do you really believe in? How much do we care?”

She found a supporter in journalist Paul Krassner, founder of the now-defunct counterculture magazine The Realist, who also wrote the introduction to this collection. He affectionately referred to Brussell as the “Bionic Researcher.” He published her first full-length article in 1972, a piece on the Watergate break-in. (John Lennon financed it, providing $5,000 for printing costs.) Brussell also published articles in Hustler, People’s Almanac, The Rebel and the Berkeley Barb, and assisted with research for Ramparts.

“I thought she was an American hero,” Krassner told the San Jose Mercury News. “We should look upon her as a role model for not accepting things that are spoon-fed to us, not accepting it automatically as the truth.”

Some critics may charge that Brussell’s dusty relics of history have no value in contemporary America. But one need look no further than her issues – government surveillance, endless war, the oligarchic control of the ultra-wealthy – to see vital connections to our times.

Brussell’s conspiracy theories feel remote from those of far-right ideologies that underlie today’s so-called conspiracy culture. Brussell inclined her attitudes more toward the counterculture of the 1960s and ‘70s, although she did not allow the “right and left dichotomy,” as she put it, to skew her research.

Contemporary conspiracy-mongers (disciples of the John Birch Society; Gary Allen, author of None Dare Call it Conspiracy) thrive on elements of xenophobia and nationalism. Brussell despised this. She focused on the ruling class, what we hear today called “the illuminati,” and speculated that it might successfully implement a “divide and conquer” strategy in times of turmoil to distract people from the crimes of those in power. Some thoughts seem eerily prophetic.

I believe that the Nazis and the Minutemen and the Christian movement are going to get very strong, and at the same time there’s going to be a massive depression. I see large masses of people around the world being deliberately starved every day. I see terrible things happening to reduce the population of this earth, so that those who control the corporations don’t have to provide for the needs of the poor.

These words, spoken in 1978, sound more relevant today than when first uttered.

Pundits, politicians and academics use the term conspiracy theorist to smear the reputations of those who hold unpopular opinions or who challenge a widely accepted narrative. Feral House publisher Adam Parfrey points out in this book’s preface that the CIA facilitated the term through media to discredit those who challenged Warren Commission findings that Lee Harvey Oswald acted alone in Kennedy’s murder.

Civil discourse on conspiracies changed drastically when Obama appointed legal scholar Cass Sunstein to his cabinet in 2008 as administrator for the Office of Information and Regulatory Affairs. Sunstein co-authored an essay entitled “Conspiracy Theories” that proposed government agents infiltrate groups that promote “anti-government conspiracy theories” to disrupt and disband them in a fashion similar to former FBI Director J. Edgar Hoover’s COINTELPRO program.

Sunstein and co-author Adrian Vermeule state in their proposal, “Those who subscribe to conspiracy theories may create serious risks, including risks of violence, and the existence of such theories raises significant challenges for policy and law.”

Mae Brussell’s collection challenges such blind assertions, touching on a wide range of crimes in fact perpetrated by the US government: the FBI’s complicity in the assassinations of Black Panther Party leaders; the CIA’s recruitment of Nazi war criminals into the agency shortly after WWII; the U.S. military’s backing of right-wing terrorist regimes in Latin America.

Many of these events get lost in the memory hole. It takes someone like Brussell to rescue them, to preserve this information and use it to prevent such events from happening again. One might not agree with her conclusions or methodology, but she still offers valuable insight into issues in today’s society.

Mike Kuhlenbeck’s journalism has appeared in The Humanist, Z Magazine and The Des Moines Register. He is a member of the National Writers Union and Investigative Reporters and Editors.