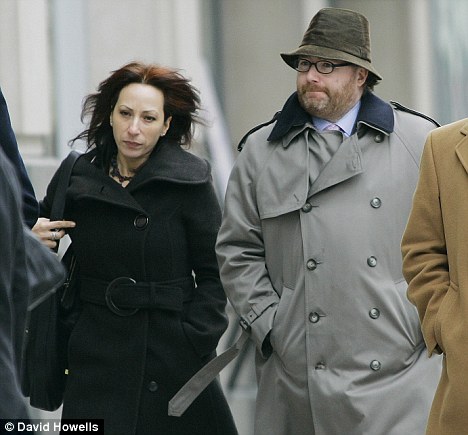 Carving a new career: Paul Hamill is now based in Washington where he works as an adviser for a lobbying firm

The man who wrote the infamous ‘dodgy dossier’ for Tony Blair about Saddam Hussein’s weapons is now a £100,000-a-year adviser working at the nerve centre of Barack Obama’s military and foreign policy establishment.

The intelligence dossier produced by Downing Street weeks before the Iraq War, which included out-of-date research cut and pasted from the internet, has played a key part in the Chilcot Inquiry into the conflict.

And today The Mail on Sunday can reveal for the first time how the man who wrote the document used it to launch a career that has put him on the fast-track to making a personal fortune. Despite the scandal, former Ministry of Defence civil servant Paul Hamill is now Director of Government Services at Hill & Knowlton, America’s most influential lobbying firm.

The job gives him control of contracts with federal agencies which, according to a Congressional report, were worth some £10 million in 2000, the latest year for which total figures were available.

The Mail on Sunday can disclose that:

•    Even after the ‘dodgy dossier’ was exposed, Hamill continued to boast of his role in producing it.
•     He flew to Iraq with the head of MI6, John Scarlett, to take up a senior post fixed for him by Downing Street.
•     Hamill was forced to quit his job in Baghdad following complaints to No10 about his conduct.
•     He resigned from the Civil Service and took a job with a US-run security firm in Afghanistan before moving to Washington.

Hamill’s duties with Hill & Knowlton include advising officials on the National Security Council, a committee chaired by President Obama. He also claims to counsel officials at the Pentagon and CENTCOM, the US military command in charge of operations in Afghanistan and in Iraq. It is believed one of Hamill’s roles is to advise the US government on how to handle public relations in war zones – precisely the task that landed him in hot water in the UK.

Sources have revealed new details of how Hamill came to write the ‘dodgy dossier’ in February 2003 – and the extraordinary turnaround in his career.

Hamill, 35, was a low-ranking MoD official until he was talent-spotted by Alastair Campbell while working on the ill-fated ‘45 minutes from doom’ dossier in September 2002. Campbell was impressed by the eagerness of Hamill, who had the Orwellian-sounding title of Director of Story Development. His job was to pick out ‘killer facts’ in raw intelligence and turn them into hard-hitting material that would help Labour’s war propaganda.

Campbell gave him one of the top posts in the Coalition Information Centre, a team of hand-picked spin doctors.

When Campbell wanted another dossier on Iraq, he gave the job to his ‘star pupil’ Hamill, who duly delivered it. When the document was hailed by the then US Secretary of State Colin Powell at the UN for its ‘fine’ research, the CIC chief, diplomat Jim Poston, sent an email to all staff saying: ‘Take a bow CIC.’

Days later, it was revealed the dossier was crudely cobbled together from magazine articles and an out-of-date thesis by an American student. Instead of being demoted or sacked, Hamill was given an even more sensitive post when Saddam was toppled. He was sent to work with UK officials based in Saddam’s former palace in Baghdad. Conveniently, it also kept Hamill away from the British Press.

But after protests about his ‘show-off’ behaviour reached Downing Street, Hamill returned to the UK and resigned from the Civil Service. After then working in Kabul for a US firm said to have been run by a former CIA agent, he joined Hill & Knowlton two years ago.

On his profile on Linkedin, a professional networking site, he claims he ‘provides strategic counsel to…Hill & Knowlton clients.’

Hamill also advises a number of key high-level foreign policy leaders regarding National Security Strategic Communications; these include officials within the NSC, CENTCOM, key Committees of Congress, and officials from a number of other countries’.

Reached at his office by The Mail on Sunday, Hamill refused to comment. Within hours most of his information vanished from Linkedin. Hill & Knowlton did not respond to requests for comment.