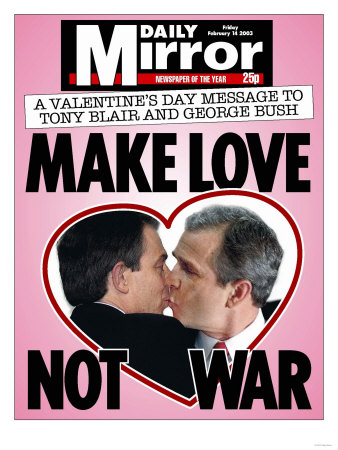 The leader of Plaid Cymru’s MPs has said he has a memo showing Tony Blair and George Bush struck a secret deal to invade Iraq a year before the 2003 war.

Elfyn Llwyd told the BBC’s Straight Talk he had written to Iraq Inquiry chair Sir John Chilcot to say he would be prepared to hand the document over.

He said the memo, which is marked “Top Secret and Confidential” contradicted statements made by Mr Blair.

Mr Blair previously told the inquiry he made no “covert” deal with Mr Bush.

Mr Llwyd, who in 2004 launched a campaign to impeach the then prime minister for misleading Parliament over the war, said he could not be specific about what was in the memo, which he “believed” was American in origin.

“I’ve not shown it to anybody to try, because I, frankly, I didn’t want to be in any position where I was accused of undermining anything that was going on at the time,” he told interviewer Andrew Neil.

He said the contents of the memo were “in direct contradiction of many, many statements by the ex-prime minister in the House of Commons, including several questions he answered to me”.

Asked if he believed it could be the “smoking gun” that anti-war campaigners have been looking for, he said: “It could be”.

He said the memo had “become somewhat historical” but it was relevant to the Chilcot inquiry, which was why he had written to the Iraq inquiry chairman.

Mr Llwyd added he was ready to disclose “everything he knew” to Sir John and his committee.

He told interviewer Andrew Neil that whether the inquiry quizzed him in public or private was “up to them” and he was now waiting for a reply from Sir John.

Witnesses to the Chilcot inquiry have suggested Mr Blair told Mr Bush at their April 2002 meeting at the ranch in Crawford, Texas, that the UK would join the Americans in a war with Iraq.

But when he appeared before the committee last week, Mr Blair said there had never been any secret about what the two men discussed in private – that Saddam Hussein had to be dealt with and “the method of doing that is open”.

He told the panel: “What I was saying – I was not saying this privately incidentally, I was saying it in public – was ‘we are going to be with you in confronting and dealing with this threat’.

“The one thing I was not doing was dissembling in that position. How we proceed in this is a matter that was open. The position was not a covert position, it was an open position.”

Pressed on what he thought Mr Bush took from the meeting, he went further, saying: “I think what he took from that was exactly what he should have taken, which was if it came to military action because there was no way of dealing with this diplomatically, we would be with him.”