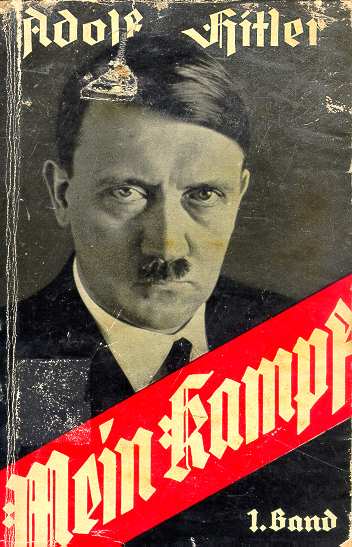 We like to think of the human catastrophe of Nazism as receding ever further - and permanently - into the past. But then word of an event such as last week's rally of 5,000 neo-Nazis in Dresden restores to it a burr of ugly contemporaneity.

"Our Struggle: Responding to 'Mein Kampf,' " at the Contemporary Jewish Museum, does the same, but in a strenuously exorcising spirit. The exhibition appears here for the first time in North America.

Written in a fury during Hitler's imprisonment for his 1923 stab at seizing power, and aggressively edited by a sympathetic publisher to make it readable, "Mein Kampf" plotted the strategy for Nazi overthrow of Germany, fueled by anti-Semitic vitriol.

Ellia found that she could deal with the book only by defacing its pages. She began writing and drawing on them and otherwise creatively disfiguring them to stifle their demonic power.

Then it occurred to her to present the same challenge to artist friends and others she knew or met who she believed would react viscerally to the book.

She began handing out pages of "Mein Kampf" - or "Mon Combat" - and the collection of transfigured sheets that returned to her over three years became "Our Struggle."

About 450 of the 600-odd pages she amassed hang at the museum. They make an absorbing spectacle, even for visitors on whom details of their play with the French text will occasionally be lost. (The museum provides some helpful translation notes.)

Ellia included a score or more of the pages with which she began the project, but most of the contributors are not artists by vocation and did not see one another's pages before their publication in book form.

The book, "Notre Combat," is available only in French, but it illustrates the entire project and belongs in every library of contemporary art.

The pages in "Our Struggle" inevitably blur the distinction between professional and "outsider" art. One contributor, Gustave Wallas, who happened to have no fixed address at the time, submitted 47 pages all told.

Several artists of note, such as Patrice Killoffer, handed in pages of remarkable ingenuity. On one, he tidily drew a tall, hollow cylinder. It doubles as a cannon and as a smokestack, a figure for mass cremation at the death camps.