" ... Historians say the files could show whether West German authorities knew about Eichmann's whereabouts long before his capture, or even helped him. German law enforcement and intelligence agencies had many former Nazis, including SS and Gestapo officers, working in senior positions after the war. ... " 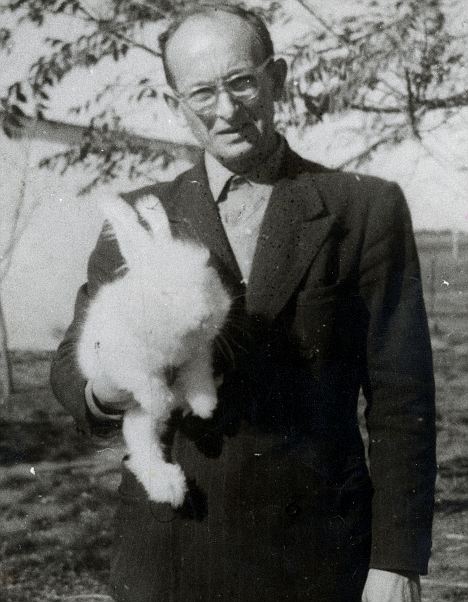 Germany's secret service has lost a court battle to keep secret thousands of potentially embarrassing files on Nazi criminal Adolf Eichmann. Even though it remains unclear when and how many of the files will be opened, the ruling sets a precedent that could force Germany to reveal the full extent of collusion between West German authorities and fugitive Nazis half a century ago.

A German court has ruled against a decision by the country's foreign intelligence service, the BND, to keep classified thousands of files on Adolf Eichmann, one of the main organizers of the Holocaust.

A German freelance journalist based in Argentina, Gabriele Weber, has been seeking access to the BND's 3,400 documents on Eichmann, who escaped to Argentina after the war, was abducted by Israeli agents in 1960, put on trial in Israel and hanged. She took legal action after the BND refused to open the Eichmann files on the grounds that disclosure would damage Germany's national interests.

The BND's refusal to open the files, which date back to the 1950s and 1960s, has triggered speculation that they contain embarrassing information about possible collusion between West German authorities and former Nazis in the 1950s and 1960s.

The Federal Administrative Court in the city of Leipzig ruled on Friday that the refusal to declassify the files was unlawful. "The reasons given for keeping them classified were only partly justified by the contents of the files and did not permit withholding them completely," the court said in a statement issued on Friday.

Files Could Show How Nazis Escaped

Historians say the files could show whether West German authorities knew about Eichmann's whereabouts long before his capture, or even helped him. German law enforcement and intelligence agencies had many former Nazis, including SS and Gestapo officers, working in senior positions after the war.

"I am very curious to know what information was meant to be kept from the public," Gabriele Weber said in a statement. "There have long been indications that not only the German government, but large German firms as well, had contacts in Argentina with Nazis and war criminals."

However, it remains unclear when, whether and what proportion of the BND files will be disclosed.

A spokesman for the court said that despite the ruling, the files will remain closed until the BND and its government masters decide how to proceed. The agency has the option to impose a new disclosure ban but it would have to give new reasons for doing so, which would then have to be reviewed again by the court. Or it may decide to disclose part of the files.

The BND could not immediately be reached for comment. Pressure on the agency to release its old files on Nazi fugitives has increased since the CIA declassified many documents relating to Nazi war crimes in 2005 and 2006.

Remo Klinger, a lawyer represting Gabriele Weber in the case, said he had little doubt the BND would declassify the files with various names blacked out, a standard practice in the release of intelligence documents.

"We think the case has shown that one can no longer assume that everything is a state secret just because it has been declared a state secret," he told SPIEGEL ONLINE. "It sets a legal precedent. There has never been a ruling in which the BND was ordered to disclose documents."

Uki Goni, an Argentine journalist who has researched the Nazi community in Argentina after the war, told SPIEGEL ONLINE, said the refusal to release the files so far was embarrassing to Germany.

"The whole episode is disgraceful and a deep stain on current-day Germany. It is absolutely shocking that the German government continues to hide this information today. The German government should make not only the BND's Eichmann file public, but all its secret documents related to fugitive Nazis," said Goni.

"The real reason the German govenment is withholding the Eichmann file is because it is afraid that if it gives in on Eichmann, then the floodgates will be opened and it will face a deluge of requests for all its secret post-war Nazi-related records, with potentially very embarassing consequences."

Germany's files on Eichmann and other Nazi fugitives could shed light on how thousands of committed Nazis and former members of Hitler's SS, including more than 200 indicted war criminals, lived comfortably in exile in Argentina and other South American countries in the 1950s and 1960s, after escaping there with the help of former comrades, Swiss officials, the Catholic church and the Argentine government, said Goni.

The BND had argued that the files contained information supplied by a foreign secret service which had not agreed to their disclosure, and that keeping the files closed was necessary for the sake of Germany's foreign policy, especially in the Middle East.

The agency also said that the files contain private information about people still alive and was therefore subject to German privacy protection laws. Opening the files would entail unwarranted administrative costs because all that personal data would have to be blacked out, the BND argued.

But the court, which reviewed the top secret files in non-public sessions by a panel of judges, said the documents did not contain much information that was hitherto unknown. It said they referred to events so long ago that they were merely of historical interest.

"The files largely deal with the National Socialist tyranny, the persecution and systematic murder of Europe's Jews, the role of various members of the Nazi regime, namely Adolf Eichmann, as well as events relating to that person in the post-war period," the court said. ...