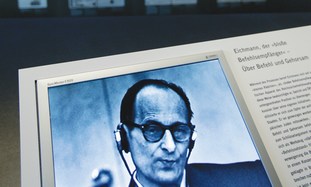 ‘Der Spiegel’ reports that a German BND agent consulted with Israeli prosecutors “over the closing argument,” in the prosecutor’s office.

BERLIN – The West German administration of Konrad Adenauer, Germany’s first post-Holocaust Chancellor (during 1961-62), considered issuing payments to an Israeli judge presiding over the Eichmann trial to prevent future Nazi prosecutions, according to a newly released document from the archives of Germany’s Federal Intelligence Service (BND).

The weekly Der Spiegel magazine reported on Saturday that a BND agent consulted with Israeli prosecutors “over the closing argument,” in the prosecutor’s office. According to the BND document, the agent notified the Bonnbased West German government that Israeli prosecutors “would show a positive position toward State Secretary Dr. Globke.”

Hans Globke, who issued a legal commentary supporting the anti-Semitic Reich Citizenship Law – which stripped German Jews of their citizenship – was a key aide to Adenauer, and administered the West-German Chancellery.

According to Der Spiegel, the 84-year-old former-Israeli prosecutor, Gabriel Bach, denied any manipulation or improper influence from the Adenauer administration in connection with the Eichmann trial.

Bach prosecuted Eichmann 50 years ago, and later served as a judge on Israel’s Supreme Court. Bach was born in Berlin and fled Nazi Germany with his family in 1938.

Adenauer had a single purpose during the Eichmann trial: to extract from the Israeli side what Eichmann planned to say, and which Nazis he intended to incriminate as part of Germany’s elimination of European Jewry. High-level posts in West Germany’s post-Shoah government were filled with Nazis – including Hans Globke and Reinhard Gehlen – who oversaw West Germany’s Gehlen intelligence organization, the predecessor to the BND.

Gehlen was involved in the elimination anti-Semitism of the Nazis on the eastern front during World War II.

While the BND document reveals new light on West Germany’s panic about damage to the reputation of the Federal Republic, declassified CIA documents five years ago showed that Adenauer already went to great lengths to protect Globke.

In 1960, the Adenauer government convinced the CIA to exert pressure on Life magazine to delete a reference to Globke in Eichmann’s memoirs, which the magazine published.