40 Years Later, Investigators Hope to Learn If There Was an Order to Open Fire on Campus Protesters 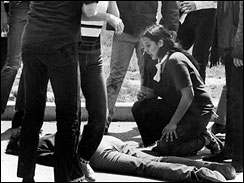 (AP) April 29, 2010 - An analysis will be done on a tape that could answer a lingering question in the 1970 Kent State University campus shootings that killed four students.

Nine other students were wounded by Ohio National Guardsmen during an anti-war protest.

Three years ago shooting victim Alan Canfora reviewed a copy of an audio recording and said it shows Guardsmen were ordered to shoot. The tape has dense background noise and it's not clear who's speaking.

Now, a high-tech analysis is planned on the original May 4, 1970, recording made by Terry Strubbe. The Kent State student set the microphone of his reel-to-reel tape recorder on his dorm room windowsill.

The Kent State Shootings: A Chronology

The tape will be converted to digital format to try to determine if there was an order to shoot.