From alleged connections to the CIA to possible plans to overthrow the government, there is a sense of mystery surrounding Khalifa Haftar, the rogue general whose forces led an attack on the Libyan parliament in Tripoli Sunday.

Tripoli has accused the former rebel commander of attempting to stage a coup when his forces, backed by warplanes, helicopters and rocket fire sent lawmakers running for their lives as they ransacked the legislature and demanded parliament’s suspension.

But Haftar has sought to portray himself in a different light, as a defender of the Libyan people, intent on ridding the country of Islamic extremists and a government that supports them.

Whatever the case, what is clear is that Haftar has become a significant player amid the political chaos that continues to plague Libya three years after the fall of Muammar Gaddafi, with various militialeaders battling to fill the power vacuum left by the former dictator’s demise.

It would not be the first time he has had a hand in shaping the future of the country.

A Benghazi native, Haftar began his military career under Libya’s former monarchy. In 1969, he was one of a small group of officers, led by Gaddafi, that overthrew King Idris and installed Gaddafi in power, where he would remain for the next 42 years.

In the final year of the war, Haftar and a unit of Libyan troops he was commanding were captured by Chadian forces. Gaddafi disavowed Haftar and claimed the general was not part of the Libyan army, effectively consigning him and his men to prison in Chad. 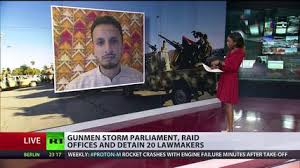 What happened next remains unclear. Some sources say he spent the next few years in incarceration, others that he told the Chadian government of his decision to turn against Gaddafi and secured training facilities for him and his men near the country’s capital, N'Djamena , as part of the Libyan National Army (LNA) – the military wing of the opposition Libyan National Salvation Front.

It is around this time that links between Haftar and the CIA first begin to emerge. According to a New York Times report from 1991, American intelligence services under the approval of then resident Ronald Reagan funded and assisted the training of Haftar and his 350-strong contingent of troops in ”sabotage and other guerrilla skills” in Chad as part of efforts to bring about the overthrow of Gaddafi.

When the Chadian government was itself overthrown in 1990, the US sought a new home for Haftar and his troops, said the report. After failed attempts to settle them in Kenya and Zaire (now the Democratic Republic of Congo), Washington was eventually force to grant them asylum and bring them back to the US.

The next chapter of Haftar’s life would prove more strange still: he would spend the next 20 years living a seemingly quiet life with his family in suburban Virginia. This prompted further rumours of his involvement with the CIA. Haftar’s home, in the town of Falls Church, was just a few miles away from the CIA’s headquarters in Langley. According to the New York Times, Haftar himself has said he often spoke to the CIA during his time in Virginia.

What else Haftar got up to while in the US is unknown, but it is likely that he maintained links with the Libyan opposition, given that, shortly after the uprising against Gaddafi began in 2011, he had returned to his native land to lead the ground forces of the National Transitional Council (NTC), the rebellion's political wing.

But after Gaddafi’s fall, Haftar’s position among the various rebel commanders vying for influence became uncertain.

His supporters in the army tried to have him named the new chief of staff, but the interim government – the National Transitional Council – whose trust Haftar was never able to fully gain, did not officially recognised the move.

“After the fall of the regime, Haftar’s ambition worried the new authorities,” said FRANCE 24’s correspondent in Libya, Marine Casalis.

Relegated for a time to a relatively peripheral role, his popularity began to increase as the security situation deteriorated and the new government failed to exert authority.

“The inaction of Tripoli in this fight against extremist groups has given him more popularity,” said Casalis.

“After three years of targeted assassinations of security forces, his operations against Islamist militia won him more support from army leaders who feel the central authorities have done very little to protect them and protect the country.”

Before Sunday’s attack, little was heard from Haftar save a video released in February in which he announced an "initiative" aimed at suspending the interim government and parliament, and which was perceived by some as a prelude to a coup attempt.

Whether that is indeed his intention remains to be seen.  His actions, however, already look like they are deepening divides between the network of competing militias who have established power bases in Libya.

At least one al Qaeda-inspired group, known as the Lions of Monotheism, has vowed to take on Haftar’s forces.

In a video posted by the group online Monday, a masked militant identifying himself as Abu Musab al-Arabi delivers a message to the rogue general.

“You have entered a battle you will lose,'' he warns.

“We are with Haftar,” Commander Wanis Bukhamada told Reuters.

The special forces are the best trained troops of Libya’s nascent army. They have been deployed since last year in Benghazi to help stem a wave of car bombs and assassinations, but struggled to curb the activities of heavily-armed Islamist militias roaming around the city.

An air base in Tobruk in Libya’s far east also said it had joined Haftar’s forces – a significant move since it remains unclear how much backing Haftar has within Libya’s regular armed forces and the powerful brigades of former rebels who toppled Muammar Gaddafi in 2011.

Musa Kusa: The CIA Spy Who Came in from the Desert

Censored by US Media: Libyan Rebels are Led by a CIA Jackal