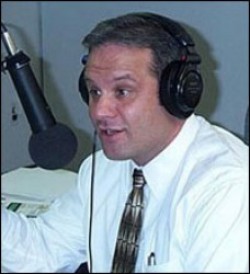 New Jersey radio host Hal Turner is well known as one of the most vicious neo-Nazis in America, a man who routinely suggests killing his enemies.

Railing against President Bush, he told his audience last June that “a well-placed bullet can solve a lot of problems.” He has written that “we need to start SHOOTING AND KILLING Mexicans as they cross the border” and argued that killing certain federal judges “may be illegal, but it wouldn’t be wrong.” In 2006, after he published an attack on New Jersey Supreme Court justices that also included several of their home addresses, state police massively beefed up security for the members of the court, checking on one justice’s house more than 200 times.

Hal Turner is one serious extremist. He may also be on the FBI payroll.

On Jan. 1, unidentified hackers electronically confronted Turner in the forum of his website for “The Hal Turner Show.” After a heated exchange, they told Turner that they had successfully hacked into his server and found correspondence with an FBI agent who is apparently Turner’s handler. Then they posted an alleged July 7 E-mail to the agent in which Turner hands over a message from someone who sent in a death threat against Sen. Russ Feingold (D-Wisc.). “Once again,” Turner writes to his handler, “my fierce rhetoric has served to flush out a possible crazy.” In what is allegedly a portion of another E-mail, Turner discusses the money he is paid.

On Thursday, as the E-mail exchange was heatedly discussed on a major neo-Nazi website, Turner suddenly announced he was quitting political work. “I hereby separate from the ‘pro-White’ movement,” he said, adding that he was ending his radio show immediately. “I will no longer involve myself in any aspect of it.”

The apparent revelation set off a torrent of criticism from experts in criminology and the use of informants. “This is clearly over the line,” said James Nolan, an associate sociology professor at West Virginia University who is an expert in police procedure and a former unit chief in the FBI’s Crime Analysis, Research and Development Unit. “Informants may be involved in drugs, and you overlook that because of the greater good. However, these are viable threats — they could be carried out — that the FBI clearly knows about. I want to see the FBI stop it.”

Informants, of course, are commonly used by law enforcement agencies that have no other way of proving suspected criminal activity. “These are frightening groups whose members deserve to be investigated and infiltrated,” said Jack Levin, a criminology professor and expert on the radical right at Northeastern University. “My concern is that Turner’s methods actually are more dangerous and destructive than the evil they are seeking to cure. His threatening messages may actually inspire neo-Nazis to up the ante, to engage in even more destructive behavior.”

Turner, 45, has developed a reputation as one of the hardest-line racists on the radical right since starting up his radio show seven years ago. He has routinely ranted about such things as a “Portable Nigger Lyncher” machine and slimed those he hates as “savage Negro beasts,” “bull-dyke lesbians,” “faggots” and worse.

But it is his threats that are legendary.

In 2006, Turner told his audience to “clean your guns, have plenty of ammunition … [and] then do what has to be done” to undocumented workers. Around the same time, he suggested that half the U.S. Congress “may have to be assassinated.” A year earlier, he suggested “drawing up lists of yeshivas,” or Jewish religious schools. He once started a website called www.killtheenemy.com for the purpose of posting photos and names of those who marched in favor of immigrant rights. Hearing that anti-racist activist Floyd Cochran was visiting Newark, N.J., last June, Turner said he had “arranged for a group of guys to physically intercept” Cochran and added that Cochran would likely “get such a beating that his next stop is going to be University Hospital.” In a July letter, Turner wrote to the Southern Poverty Law Center, which publishes the Intelligence Report: “If you do not change your stance soon, you will face a wrath of fury that you will never be able to defend yourself against. We have the ability to reach out and touch someone.”

Last July, Turner posted photographs of a pro-immigrant activist being taken away by an ambulance outside Turner’s North Bergen home. “Click the images below to see how I kicked the shit out of one such douchebag,” he wrote.

Reaction on the radical right to the apparent revelation was mixed, as activists tried to figure out if Turner really was an informant. But to many, there was little question it was Turner, based on the style of writing in the E-mails. “It does sound like Hal,” wrote “Varg” on the Vanguard News Network, a neo-Nazi website. “I agree,” responded “Yankee Jim.” “The Email definitely sounds like Hal.”

Turner’s alleged E-mail to his FBI handler is also addressed to a detective sergeant with the New Jersey State Police who trained with the FBI Police Executive Fellowship Program in 2004. Interestingly, as long ago as May 2006, Turner wrote of a visit paid to him by the two men, saying they had come to his house to warn him that “Washington has instructed us to close you down.” In that same posting on his website, Turner described himself as the type to inspire “a whole slew of potential Timothy McVeighs. I don’t make bombs,” he added, “I make bombers.”

“It’s become so routine,” Turner said of FBI visits in a 2005 interview with The (Hackensack, N.J.) Record, “they are like my private FBI agents.”

Hate Watch is the blog written by the staff of the Intelligence Report, an investigative magazine published by the Alabama-based civil rights group Southern Poverty Law Center, edited by Mark Potok.