“… Honduran congressman Porfirio “Pepe” Lobo hired him after the former president — Chávez acolyte Manuel Zelaya — was forced out by the military. Rendón guided Lobo to the presidential palace, a victory he casts as a blow to Chávez. …” 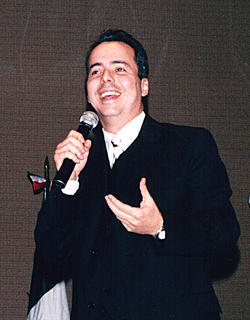 A little before noon on a spring day, J.J. Rendón wakes up and dresses as usual in a Jedi-like black frock. He takes a drag on a cigarette and rubs sleep from his dark eyes. Golden statues line his shelves, and water burbles over a Buddhist shrine that’s a centerpiece of his bayside condo in Brickell’s Jade Residences, a 48-story tower with private elevators activated by thumbprint readers.

“My entire career, I’ve fought for democracy, equality, and civil rights,” he says in a quiet, sandpaper voice. “That’s made me unpopular in some circles.” Rendón is virtually unknown in Miami, where he lives in exile from his native Caracas, but he’s become one of Latin America’s most important political figures, a Karl Rove-esque gun-for-hire for right-leaning candidates from Mexico to Honduras, Venezuela, the Dominican Republic, and Aruba. His biggest triumph yet came last month in Colombia’s presidential race, when he transformed a tightly knotted two-man race into a landslide victory for Juan Manuel Santos. Rendón says he pulled off the win with shrewd management and a mastery of psychology. But Colombian journalists complain that his knack for gossip-mongering and engineering underground attacks — a skill that earned him the nickname “J.J. Rumor” — tainted the election. “Rendón is seen as this malevolent figure in Colombia,” says María Teresa Ronderos, an editor at Colombia’s Semana magazine. “Santos had a weak campaign until he hired Rendón. Some think he helped not just by reorganizing, but also with rumors and with dirty tricks.” Rendón, of course, says he plays clean. Recently, he even took the fight over his reputation to Miami courts, filing defamation suits against Radio Caracol (1260 AM) and a prominent Mexican gubernatorial candidate. He says the station smeared him by reporting he’d blackmailed a Colombian official, and the candidate falsely accused him of working for the CIA. “If you can prove I did anything illegal, go to the judge,” he says, chuckling softly. “It’s just talking. There’s no substance there at all.” Rendón was born in 1964 in Caracas. His mother and father were local organizers for Acción Democrática, a political party that helped end dictator Marcos Pérez Jiménez’s reign in 1958. Throughout his childhood, local party candidates held rallies and meetings in the family home. Young J.J. — short for Juan José — studied psychology at universities in Caracas and Italy before landing an advertising job in his early 20s. His first political work came by accident, when candidates meeting at his house asked for his help crafting slogans. Rendón showed a preternatural gift for the work. When he was age 24, Rendón volunteered for Carlos Andrés Pérez’s presidential run. He began as a driver but eventually found a spot assisting American consultant Joseph Napolitan, who had helped JFK win office. The American offered the neophyte a list of 30 tips on how to win elections — advice Rendón still heeds today. His big break came five years later, when he was hired to help run the sputtering presidential campaign of Rafael Caldera. Caldera won a narrow victory, and Rendón earned credit as the mind behind the win. From these early influences, he crafted an edgy political style. “If it’s within the law, then I don’t have any misgivings,” he recently told Semana. Part of his success has also been a carefully cultivated image. He not only talks often about Eastern mysticism, but also wears a flowing dark wardrobe. He stares intensely, his pale skin and prominent forehead suggesting a sly Bond villain. After Rendón’s name became known in Venezuela, politicians in Aruba and the Dominican Republic called on him. In 2000, after Vicente Fox ended the Institutional Revolutionary Party’s seven-decade stranglehold on Mexico’s presidency, the party hired him. It was then when he went from backstage to center stage. The press began vigorously attacking his style, calling him, for instance, a “neo-Nazi Venezuelan.” One report claimed he had started rumors in a Michoacan election that a candidate was gay and had a “network of Cuban horsemen” at the ready to pleasure him. In 2004, Rendón picked a very public fight with Venezuelan President Hugo Chávez, claiming on national TV that voting machines had been rigged in a recall vote. He hasn’t been back to his homeland since. Though Chávez never directly threatened him, he says, “Friends told me I would never even get out of the airport if I returned.” He got a measure of revenge last year when Honduran congressman Porfirio “Pepe” Lobo hired him after the former president — Chávez acolyte Manuel Zelaya — was forced out by the military. Rendón guided Lobo to the presidential palace, a victory he casts as a blow to Chávez. It didn’t take long for Rendón’s reputation to become an issue in Colombia’s presidential race. He was already well known there after working for outgoing president Alvaro Uribe’s Party. In 2007, several newspapers claimed Rendón had tried to blackmail a party official with threats of exposing the man’s use of prostitutes. http://www.miaminewtimes.com/2010-07-01/news/j-j-rendon-is-latin-america-s-karl-rove/