"... As the Colombian military engaged in the killings, the United States unconditionally supported it with intelligence, covert C.I.A. action and billions of dollars in aid. ..."

BUENAVENTURA, Colombia — On Aug. 23, 2008, Víctor Gómez left his home outside of Bogotá, telling his family he had been offered work in another region of Colombia. The 23-year-old man had been struggling to provide for his young daughter as a part-time doorman. Two days later Mr. Gómez was dead, with a bullet between his eyes, in a faraway morgue, where the army had reported him an enemy combatant killed in action.

Mr. Gómez was just one of possibly thousands of civilians executed by Colombian military personnel between 2002 and 2008. Civilian prosecutors are investigating more than 3,000 cases, many involving young men lured by fake job offers to distant towns, where the army murdered them. Soldiers and officers, under pressure from superiors to show “positive” results and boost body counts in the conflict against guerrilla groups, would report the victims as insurgents or criminals killed in combat. Targets included the homeless, farmers, children and people with mental disabilities. In Colombia, the cases are known as “false positives.”

Now, the administration of President Juan Manuel Santos is close to securing passage of legislation that threatens to deny justice for these victims by transferring the cases of military personnel accused of the killings from the civilian to the military justice system. The bills, including one that could be approved as early as next week, appear aimed to appease the military leadership, which has been reluctant to support President Santos’s current peace talks with the Revolutionary Armed Forces of Colombia (FARC) guerrillas.

There has been some important progress in prosecuting low-ranking soldiers for “false positives.” But most cases remain unresolved and just a handful of senior officers have been convicted. This is a major concern for the chief prosecutor of the International Criminal Court in The Hague, who is closely monitoring investigations in Colombia. Her office has described the killings as apparently “systematic” and driven by a policy adopted at least within certain army brigades. 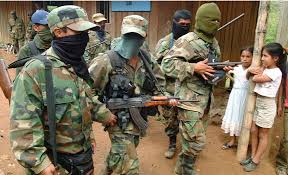 Civilian prosecutors’ investigations may be slow, but they at least allow for the possibility of resolving the thousands of unsolved cases and bringing to justice the top officials most responsible for “false positives.” Colombia’s military justice system has consistently failed to investigate alleged rights abuses by soldiers. So by expanding the jurisdiction of military courts over human rights crimes such as these, the Santos administration’s proposed legislation would all but eliminate the possibility that many of the killers and high-ranking officers behind the murders will be brought to justice.

The killings peaked between 2006 and 2008, when Mr. Santos was defense minister under the hard-line President Álvaro Uribe, whose administration was racked by human rights scandals. To his credit, Mr. Santos pushed to remove three army generals after the Colombian media broke the “false positives” story in late 2008. As defense minister, he also took significant steps to ensure that the cases were subject to civilian jurisdiction. And as president, he has repeatedly promised accountability for the killings. Yet at the same time, his defense minister is steadfastly pressing for several bills that would virtually guarantee impunity by sending the cases to military courts.

The Santos administration has invoked a range of groundless legal justifications for the legislation. But the real reason for the bills seems to be that justice is finally starting to catch up to the military for “false positives,” and its leadership wants President Santos to halt it. The top brass’s main bargaining chip in pressuring him is through his peace talks with FARC, and whether the military will support the effort.

President Santos should withdraw his support for the military jurisdiction expansion bills, including a draft constitutional amendment his defense minister recently introduced. That could make it tougher to keep the military’s precarious support for the peace process. However, if his government enacts the laws, he risks going down in history as being the defense minister when “false positives” surged and the president when they were covered up. Even though no evidence has surfaced implicating him in these killings, allowing them to go unpunished would forever stain his legacy, no matter what he is able to achieve in the peace process.

As Colombia’s most important ally and a major backer of its military, the Obama administration should use its considerable leverage to press President Santos to abandon the bills. The United States also has a special responsibility to ensure justice for “false positives”: As the Colombian military engaged in the killings, the United States unconditionally supported it with intelligence, covert C.I.A. action and billions of dollars in aid.

More important than the legacies of President Santos and the United States in Colombia, the rights of thousands of victims’ family members are at stake. “After six years, there still hasn’t been any justice,” Carmenza Gómez, Víctor’s mother, told us recently.

“We want justice for all the victims,” she said. “They were tricked and didn’t deserve to die like that. Just because they were poor doesn’t mean they had no right to live.”

Cocaine, Death Squads and the War on Terror (Book Review)