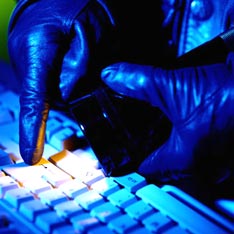 "... Illegal monitoring of traffic in the military communications network is almost unheard of, except in the case of foreign spies. It suggests a complete breakdown of ethical standards at L-3. ... There was 'adequate evidence' that L-3 'committed theft.' ..."

(Reuters) - A unit of defense contractor L-3 Communications Holdings (LLL.N) that has been suspended from receiving new federal contracts has admitted to monitoring emails to assist its commercial interests, according to a U.S. Air Force memo obtained by Reuters on Thursday. The Air Force memo said the company's actions were inappropriate, adding "there is an ongoing federal criminal investigation" into the actions of the L-3 unit. "L-3 is cooperating fully with the government and has no other comment at this time," the company said in a statement.

New York-based L-3 disclosed in a regulatory filing on Wednesday that it received notice from the Air Force that its Special Support Programs Division, formerly known as L-3 Joint Operations Group (JOG), has been temporarily suspended from receiving new orders or contracts from U.S. agencies amid a probe of alleged improper use of email.

The June 3 memo from the Office of the Deputy General Counsel of the Air Force said the U.S. Special Operations Command used a third-party vendor to audit email applications used at the command that were managed by L-3 JOG. The audit showed the L-3 unit "purposefully and intentionally" monitored emails of employees of L-3, workers with other contractors and U.S. government employees, it said.

The L-3 unit arranged to have specific emails copied to and kept on an L-3 monitored database, then released and sent to recipients in such a manner that neither the government, nor those whose emails were monitored, would know communications had been copied, according to the memo. "L-3 JOG says it used the SOCOM network willfully and deliberately in an attempt to discover whether its employees had shared its information with another contractor," it said.

The memo raised eyebrows in Congress and industry circles.

"This is a shocking abuse of contractor discretion," said Lexington Institute analyst Loren Thompson. "Illegal monitoring of traffic in the military communications network is almost unheard of, except in the case of foreign spies. It suggests a complete breakdown of ethical standards at L-3." The memo also said L-3 obtained information tied to a competition for follow-on contract work and collected material that involved a bid protest to which the company was a party. T

he Air Force memo did not identify the protest, but L-3 in March 2009 filed a protest with the Government Accountability office against a nine-year, $5-billion logistics deal awarded to Lockheed Martin Corp (LMT.N) by Special Operations Command. GAO, the congressional agency that rules on contract protests, said it dismissed the matter a month later after the command said it would reevaluate the submitted proposals. The new competition is still under way, and L-3's contract continues through the first quarter of 2011. Lockheed declined comment.

"As a matter of policy, we do not comment on matters under government investigation," said spokeswoman Nettie Johnson.

An Air Force letter to L-3 informing it of the suspension said the defense contractor could submit information opposing that move within 30 days after receipt of the notice. A copy of the letter was also obtained by Reuters.

L-3, a provider of explosive detection devices and aviation products that had 2009 sales of $15.6 billion, said in its Wednesday filing with the U.S. Securities and Exchange Commission that it was providing information to the Air Force. It said it could not assess the outcome or impact of the proceedings, and noted the Air Force was also considering whether to suspend L-3 Communications Integrated Systems LP, the parent of the special support programs division.

JP Morgan analyst Joseph Nadol forecast minimal impact on L-3's near-term revenue, but said its ability to bid for the recompeted contract was a bigger issue.

"We continue to see the loss of the JOG contract as the largest risk  ... and L-3 may not be able to bid on the contract recompete as a result of the hold," he said in an analyst note. He added an expansion of the investigation to the parent would clearly be "an important negative development."

Jefferies & Co analyst Howard Rubel said the issue underscored the need for improved cybersecurity. The L-3 JOG contract is expected to generate about $450 million in revenue annually, contributing about 2 percent, or 15 cents, to per-share earnings, he wrote in a research note. Shares of L-3 Communications closed nearly 1 percent higher at $79.88 on Thursday, underperforming the broader market which was up about 2.5 percent.