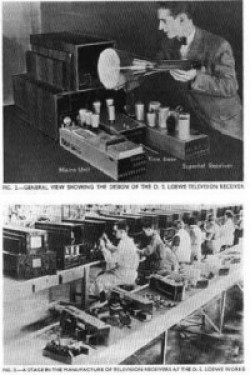 What would have happened if Fascist Germany wasn't destroyed? Scholars have various opinions on this issue — some suggest the dropping of atomic bombs and others the invention of ridiculous weapons or spaceships. On Tuesday, the TV channel Rossiya will share a sensational new theory with its viewers. The creators of the documentary film "The Magical Eye of the Third Reich" believe Hitler's Germany was one step away from launching an entire TV industry. KP has spoken with the film's authors, who in turn agreed to share the most compelling fragments of the film with our readers.

The documentary filmmakers dug up the protocol of an interrogation of SS-Hauptsturmführer Kurt Schultzmayer regarding the execution of Eva Braun’s relative — Hans Georg Otto Hermann Fegelein. He had tried to escape from Berlin with his pregnant wife to save her and her child.

In the transcript, Schultzmayer tells the investigator shocking news. A "Tibetan" or "man scarlet," who was among those who had "arrived from Lhasa and didn't wear swastikas," had watched the execution of Hitler's ally while standing nearby behind a patch of trees. And he wasn't only watching.

The first live broadcast is considered Hitler's speech at the 1936 Olympic Games in Berlin.

"The 'Tibetan,'" said Schultzmayer, "pointed a strange, small, elongated object towards what was transpiring." The SS officer proceeded to explain to the investigator that Reichsführer-SS Heinrich Himmler had personally warned him about the Tibetan’s presence and ordered him to "stay out of the way."

"Himmler wanted the execution to be viewed somewhere else, as well," Schultzmeyer said.

Later in film, the authors reveal a letter from the daughter of German politician and Public Enlightenment and Propaganda Minister Paul Joseph Goebbels, Helga, to her cousin Rudolph Hesse: "Henrich! If father only saw what you filmed during the fight! No, we need to film something else — funny, for example. What you can't film with the big 'iconoscope,' you can film unnoticed with your 'pipe with an eye...' It would be great if Sakhib gave me a similar gift. Then we could film at the same time and exchange our thoughts."

What is Helga referring to? What was this mysterious "pipe with an eye" that could film events unnoticed and help people to communicate at the same time? Is she referring to the "strange, small, elongated apparatus" that the "Tibetan" used to film the execution of Eva Braun's uncle? What exactly are they referring to? A modern mobile phone with a camera? And who is this Sakhib who gave such remarkably strange presents to the children of the rulers of the Third Reich?

In Himmler's so-called visitation diary, eight meetings are noted between the Reichsführer-SS and the director of Tibetan expeditions Ernest Sheffer, as well as four meetings with envoys from Lhasa, who were immediately put to work at Himmler's Forschungs und Lehrgemeinschaft das Ahnenerbe e.V. ("Research and Teaching Community of Ancestral Heritage"). It was there, in Tibet, that German nationalists from secret societies hoped to receive ancient knowledge that was meant to show Germany its sacral path. Was this ancient knowledge a key to mastering modern-day TV? 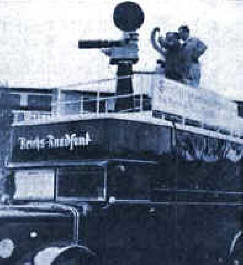 Officially, the technology allowing TV studios to broadcast live saw the light of day in 1935. A year later, in 1936, serious feats were made despite the unwieldy TV station system of the day. Live all-national broadcasts were made from stadiums, meetings and parades where Adolf Hitler spoke.

It's generally thought that the first live TV signals were broadcasted from Hitler's speech at the Berlin 1936 Olympic Games. However, the first person to be broadcasted live was actually a far less significant government official named Olgard Hadamovsky.

At the time, TV technology was about the same worldwide. The following types of announcements would appear in the daily papers: "Watch! Watch! A living person will be broadcasted on the 56.6 airwave!" It looked like this — an image, such as a person — on a small TV screen. The individual would be sitting in front of the TV transmitter, turn his head from the right to the left, and then from the left to the right... Then another person would appear on screen and put on his glasses.

But even then, propaganda master Goebbels saw greater potential in the technology. He began sending radio waves at the same time the TV signals were broadcasted.

According to Nazi Germany’s state ideals, German women weren't supposed to work. The true Aryian woman was meant to stay home and raise her kids. For this audience, Goebbels' wife Magda suggested building special rooms adjacent to new laundry mats where 30 women or more would gather around the TV to watch broadcasts, talk among themselves and discuss what they saw. Magda turned to her husband at the Public Enlightenment and Propaganda Ministry for funds to realize the project. Goebbels promised to allocate the money if the committee agreed to thoroughly investigate the facilities.

Goebbels: "The advantage of a visual image over the audible broadcast is the audible becomes a visual image with the help of an individual’s imagination, which can't be kept under control. Regardless, each will always see his own." Thus, it's worthwhile to "immediately show everyone what should be seen, so everyone sees the same thing."

In 1945, tens of boxes containing reels of TV programs were found in the Third Reich's Chancellery. After reviewing the footage, it became clear that the German engineers were literally one step away from mastering modern-day technology.

Several boxes even had the label: "For cable."

Soviet journalists and military translators were amazed at another unexpected discovery. The Third Reich, which was long thought to have focused its energy on military technologies, had given birth to an entirely new international industry — news, sports, crime, music and educational TV.