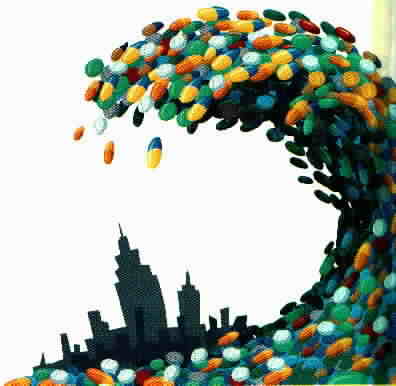 A massive voter push back is underway as powerful pharmaceutical lobbying forces target dietary supplement manufacturers. A Health Freedom watchdog group has reported that in a recent 24 hour period, over 43,000 emails were received by a senate judiciary committee that was hearing Senate Bill 3767, a measure introduced by agribusiness-friendly Senator Tom Leahy that would expose supplement makers to draconian criminal liability for advertising vague medicinal claims on their product labels, even if said claims are backed by peer-reviewed scientific research.

Thanks to efforts by Natural Solutions Foundation and other concerned groups, S. 3767 was amended on Thursday with what is being considered more amenable language to Health Freedom advocates. The amendment, clearly the result of pressure from outraged citizens, added the following words to the definition of the crime of misbranding: “… and with conscious or reckless disregard of a risk of death or serious bodily injury …”

“The amendment is a powerful signal that Sen. Leahy and his Agribiz cohorts had no choice but to look for a way to make the bill less bizarre and unpalatable,” says a Natural Solutions Foundation news release.

Opponents of the bill foresee it as a way for pharmaceutical and processed food interests to monopolize both food and supplement distribution through FDA and Federal Trade Commission fiat, stifling competition and degrading quality within both industries. For many consumer groups, the issue boils down to freedom of “commercial” speech. Rima E. Laibow, M.D, writing for healthfreedomusa.org says:

“While Senator Leahy continues to push his dangerous and unnecessary bill through the Judiciary Committee (um, we thought that it was already illegal to use interstate commerce to knowingly spread dangerous substances…), the Senate leadership had to acknowledge wide-spread public opposition to criminalizing food (and supplement) distribution.”

Though the Health Freedom movement isn’t calling this a victory like the one witnessed when public opposition buried an earlier (and more dangerous) bill proposed by Sen. McCain (which sought to impose similar regulations and labeling restrictions on supplement makers), they are encouraged to continue in their campaign to keep unwanted and, they argue, unneeded government regulation out of the whole food and health supplement markets:

“Thus, a bill which would have criminalized any distribution of food where FDA, FTC or other government agency later decided some rule, regulation, guideline or standard had not been met to the satisfaction of the bureaucracy (recalling that S. 510 allows secret regulations which could later have been said to have been violated), the added language at least references more traditional standards of criminal liability.”

News of Thursday’s senate hearings gave Health Freedom activists more than one reason to breathe a sigh of relief. Sen. Tom Coburn recently blocked the easy passage of S. 510, the Food Safety Modernization Act (a regulatory bill designed to place expensive compliance standards on even the smallest growers, market gardeners, food distributers and food warehouses). Opponents feared the broad language of S. 510, which some legal experts believe applied even to home pantries, would be inserted during the judicial committee hearing as an end run around Sen. Coburn’s hold. That was not the case.

However, the “serious harm” amendment will not stop supplement makers and whole food distributors from bureaucratic harassment by regulatory agencies, opponents fear. There has been a marked push by politicians closely linked to large agribusiness and pharmaceutical interests over the past few years to lay a regulatory mine field before businesses that are not equipped with the legal prowess to navigate their way to compliance or the funds needed to pay the price for accidentally detonating any of a myriad of restrictive and constantly changeable labeling ordinances.

Interesting, considering the FDA won’t even consider the labeling of genetically modified foods which have been found time and again to induce serious adverse health effects in lab animals.

“If Congress wants to criminalize distributing things that are harmful to the public … maybe, just maybe, it should criminalize ‘knowingly’ introducing dangerous drugs (including vaccines) into commerce! Like Vioxx, Avandia, Flu Vaccines, Bextra, for a very few examples, But, then, there might be a lot of drug company executives and maybe even some FDA officials who would face criminal charges,” writes Laibow.

S.3767 coupled with S.510 could reach the floor of the Senate for a vote as early as next week.