Monthly Updates on the Covert War

All other US covert operations: 12-77

* All but one of these actions have taken place during Obama’s presidency. Reports of incidents in Yemen often conflate individual strikes. The range in the total strikes and total drone strikes we have recorded reflects this.

At least four possible US drone strikes hit Yemen in January, all in the first half of the month. An unnamed farmer was reportedly among the 6-7 killed in these attacks.

Several media sources reported that the farmer was walking home early on the morning of January 15 when US drones targeted a vehicle carrying alleged members of al Qaeda in the Arabian Peninsula (AQAP). Although the car’s passengers were injured, the farmer – or bystander – was reportedly the only person killed. This account was later contradicted by a ‘well-informed source’ who told al Hayat the strike killed alleged al Qaeda member Abdel Majid al Shahry – a Saudi national. 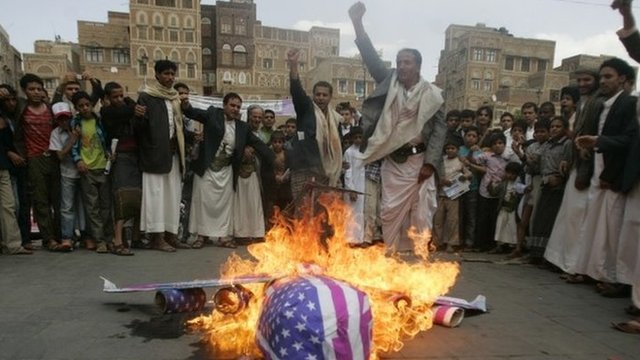 fTwo men injured in the first reported US strike of January were civilians, according to their parents. The wounded men were identified as Adnan Saleh al Taysi and Ibrahim Hussein al Aarif. As many as 10 members of the al Taysi family reportedly died in a drone strike that hit a wedding convoy in December. Up to 15 civilians were killed in this US attack on December 12. This month US officials confirmed an investigation into the claims of civilian deaths is underway.

The final reported strike this month, also on January 15, killed 3-4 people in Wadi Abeeda. Mohammed Saeed Jardan, an alleged militant and local to the area, was reportedly among the dead.

Also this month, three peers from the Conservatives, Labour and Liberal Democrats tabled amendments to the Defence Reform Bill that would increase scrutiny of US forces based in the UK. The draft reforms include establishing scrutiny groups to ensure US operations in Britain comply with domestic law. The proposed changes were prompted by reports that bases in the UK are part of the US drone war in Yemen and Somalia.

Drone Strikes’ Risks to Get Rare Moment in the Public Eye 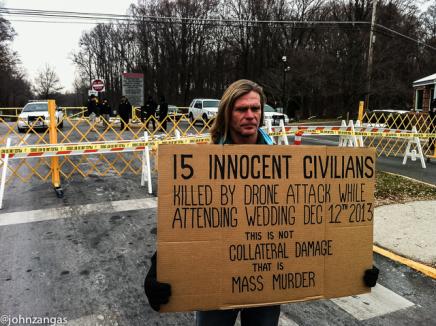 Following a deadly U.S. drone strike on civilians in Yemen, members of a dozen peace groups wearing blue scarves gathered at the entrance of CIA headquarters in Langley, Virginia. With guards and barricades on one side and cars whizzing by on Rt. 123 on the other, they held a vigil in memory of civilians, especially children, killed by U.S. drone bombings in Yemen, Afghanistan and Pakistan.

“The CIA touts that drones are accurate,” said Jack McHale of Pax Christi USA to about 30 protestors from groups including CODEPINK and Veterans for Peace. But, he said, according to the Navy’s own analysis, they’re no more accurate than traditional air power. “I think we saw that this week when a wedding party was targeted and 17 people were killed as a result of an armed drone in Yemen.”

The drone program is under the jurisdiction of the CIA, which has used its powers of covert secrecy to keep the program officially classified, and its missions a secret.

On December 12, a U.S. drone bombed a wedding convoy, killing 17 and injuring about 20 others. Yemeni security officials said that some of those targeted had suspected ties with Al Qaeda, but most of those killed and critically injured were civilians.

The demonstrators prayed, sang songs, and read the names of children who had been killed by drone attacks in the Middle East. While reading the names they placed small stones in a row at the entrance to the CIA facility.

Kathy Kelly, co-coordinator of peace group Voices for Creative Nonviolence, spoke of the destruction drone strikes cause to the people in villages and communities in the Middle East.

“There are about 600,000 children in Afghanistan who are homeless,” she said. “Every single day the war displaces 400 people. Where do the families go? They go to the most squalid refugee camps. Never before have I ever seen anything like a refugee camp in Afghanistan. Why can’t we reallocate our resources so that the $1.2 million spent on a drone that was shot down in Afghanistan can be spent on a shelter or an education that’s adequate for the children?”

The protestors wore blue scarves in tribute to the Afghan youth peace movement. The color, according to Kelly, is symbolic of the connection all humans share under one sky. It was the fourteenth vigil held by the peace groups at the CIA headquarters since they began the protests last year.

McHale debunked “five myths” of drone warfare: drone attacks are based on good intelligence, they keep us safe and increase security, they only target terrorists, they are inexpensive, and they are helping to win the war on terror.

The drone program, he says, costs billions of dollars. Each Reaper (MQ-9) drone made by General Atomics costs $12.5 million and every Hellfire missile costs $70,000.

He cited recent attacks in the U.S., Afghanistan and Yemen as evidence that drones strikes in the Mideast are not accomplishing their intended mission. “The blowback has been significant both here and abroad because of the Boston Marathon bombers, the attempted bombing in Times Square and just yesterday in Wichita, an airport worker was arrested.”

Kelly contends that the CIA is wasting brain power which could be used to solve some of the world’s problems. “Some of our finest minds trained within the Central Intelligence Agency are people who could give us the intelligence to steer through the very difficult times we’re approaching,” she said. “With shortages of fuel, shortages of water, and environmental catastrophe, we need all hands on deck, we need all the intelligence we can muster for the sake of the future generations.”

“We have to narrow the gap between law and justice,” she said. “Our friends at Pax Christi have taught us that the law that takes precedence over all other laws is the love commandment.” 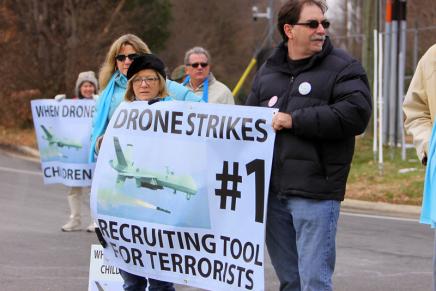