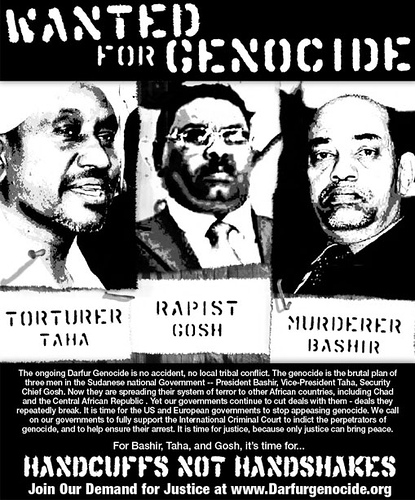 ” … The East African regime is not just an international pariah for its genocidal track record in the western region of Darfur, it’s officially been branded by Washington as a terrorist state, in part for its past harboring of Islamist radicals, including Osama bin Laden in the 1990s. Despite that, the CIA is continuing to train and equip Sudan’s intelligence service in the name of fighting terrorism. … “

American officials may be at odds over U.S. policy toward Sudan, but the CIA is soldiering on there.

The East African regime is not just an international pariah for its genocidal track record in the western region of Darfur, it’s officially been branded by Washington as a terrorist state, in part for its past harboring of Islamist radicals, including Osama bin Laden in the 1990s. Despite that, the CIA is continuing to train and equip Sudan’s intelligence service in the name of fighting terrorism.

The irony is not lost on critics of the arrangement.

“The U.S. government is training the Sudanese intelligence services and conducting bilateral operations with them — all in the name of the long war,” said a former intelligence officer who served in Sudan. “We also refer to the Sudanese as a state sponsor of terror, have called their activities in Darfur genocide, and supported the issuance of arrest warrants for the Sudanese president for genocide, war crimes and crimes against humanity, as defined by the International Criminal Court.”

“Certainly,” the former intelligence officer added, “the CIA is providing training to the National Intelligence and Security Service,” known as the NISS. “I suspect it was begun … in the very early days after September 11.”

In the beginning, the CIA-NISS relationship was very close-hold, he said, even shielded from other CIA personnel in the embassy because of concerns over Sudan’s grievous human rights record. Training sessions were probably done outside the country, he guessed.

“There has also been transfers of equipment” to the NISS, he said, “computers, etcetera.”

Another knowledgeable former U.S. intelligence official said the CIA-NISS partnership began even earlier, in the Clinton administration, and called it “incredibly valuable.”

“We have a had a long term relationship with the Sudanese, even when they closed the embassy for a short period in the late 90s,” the official said on condition of anonymity because the topic is so sensitive.

“We do not do much training with the Sudanese, except in the field of counterterrorism, and they have been an exceptional partner in helping us against the terrorist target.”

The CIA’s curriculum with the NISS “is pretty much the same as regular humint/CO [human intelligence/case officer] training, with a focus on targeting the terrorist, i.e., setting up meetings in secure places with surveillance and countersurveillance, knowing what info to look for, keeping all pocket litter, not allowing them to erase cell phones or computers,” the former official said. “It also involves ‘take downs’ of terrorists or their organizations …”

“The CIA flew Salah Gosh, head of the NISS, here to the U.S. in one of their jets during 2005,” the former intelligence officer who served in Sudan said. “He is up to his butt in the genocide in Darfur.”

Only last month, Amnesty International charged that “the Sudanese National Intelligence and Security Service (NISS) is carrying out a brutal campaign of killings, torture, arbitrary detentions, and mental and physical intimidation against opponents and critics of the government.”

“The NISS uses a variety of torture methods,” it added, “including: beating detainees while held upside down against a wall, electric shocks, whipping, sleep deprivation, kicking and stamping on detainees and beating them with water pipes.”

CIA spokesman George Little declined to comment on the agency’s relationship with the NISS, saying, “This agency does not, as a rule, comment on reports of relationships with foreign intelligence services.”

Likewise at the White House, National Security Council spokesman Mike Hammer said, “We are not going to speak about our ongoing counter-terrorism and intelligence programs with any specific country other than to say that we face significant terrorism related challenges in East Africa, and it is essential that we be able to work in partnership with the countries of the region to identify and disrupt potential terrorist networks.”

Some U.S. officials with intimate knowledge of the CIA’s program contend that the spy agency’s relationship with the NISS actually fosters human rights.

“The intelligence channel has been one tool our government has used to try to influence the Sudanese in terms of human rights and the rule of law,” said one such official. “That was a deliberate policy decision, made with inter-agency support, and—while everyone has their eyes wide open to everything that still needs to happen—the dialogue has had its benefits.”

Another, a senior administration official, said, “We’re not blind” to the reality of Sudan. “Everybody understands what’s going on there.”

“If the Sudanese go outside the box,” he maintained, “we can pull the plug.”

Such explanations evoke the darkest days of the Cold War, when successive U.S. administrations used the same rationales for allowing the CIA to have close relations with the security services of some of the world’s worst human rights violators, from South Africa to Argentina, Guatemala and Chile, saying they were necessary for the shadowy fight against Soviet-backed communism.

And as during that time, Obama administration officials have barely concealed their sharp differences over what to do about Sudan.