By Will Grant, BBC News, Miami

Hero. Rebel. Revolutionary. These are words one often hears in association with Ernesto Che Guevara.mBut they are not words you will often hear in Miami where many people see Che Guevara as a brutal guerrilla who brought Cuba nothing but misery with his communist ideals. 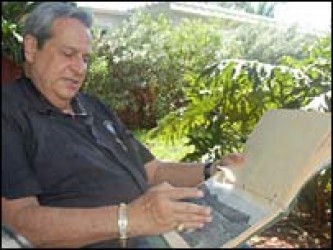 One of those anti-Che voices in Miami belongs to Felix Rodriguez, a Cuban-born former CIA agent who was part of the mission of CIA operatives and Bolivian army forces that captured and killed Che Guevara in October 1967.

Forty years on, how does he feel about the role he played in ending the life of one of the most iconic Latin American leaders of the 20th Century?

I visited the ex-CIA man at his Miami home. He was wearing a shirt emblazoned with the logo of the 2506 Association of the Veterans of the Bay of Pigs, another of his earlier military incursions against the Cuban government.

Mr Rodriguez was present at some of the most notorious events of US anti-communist involvement in Latin America during the Cold War, including training the Nicaraguan Contras and advising the Argentine military government during the 1980s.

It is a history of which Mr Rodriguez is fiercely proud.

His air-conditioned den is full of framed photographs and memorabilia of his CIA past: Felix Rodriguez and George Bush Senior talking in the White House, a CIA medal for exceptional service, a blood-soaked North Vietnamese flag.

But it was his short time in Bolivia with Che Guevara that interested me. Sitting by his pool, Felix Rodriguez showed me his Che scrapbook.

Inside were the yellowing and fragile pages of his log-book from October 1967: the expenses of every day meticulously recorded, each one within the $14 daily allowance from the CIA; a page from Che’s code book, supposedly designed by the Chinese government, with a fresh code for each different message.

There were also more macabre items: photographs of the dead Che, laid out on a table for the world’s press to see; the tobacco from Che’s final pipe; a photo of Che’s severed hands, which were cut from his body and put in formaldehyde to preserve his fingerprints, in case Fidel Castro tried to claim that the corpse was not Che’s.

And the most important item: a photograph of a captured, injured and bedraggled Che Guevara, standing next to the soldiers who had caught him and the 27-year-old Felix Rodriguez, who had interrogated him.

Wasn’t that humiliating for Che?

According to Mr Rodriguez’s version of events, the atmosphere was so friendly that Che willingly agreed to the photograph and even laughed when Rodriguez said: “Watch the birdie, Comandante”.

Che Guevara came to Bolivia after trying to foment revolution in Africa
An hour or so after the photo was taken, Che was killed.

Mr Rodriguez wanted confirmation on the crackly radio line. It was repeated: 500 – 600.

Mr Rodriguez broke the news to Che that there was to be no trial.

“Che turned white… before saying: ‘It’s better this way, I should have died in combat.'”

But wasn’t Che entitled to a fair trial rather than such an ignominious death in La Higuera?

“I could have tried to falsify the command to the troops, and got Che to Panama as the US government said they had wanted,” said Mr Rodriguez.

But he said it was a decision by the Bolivian presidency, and he had to let history run its course.

Memories of Che Guevara abound in this corner of Bolivia

“That was done by the Cuban government… Most people don’t know the real Che Guevara – the Che Guevara who wrote that he was thirsty for blood, the Che who assassinated thousands of people without any regard for any real legal process.”

After Che was killed, there was some argument over who should have his pipe. The iconic pipe belonging to the most famous guerrilla in the world. What young soldier there on that day wouldn’t want it?

Felix Rodriguez says it was in his possession but, after being asked several times, he gave it to the soldier who had shot Che so that he would “remember his deed”.

So did Mr Rodriguez have any regrets about what happened in 1967, I asked him.

Yes, he smiled. “I would have kept that pipe.”