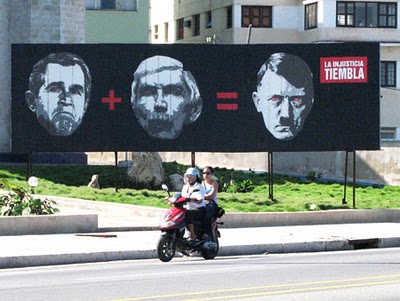 POSADA, "HE SIMPLY KNOWS TOO MUCH"

In the case of Posada, who is at liberty in Miami despite Venezuela’s demand, based on a bilateral treaty, for his extradition there to face charges for the in-flight bombing of a Cuban airliner, Agee reiterated his conviction that the international terrorist is being carefully protected as a former CIA agent.

"The current Bush administration refuses to respond to the extradition request, in violation of a long-standing treaty with Venezuela, for the obvious reason that with his long CIA history he simply knows too much."

Agee, who directed anti-Cuban operations for a number of years in Ecuador and Uruguay from the United States embassy in Quito, reported that the U.S. government, at the highest levels, discussed the possibility of eliminating Fidel Castro when he was still fighting the Batista dictatorship in the Sierra Maestra.

He reported, "In Miami starting in 1959 after the Revolution took power, the CIA developed a small army equipped with ships and aircraft that attacked Cuba for years."

Agee cited Richard Helms, former CIA Director, who in 1975 gave testimony to the U.S. Senate, and said of this terrorist activity, "This was a matter of American government policy." Agee recalled the explosion within the port of Havana of the French ship La Coubre in March of 1960 which killed 75 people and caused hundreds of injuries.

Agee continued, "At the same time the CIA was establishing counterrevolutionary networks on the island and infiltrating teams of terrorists and saboteurs. The soldiers in this army have been selected almost entirely from among the Cuban exile community living in Florida with historical ties to the Batista dictatorship."

THE CIA NEVER ENDED ITS LINKS WITH THESE PEOPLE

"They were trained by the CIA in explosives and sabotage. But there has never been any sign that the CIA ended its links with these people. Various Miami-based organizations appeared through the years with names like Brigade 2506 (the defeated CIA invasion force at the Bay of Pigs), Alfa-66, Omega-7, CORU, Comandos L, Brothers to the Rescue and Comandos F-4, just to name a few. Over the years some would disappear and others appear, but the main organizations are still operating today, planning and attempting strikes against Cuba."

In relation to the case of the five Cuban anti-terrorist fighters imprisoned in the U.S. for almost 10 years now on the pretext of espionage, Agee offered an interpretation that leaves no doubt.

He pointed out that the five Cubans’ only purpose in Miami was defending Cuba from terrorist attack. Yet they were arrested and imprisoned under particularly inhumane conditions, including 17 months of solitary confinement, allowed no contact whatsoever with their families.

Agee said, "Now the main point I want to make. It is the question of why the White House and Bush in particular, decided to impose such harsh prison treatment, which continues today, and to get the word to Judge Lenard that the longest possible prison terms should be imposed. Don't think for a moment that she acted independently in sentencing the Five. She knew perfectly well what the White House wanted."

Philip B. Agee, the CIA agent who was brave enough to leave the Company, disgusted by the immorality of its activities which he was able to expose in his books, died in Havana, at 72 years of age, on January 7, 2008.

He worked 12 years for the U.S. intelligence service, until he broke with them during the war in Vietnam.

In 1975 he published his book Inside the Company: CIA Diary, in which he not only revealed CIA operations in Latin America but also explained the agency’s methods of penetration and intervention.

After his death, Agee was honored by progressives in the United States and the world over as a genuine U.S. patriot who knew how to defend the most authentic values of his people in the face of the most corrupt circles of powers.