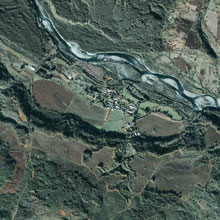 Satellite image of Colonia Dignidad in 2000

Chilean President Sebastian Piñera dismissed José Miguel Stegmeier from his newly appointed position as governor of the Biobio Region, just two days after appointing him to lead the region of the country that was hardest hit by the Feb. 27 earthquake.

The dismissal of the agricultural businessman was announced after news reports surfaced linking him to Chile’s notorious Colonia Dignidad, a religious cult that was led by German immigrant Paul Schaefer. Stegmeier allegedly was involved in money laundering activities for the cult.

Piñera gave his complete backing to Hinzpeter, saying, “This is the way one has to deal with the truth, fast and rigorous. . . . The government will take up this position every time it feels the appointment of an official was not the choice that Chile needs or deserves.”

Stegmeier said the accusations made against him were “completely false” and that he had very little connection to Schaefer, the group’s notorious boss, 88, who is now in prison in Santiago for child sodomy charges.

“I only talked to Schaefer one time, after my father’s death,” said Stegmeier, whose father was being treated at Colonia Dignidad’s hospital at the time.

In addition to his conviction for child sodomy, Schaeffer is accused of stealing at least U.S$3 million from Chile’s government through tax fraud. In March 2009, CIPER (Centro de Investigación y Informacion Periodistica) reported that Stegmeier was supposedly involved in these activities along with fellow agriculturalist Edgardo Neumann. Stegmeier is named in several ongoing lawsuits against the colony.

Until 1994, Colonia Dignidad was a tax-exempt charity in Chile. It was a German immigrant enclave founded in 1961 by Schaefer, a former corporal in Adolf Hitler’s army.

The community, renamed Villa Baveria in 1990 and located 225 miles south of Santiago, was an island unto itself for more than 30 years, with Schaefer committing serial child abuse and collaborating with the military regime of Gen. Augusto Pinochet by providing munitions and a torture facilities.

Under Schaefer's iron fisted leadership, children born at Colonia Dignidad were separated from their parents at age two and sent to live in communal nurseries and same-sex dorms. Adult men and women also lived apart. Schaefer sodomized many of these children.

Legal proceedings began against the Colony and Schaefer immediately upon restoration of democracy in 1990, but the cult leader was able to avoid apprehension, supposedly because local sympathizers advised him in advance whenever a police raid was planned, allowing him to hide in the Colony’s vast compound. Schaefer finally fled to Argentina in 1997 and lived in exile for eight years before he was captured in Buenos Aires by Interpol and then extradited to Chile in 2005.

Press reports allege that Stegmeier worked with the same group of supporters who made Schaefer’s 1997 escape to Argentina possible.

With Schaefer jailed and most of his former high command imputed in criminal activity of one kind or another, the Colony has slowly returned to a kind of normalcy. Agriculture crops are its main economic activity, but it also has a school, a free hospital, two airstrips, a restaurant, and a power plant.

Community elders are now in charge of all business activities and lead the community.