“… The Vatican has considerable Fascist sympathies. Pope Pius XI is credited with much admiration for Mussolini. That the Italian clergy as a whole are pro-Fascist is easy to understand, seeing that Fascism is a nationalist, authoritarian, anti-liberal, and anti-Socialist force. …”

Originally published in the Manchester Guardian on 12 February 1929 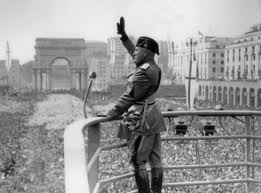 The concordat between the Quirinal and the Vatican signed in Rome yesterday is an event of such profound significance that no one can tell what its ultimate consequences will be.

One thing seems to be sure – Mussolini has achieved a great diplomatic success, perhaps the greatest of his career. On this there is general agreement. His gain is absolute. Whether the Vatican’s gain is so absolute, seems a little uncertain. There is evidently much Italian nationalist sentiment in the Vatican itself. In other words, the Vatican has considerable Fascist sympathies. Pope Pius XI is credited with much admiration for Mussolini. That the Italian clergy as a whole are pro-Fascist is easy to understand, seeing that Fascism is a nationalist, authoritarian, anti-liberal, and anti-Socialist force.

Will the concordat mean closer cooperation between clerical reaction and the various forms of political reaction (such as Fascism) all over Europe? It is impossible to tell as yet, but the question is one that gives Continental Liberals some uneasiness, and there must be some misgivings even amongst progressive Roman Catholics. To many the Pope’s spiritual sovereignty is a mystical conception that is violated by any temporal sovereignty, however small the realm over which it is exercised. That this temporal sovereignty should include membership of the League of Nations is a dangerous thought.

Happily there is a clause in the concordat by which the Vatican State expresses its wish to “remain extraneous to the temporal competitions between other States, as well as international congresses convened for this purpose.” Presumably the League is such an “international congress.” It does indeed seem improbable that either the Roman Catholic hierarchy or the Roman Catholic world would wish to see the Vicar of Christ dragged into the very temporal battles that are fought in the public arena at Geneva. It is reported from Rome that the care of the Roman Catholic missions in the Near East shall be conferred upon Italians. If that is so, Italian influence in the Near East will be reinforced at France’s expense, for until now the missions have been in French hands. And yet another question may have to be answered, not yet, but some time. The Fascist dictatorship is strong. But the day will surely come when it will go the way of all tyrannies. What will be the attitude of a free Italy towards a Vatican State so intimately bound up with the Fascist dictatorship?

These archive extracts are compiled by members of the Guardian’s research and information department. Email: research.department@guardian.co.uk