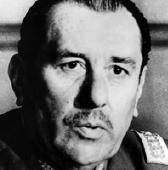 Santiago - The former head of Chile's secret police has denied involvement in the murder of the country's ex-commander in chief of the army, claiming the Central Intelligence Agency ordered the assassination.

"It was the CIA that gave the order to kill General (Carlos) Prats,"  Manuel Contreras, who headed the police during the regime of dictator Augusto Pinochet, told Chilevision television station.

Contreras, who was sentenced to 17 years in prison in early July in connection with the death of Prats and his wife in Buenos Aires, said he "very much regretted" the murder of the ex-commander, who taught him at the country's military academy.

"We didn't kill anyone who wasn't a terrorist... I didn't order the killing of anyone. If you have a terrorist who is fighting against you... it's kill or be killed," he said.

"I don't have any blood on my hands," added Contreras, saying he was "proud" of having "eliminated terrorism in Chile."

Pinochet's regime is accused of the death or disappearance of about 3 000 people, most of them opponents of the military government, which came to power after overthrowing elected socialist president Salvador Allende in September 1973.

Earlier this month, Chile's Supreme Court sharply reduced the sentence Contreras received for the murder of Prats and his wife, from two life sentences to 17 years. But Contreras, who suffers from diabetes and has cancer, has already been sentenced a total of 400 years in prison for forty convictions of human rights violations.

About 560 soldiers and police have been prosecuted for similar crimes. Around 200 have been convicted but only 65 are actually serving time in prison.