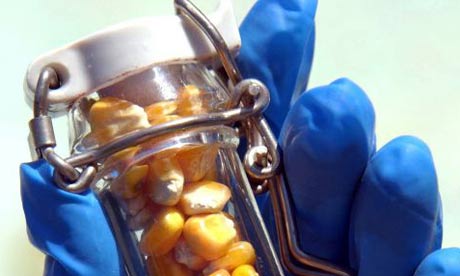 (NaturalNews) Genetically modified organisms (GMO) or genetically modified crops (GM Foods) are fast becoming the only type of staple crops grown in the United States. Over 90% of soybeans, over 70% of corn, and more are all grown from GM seeds.

The number one producer of GM seeds is Monsanto and that company has been busy ensuring it has a strong say in every aspect of agriculture and food labeling in America – one large market shares in every type of seed grown in the U.S. (not just corn and soybeans).

NaturalNews readers are not new to the evils of GM foods, of course.1 From immune system problems to organ failure to severe harm to the environment, the negative impacts of GMO seeds and crops are well-documented. If that’s the case, then, why is it that they are so common and why do the GMO giants seem to be ever-growing and encroaching on more and more farms and foods?

Through bullying, lobbying, and putting key figures into key positions of government. That’s how.

Of course, this three-part frontal assault wasn’t invented by the GM seed makers. It’s been used by Big Pharma, the Military-Industrial Complex, Banking and Wall Street, and plenty of others before.

To execute the three-pronged attack, Monsanto had to gain control of the agricultural markets first, so it targeted individual crops with its GM seeds. It did this by making seeds that were herbicide tolerant (HT ready) and marketing them alongside it’s flagship product, RoundUp. RoundUp is an herbicide (plant killer) derived from Monsanto’s first product, commonly known as Agent Orange. That history should explain where Monsanto learned the corporate three-punch takeover game: from the Military-Industrial Complex where it was born.

Once a relatively large share of the seeds being planted were owned by the company, Monsanto then moved into politics, pushing to make more and more of their wares legal and accepted. This required lobbying efforts on a large scale. In 2009 alone, Monsanto spent over $8.5 million lobbying in Washington and untold millions in individual states.2 They also began intimidating farmers and using strong-arm tactics to continue their market share growth. Eventually, of course, their political lobbying would not be enough and more direct control would be needed.

Inside control. That came recently with some key appointments.3

Former Iowa Governor Tom Vilsack has been appointed Secretary of Agriculture while Michael Taylor, a former chief lobbyist for Monsanto, is a new senior adviser for the U.S. Food and Drug Administration (FDA).

Vilsack has long been a supporter of GM crops and factory farming. Taylor is the Deputy Commissioner for Foods and is in charge of policy for food safety for the FDA. Both are key positions of power over America’s food supply.

It’s this three-pronged encirclement of American agriculture and foods that is giving Monsanto total control over our food supply. Which means no amount of health reform will make you well if the very basis of your health, food, is unhealthy.

Previous Article
Whistleblower who Exposed JPMorgan Chase Gold Market Manipulation Burned Out of His Office, Injured in Hit-and-Run
Next Article
'Food, Inc.' and the Tyranny of a Corporate Controlled Economy (Film Review)

'Food, Inc.' and the Tyranny of a Corporate Controlled Economy (Film Review)
Apr 04