" ... Among the tactics used by the Secret Intelligence Service (SIS) in Operation Embarrass were the bombing of five ships used by potential immigrants, intimidation and the creation of a fake Palestinian defence group. ... " 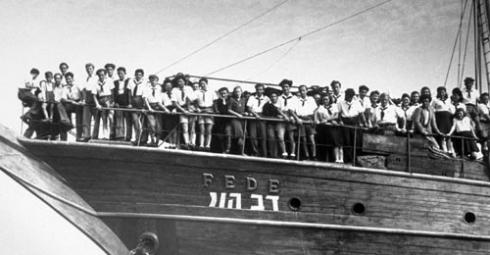 Among the tactics used by the Secret Intelligence Service (SIS) in Operation Embarrass were the bombing of five ships used by potential immigrants, intimidation and the creation of a fake Palestinian defence group.

The British government gave the go-ahead to the campaign to slow illegal immigration into Palestine, provided there was "no risk of casualties being incurred" and no link could be traced back to the government.

The revelations come in the first authorised history of the SIS, MI6: The History of the Secret Intelligence Service 1909-1949, by Professor Keith Jeffery. The book was published on Tuesday.

Prof Jeffery said: "Operation Embarrass was one of the most amazing stories I found. I just stumbled on it. It was like a spy novel. These are astonishing operational stories. Uncovering them made the hairs stand up on the back of my neck."

Before searching the archives, he had to agree to keep certain stories secret for national security reasons, but Operation Embarrass is revealed in full.

Prof Jeffery said: "It's quite explosive and you can see why the anxiety levels might go up, not just in the agency but in Whitehall as well. A lot of stuff in the archives was destroyed, so finding this tale was a reassurance. If it had been me, I would have shredded stuff like this.

"There is the possibility it could make things difficult for the Foreign Office. But I dug my heels in, and said it was very important this was revealed.

In late 1946, the government asked the SIS to develop "proposals for action to deter ships' masters and crews from engaging in illegal Jewish immigration and traffic". Around £13,000 was spent on the operation.

A SIS report stated: "Action of the nature contemplated is, in fact, a form of intimidation, and intimidation is only likely to be effective if some members of the group of people to be intimidated actually suffer unpleasant consequences."

Options put forward for the campaign included the use of sabotage devices, tampering with a ship's fresh water supplies and crew's food, or setting fire to ships in port.

SIS chief Sir Stewart Menzies suggested blaming the action on a specially-created Arab organisation. The agents were instructed to devise failsafe reasons for their presence abroad and were told that if rumbled, "they were under no circumstances to admit their connection with the government".

Prof Jeffery said: "The book really does show the James Bond side of it. Embarrass is closer to the perception of the spy image than other stories in the book."

In summer 1947 and early 1948, the plot led to attacks on five ships in Italian ports. The British made it a priority that no one was on board in order to avoid casualties. One ship was a a "total loss" and two others were damaged.

The British set up a notional organisation - Defenders of Arab Palestine - which claimed responsibility for the work against Jewish immigration.

Operation Embarrass ended in April, before the UK pullout from Palestine the following month. But Prof Jeffery concludes that the campaign had little or no effect. One SIS officer wrote that the failure to carry out a planned operation to disable the President Warfield ship in the summer of 1947 had been the biggest missed opportunity.

Instead, the renamed Exodus set sail with 4,500 Jewish refugees, leading to one of the most infamous episodes in the battle to create Israel. British forces seized the Exodus off the coast of Palestine. Three people died and the immigrants aboard were forcibly returned to Europe.

"The cost," said one SIS officer, "both direct and indirect to the government, must have been enormous. All of this could have been spared if the Foreign Office had permitted the SIS to take the appropriate action against the President Warfield."

Prof Jeffery said: "After the disaster with the Exodus, the SIS guys pretty much said 'we told you so'. They could have blown its rudder off and averted the crisis.

"This was a fantastic job for me. I was like a child in a sweetshop. But I also feel this is part of the accountability process. British taxpayers funded these operations. You might say after 60 years what difference does it make, but you can tell it does. People will look at this and put the record straight."