Learning Lessons From the Know Nothings - The Constantine Report
0 SHARES

Learning Lessons From the Know Nothings 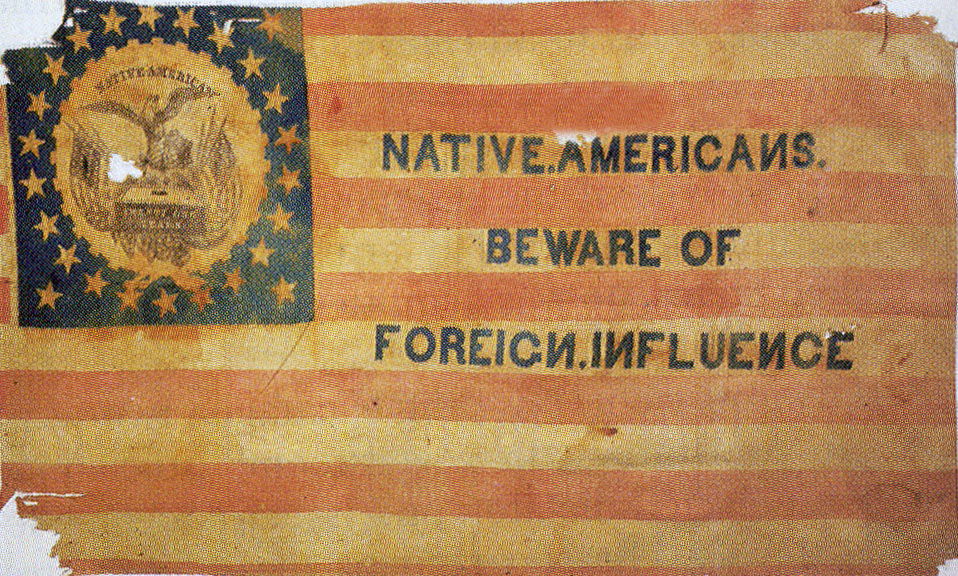 There can be little doubt that America is in foment. Listen to or read the news and it is hard to pick out reasoned thought from among all the angry words. Tea Party adherents rage against the government, determined to throw the scoundrels out and to return America to some imagined past of small government, low taxes, individual freedom and deregulation.

Tempers are dangerously elevated, suspicion is rampant, and the canny leadership of the Republican Party is attempting to co-opt Tea Party members’ dissatisfaction, melding it into its own. Newt Gingrich has expressed the hope that the Tea Party will become “the militant wing of the Republican Party.” Amazingly, he is willing to hitch his political fortunes to a movement that has called for a “second bloody revolution”—which would be, in effect, treason against his own country, supposedly a nation guided by law.

It is hard to imagine another time in American political history when the nation has been so polarized. Or is it? A little review of history will show that at least some of the issues that excite today’s firestorm have been the fuel for previous third-party conflagrations. In the 1850s, for instance, the aptly named Know Nothings gained power quickly on their platform of nativism, immigration restrictions and denial of naturalization for those flooding to this country from Europe.

The Know Nothings, who started life as the American Republican Party, originated in New York in 1843. The movement soon spread to other states and the Native American Party became a national party in 1845. In 1855 it renamed itself the American Party, the “Know Nothing” term growing out of its semi-secret organization. When asked about its activities, members were supposed to reply, “I know nothing.”

What is known is that the party evolved out of fear and bigotry, some of same the forces driving American society today. The Know Nothings were alarmed by the spike in immigration from Ireland and Germany as hundreds of thousands fled starvation, war and political repression in their homelands. In 1847, annual immigration topped 200,000 for the first time, exacerbating nativist fears that the flood of Catholics entering the country would erode American society. They argued that the Pope would wrest control of the government from the nation by filling the country with Catholics faithful only to him—a fear still echoed in 1960 when John Kennedy sought the presidency.

The Know Nothings drew their adherents from workers or small farmers whose jobs or ways of life were threatened by the cheap labor and unfamiliar cultures of the new immigrants. Their platform called for, among other things: Severe limits on immigration, especially from Catholic countries; restricting political office to native-born Americans of English and/or Scottish lineage and Protestant persuasion, (echoes of which can be heard today in the continuing focus on President Obama’s place of birth and religion); mandating a 21-year wait for citizenship; restricting public school teacher positions to Protestants; mandating daily Bible readings in public schools; restricting the sale of liquor, and restricting the use of languages other than English.

In 1854, the Know Nothings had much the same presence that the Tea Party enjoys today at the time of the mid-term elections. Know Nothings swept Massachusetts, their biggest victory, and captured seats in other New England capitols. After the elections, Know Nothings claimed to have exerted decisive influence in Maine, Indiana, Pennsylvania, and California.

As with the Tea Party, anger was the strong motivator and the movement was not without violence. Catholics were intimidated to keep them away from the ballot box and in 1855 in Louisville, Ky., Know Nothings killed 22, injured many more and destroyed property during a hotly contested gubernatorial race.

The Know Nothings shot to national prominence and as quickly faded. Their closed-door policy lost much of its steam when the Civil War began and the despised immigrants were needed by the Union to fill the ravaged ranks of its Army. The party, founded on bigotry, also tore itself apart over the issue of slavery.

The Know Nothings fought for an ideal of America for Americans, a concept hard to define at any time. When does an American, any American, become one? We are rightly known as a country of immigrants because our families all, at some point, came from elsewhere. Now, immigration has again become a hot button issue as American debates what to do about the millions of illegal immigrants who live and work in our society. Some in the Tea Party, those staunch defenders of their own individual liberties, are willing to abrogate the civil rights of others to deal with them. A New York Times/CBS News poll showed 82 percent of people who consider themselves Tea Party supporters say illegal immigration is a “very serious” problem and the movement openly embraced Arizona’s new draconian immigration law.

That law, written by a Tea Party supporter, would allow law enforcement officials to examine the documents of anyone they profile as a potential illegal alien. It would also make it a crime for immigrants not to have proper identification and allow citizens to sue their local government for not enforcing the new law. Does anyone hear an echo of all those movie Nazis who demanded, “Vere are your papers?”

Immigration is a secondary issue for the Tea Party movement, well behind concerns over reducing taxes, government spending, and promoting a hands-off standard for government when it comes to controlling business. But implicit in all those demands is a curtailment of social programs that help the underprivileged, that allow little children—yes, many of whom will not be Caucasians—to grow up to grab at the brass ring that the affluent whites have always held in their hands. We must be careful amidst all the irrational talk and anger being generated that we remember we are a nation with a soul and that our country will ultimately be judged in the world’s eyes by how well we treat the most vulnerable members of our society.

Kathryn Boughton is associate editor of The Litchfield County Times.