‘I feared I’d end up dead in the woods like Dr Kelly,’ says biological warfare expert who criticised Britain and U.S.

Another "conspiracy theorist" with irrational fears of Washington's Republican peacock palace and London's dancing poodles? We comport, you deride. - AC 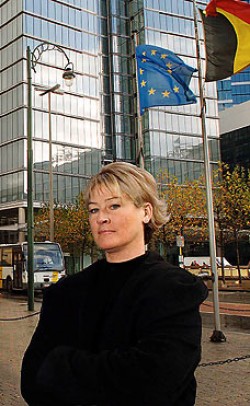 Fighting back: Jill Dekker was given special protection by the Belgian government after a series of 'sinister' incidents

An EU expert on biological warfare has told how she fears ending up 'dead in the woods' like scientist Dr David Kelly after an alleged campaign of intimidation by members of MI6 and the CIA.

Jill Dekker, a bio-defence expert based in Brussels, has reported a string of sinister incidents – including the parking of a hearse outside her house – after making a speech critical of British and American policy in the Middle East.

Her claims are included in a new book by Liberal Democrat MP Norman Baker which argues that Dr Kelly was murdered to silence his criticism of the grounds for going to war in Iraq.

American-born Dr Dekker has been billed at security conferences as the director of the 'public health preparedness programme' at the European Homeland Security Association (EHSA), a security think tank.

She was placed under the protection of the Belgian government after reporting a series of sinister incidents earlier this year.

The Belgians confirm that they mounted a three-month protection operation earlier this year for Dr Dekker, who has advised the European Commission on bio-terrorism issues, but refuse to be drawn on the extent to which her fears were wellfounded or why the protection was eventually lifted.

The EHSA bears many of the hallmarks of a 'front' organisation for espionage activities, although Dr Dekker refuses to say anything about it except that it answers to the French government.

Established in 2004, it holds workshops and conferences, and claims partnerships with a number of security-based thinktanks around the world.

It appears to exist only in cyberspace, with its staff, including its president, French career diplomat Richard Narich, only contactable by email. Dr Dekker is not listed on the EHSA website and the organisation was yesterday not responding to any calls.

Dr Dekker says the 'intimidation' against her started in March, as she was flying to Florida to give a speech on Syria's weapons programme to an intelligence summit. She says she was subjected to a 'heavy-handed' interrogation by a man she suspects of being a British intelligence operative.

She believes the speech made her powerful enemies because she argued that billions of dollars spent by the US government to develop a smallpox vaccine has been wasted because scientists – including British experts – have used a different viral strain to the one she believes is being developed in Damascus. 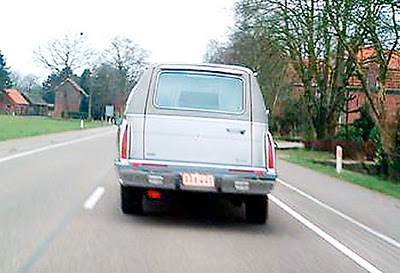 'Mysterious': The hearse which Jill Dekker followed and photographed

If this is true, it means governments would have no way of protecting the public against the use of the virus by terrorists or rogue states.

She also believes that Iraq did have a biological weapons capacity which was all shipped to Syria before the outbreak of war.

She argues this was known, but was concealed from the public because the real purpose of the war was not to target weapons of mass destruction but to topple Saddam Hussein and gain a strategic foothold in the region.

When she returned to her home in Belgium after the speech she said she was subjected to an overt campaign of surveillance and harassment, including being continuously followed on foot and having cars parked outside her house with the headlights on.

On one occasion, she says she found a hearse parked outside her house with the drivers 'staring straight ahead.' When she approached, it sped off and she pursued it, taking photographs as evidence.

After being told that Mr Baker was writing a book about the circumstances surrounding Dr Kelly's death, she sent him an email on March 23 designed, she says, to highlight the risk she felt she was under.

'I've informed all my diplomatic friends that not only am I not suicidal, I am looking forward to my children growing up and . . . also my great career,' she wrote. 'Much like other people who suddenly were found dead in woods.'
A week later, she wrote: 'The US State Department and their surrogates... continue to intimidate me and my family – every day they are outside my home, they tail me 24/7 – I believe they could try to kill me so I don't reveal any more of my research on Syrian biological weapons.'

In a third email in April, she wrote: 'I refuse to be intimidated by anyone who uses the tactics they used – so unprofessional even people inside can't believe how they have acted here – it's like Johnny English [the 2003 spoof spy film starring Rowan Atkinson as an incompetent British agent], really so amateurish. Our services just aren't what they used to be.'

It is difficult to establish whether there is any truth to Dr Dekker's claims of harassment, as she refuses to disclose the precise location of her home 90 minutes drive from Brussels for 'security reasons'.

She says the Belgian government extended its protection to her three months ago by making her a Belgian citizen, and is investigating her claims through its public prosecutor's office. The Government confirms that she is now a Belgian national.

Dr Dekker has given a detailed account to The Mail on Sunday of the alleged campaign of intimidation, which she believes was led by American and British intelligence.

She tells how she was subjected to an 'amateurish' interrogation by the British man on the plane to Florida.

'The plane was absolutely packed, and there was just one seat next to me that was empty. The plane was held up to let the final passenger on board,' she said.

'He then started asking me questions regarding my occupation, quite sensitive things about Nato and the like, to the point that I turned and said to him, 'OK, go down the list'.

'He then backed off but continued throughout the flight to be intrusive. He had this whole cover story about why he lived in Holland, right down to financial documents he showed me.

He asked me right out of the blue about Isotopes – now there's a word you don't hear everyday on a transatlantic flight.'

When she returned to Belgium after the conference she says was followed relentlessly on foot and by car, and had vehicles parked outside her house – often with darkened windows and their headlights fullon in broad daylight.

Of her encounter with the mystery 'hearse', she said: 'No one in our neighbourhood had died and the agents sitting in the front wouldn't make any eye contact, just stared straight ahead.

'I was pretty ticked off so I decided to pull my car out and follow them. They took off so fast – they must have been driving at around 100 kph through the countryside. Then they followed me the next day with this hearse with Belgian plates all the way home.'

She says that after 'making a few calls', she was placed under the protection of the local police. The 'campaign' then stopped, having lasted just over a month.

'It was unbelievable to me that I had to ask another government for protection against my own,' she said. She kept a daily 'harassment' diary, which she has handed to the Belgian authorities.

Dr Dekker, who says she met David Kelly before the Iraq war at Wilton Park, a countryside conference centre used by the Foreign Office, agrees with Mr Baker's conclusion that he was murdered.

Dr Kelly, the UK's leading weapons inspector in Iraq, was found dead in woods close to his Oxfordshire home in 2003, after apparently committing suicide.

He had been highly critical of the intelligence used to justify the invasion of Iraq, and in particular the infamous assertion that Saddam had weapons of mass destruction which he could deploy at 45 minutes notice.

Speculation about potential culprits who might have had a motive to silence him has ranged from 'special ops' units of the intelligence services to expatriate Iraqi opponents of Saddam.

Mr Baker writes in his book The Strange Death of David Kelly, which is published tomorrow: 'I have met Dr Dekker on two occasions and had a number of long exchanges with her. She does not strike me as the sort either who would frighten easily, or who would ginger up her story for effect.

'Rather, she is a somewhat hardnosed, intelligent and knowledgeable woman who has succeeded well in a profession where men predominate. I therefore took it seriously when she emailed me.'

Dr Dekker emerged from the shadows of what she says has been a 20-year career as a scientist in 2005, when internet records show that she was a 'bio-defence consultant' for the Brussels-based thinktank New Defence Agenda.

The organisation, which bills itself as 'platform for discussing Nato and EU defence and security issues', names former Hong Kong Governor Chris Patten and former Nato secretary general Lord Robertson among its patrons.

But critics have called it the arms industry's 'weapon of mass disinformation' because of the partnerships it has established with companies such as BAe Systems, Lockheed Martin and Thales.

The International Intelligence Summit, which she addressed in Florida, described itself as 'a nonpartisan, non-profit, neutral forum that uses private charitable funds to bring together intelligence agencies of the free world and the emerging democracies ... the purpose of The Summit is to provide an opportunity for the international intelligence community to listen to and learn from each other, and to share ideas in the common war against terrorism.'

The publicity for the conference said: 'The list of presenters will include many of the top leaders of the intelligence, espionage, counterterrorism and counter-intelligence agencies from around the free world. The Summit is intended to be the most prestigious world conference on international studies, intelligence policy, terrorism, and homeland security.'

The Summit flagged up Dr Dekker by saying she 'regularly consults with Ministries of Public Health, Ministries of Foreign Affairs and Ministries of Defence on issues related to Mid-East state bio-warfare programmes'.

It added that she 'has advised the European Commission on bio-terterrorism and stockpiling for Category A bio-warfare agent countermeasures; resulting in (COM (2004) 701 Communication from the Commission to the Council and the European Parliament Preparedness and consequence management in the fight against terrorism'.

Asked if she knew anyone who could back up her claims of intimidation, she referred us to one of her friends, who spent 20 years as a CIA officer and now works as a consultant.

He said: "She told me what happened, and I believe it. What she described is known as heavy harassing surveillance, with the purpose of intimidating."

Dave Thomas, the local police inspector who was entrusted with Dr Dekker's protection, said he had done so on the orders of the Belgian ministry of the interior.

Speaking in accented English almost as good as his distinctly un- Belgian name would suggest, he said: "It is true that we were told to look after her. They said she was an important person who felt under threat."

But he did not go into details into what action his force had taken.

A spokesman for the Interior Ministry said the order had come from the country's Crisis Centre, Belgium's emergency planning department.

He said: "Jill Dekker specialises in bioterrorism. She reported to us that she felt she was being threatened by foreign intelligence services, and we received an instruction from the Crisis Centre on March 21 that she should be protected. The protection was withdrawn on July 7."

Last night, Mr Baker said he believed Dr Dekker could have made enemies by exposing a fallacy at the heart of military action against Iraq.

"If the war was really about WMD, then to be consistent we should also invade Syria," he said.

"Otherwise, it suggests that it was more about giving Saddam a bloody nose."