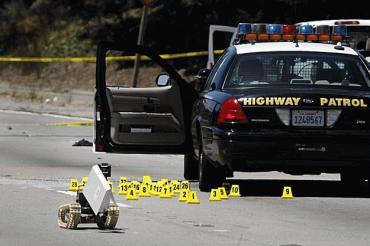 (07-18) 17:59 PDT Oakland -- A 45-year-old parolee, described by his mother as angry at left-wing politicians, opened fire on California Highway Patrol officers on an Oakland freeway early Sunday and was hit by return fire while wearing body armor, authorities said.

Byron Williams of Groveland (Tuolumne County) was taken to the emergency room at Highland Hospital, where he was in stable condition. Police did not describe his injuries. Two officers suffered minor cuts from flying glass.

Williams was arrested on suspicion of attempted murder for shooting at the CHP officers and Oakland police said he may face other charges.

They did not release his name, but reporters identified him from the license plate of the vehicle, which was registered to his mother.

The incident started around midnight when two CHP officers tried to stop a white Toyota Tundra pickup that had been speeding and weaving in and out of traffic on westbound Interstate 580, said CHP Officer Sam Morgan.

The officers used a loudspeaker to direct the driver off the freeway, but he stopped on I-580 west of Grand Avenue, Morgan said.

As officers walked toward the pickup, they saw the man pick up a handgun, police said. They said they returned gunfire and radioed for help.

Three CHP vehicles had their windows shot out, but no officers were shot, police said. They said the driver was armed with a rifle and a shotgun as well as the handgun and fired at least two of the weapons during the shootout.

Morgan said the driver was hit numerous times and survived only because he was wearing a bullet-resistant vest.

Westbound lanes of the freeway remained closed for most of Sunday while eastbound lanes were closed sporadically. Police would only say that the reason for the unusually long highway closure was to allow officers to collect evidence and investigate the case.

At one point, police brought in a bomb squad to detonate some items that turned out not to be explosives.

Williams' mother, Janice Williams of Groveland, said her son had been living next door and taking care of her father's house and land. She said he had been released from prison about 2 1/2 years ago after a felony conviction, which she declined to describe, and had almost completed his parole.

"He hasn't been able to get a job because he's an ex-felon and nobody will hire him," she said.

She said her son, who had been a carpenter and a cabinetmaker before his imprisonment, was angry about his unemployment and about "what's happening to our country."

Williams watched the news on television and was upset by "the way Congress was railroading through all these left-wing agenda items," his mother said.

She said she had planned to make salsa with her son on Sunday and was making preparations when she got a call from a television reporter, looked out the window and saw that her pickup truck was gone.

She said she then checked the locked safe where she kept her guns, all legally purchased and owned, and found that they were also missing.

Janice Williams said she kept the guns because "eventually, I think we're going to be caught up in a revolution." But she said she had told her son many times that "he didn't have to be on the front lines."

She said she had no explanation for his actions.

"Something snapped," she said. "His life is over. He will go back to prison for the rest of his life. Our lives are over."