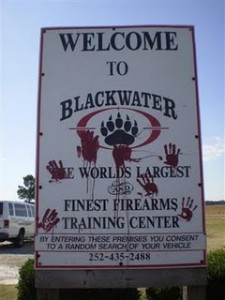 The head of Blackwater and his employees may have killed or ordered the killing of people suspected of cooperating with federal investigators probing their activities, according to an anonymous affidavit filed in federal court Monday.

The affidavit, one of two filed Monday, makes an extraordinary bundle of claims about the former Blackwater CEO, Erik Prince, and his employees. The existence of the documents was first reported by the Nation magazine Tuesday.

They were filed as part of a civil suit against Prince and Blackwater by several Iraqis, which accuse the firm and owner of war crimes, wrongful death and more.

The men gave the affidavits as “John Doe” and “John Doe 2,” saying they feared for their safety. “Mr. Prince’s management has personally threatened me with death and violence,” wrote Doe 2. He says also that others told him “Mr. Prince and his employees murdered, or had murdered” one or more people who had cooperated with the feds, or were planning to.

But allegations of murder just scratch the surface: the two men – one alleges he is an ex-Marine, the other says he shared his allegations with a federal grand jury – claim far more. John Doe 2 claims routine murderous violence against Iraqis, a wife-swapping sex ring, use of child prostitutes, gun-running and more by Blackwater employees. John Doe 2 describes Prince as viewing himself as “a Christian crusader tasked with eliminating Muslims and the Islamic faith from the globe,” who intentionally sent like-minded mercenaries to Iraq “to take every available opportunity to murder Iraqis.”

In a statement Tuesday, a spokeswoman for the firm – since renamed “Xe” – said the allegations were “unsubstantiated and offensive.” Stacy DeLuke accused the plaintiffs’ lawyers of having “chosen inappropriately to argue their case in the media.” A lawyer for Prince and Blackwater, Peter Hugh White, declined to comment on the affidavits.

The company has been the target of at least four grand jury investigations and accusations of tax fraud, improper use of force, arms trafficking and overbilling. The firm has denied any wrongdoing.

In February, Blackwater changed its name to Xe. Prince stepped down as its president in March. He is still the company’s owner and the chairman of its board of directors. The firm no longer enjoys a billion-dollar contract to protect State Department personnel in Iraq, as it once did, although it still provides aviation services for U.S. government personnel there. The Iraqi government has tried unsuccessfully to boot Blackwater personnel from operating in its country.

The victims on whose behalf the affidavits were introduced include Iraqis who died in the infamous 2007 Nisoor Square fiasco, in which Blackwater guards opened fire on Iraqi civilians and 17 people died. They are being represented in this suit by the Center for Constitutional Rights and the Washington, D.C-based lawyer Susan Burke. Both declined to discuss the affidavits. In his affidavit, “John Doe 1” alleges that Blackwater personnel routinely attacked and killed innocent Iraqis who posed no security threat, sometimes without informing the State Department of the incidents, and that they sometimes used powerful automatic weaponry that was barred by their State Department contract. He also said that Blackwater personnel destroyed videos that showed them conducting criminal acts of violence.

“John Doe 2” alleges that Blackwater personnel used hand grenades and grenade launchers, and that Prince obtained exploding bullets for his men to use. Such weaponry and ammunition were barred by the firm’s contract with State.

“Doe 2” also claims that Blackwater executives at the company’s North Carolina headquarters ran a “wife-swapping and sex ring,” which caused so many interoffice disputes Prince ordered an internal investigation into the scheme. Additionally, he says that Blackwater personnel overseas used child prostitutes.

Both men allege that Prince and his employees smuggled illegal weapons into Iraq. “Doe 2” says that he did so using his subsidiary, Presidential Airlines, which continues to hold a State Department contract.

“It is obvious that Plaintiffs have chosen to slander Mr. Prince rather than raise legal arguments or actual facts that will be considered by a court of law,” said Xe’s DeLuke. “We question the judgement of anyone who relies upon and reiterate anonymous declarations.”

As I Say, Ward Churchill is an Agent Provocateur
Aug 06